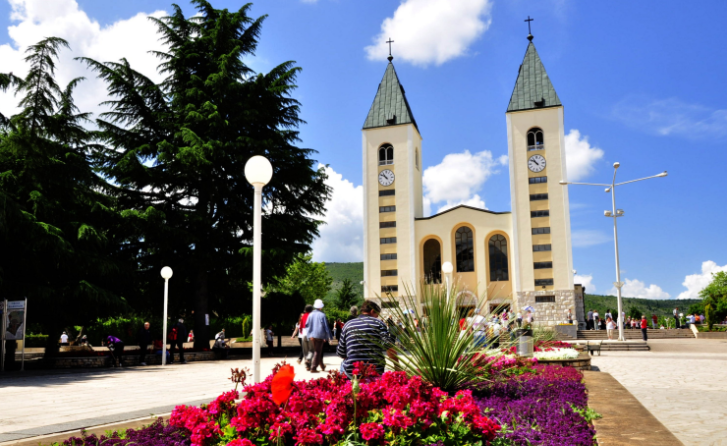 Timeline of Church’s Response to Medjugorje

Please note: A more recent post regarding this subject is available. To read the updated timeline, please visit: Updated Timeline on Church’s Response to Medjugorje.

Timeline of the Church’s response to Medjugorje

1981: Apparitions of Medjugorje begin, taking place in the Diocese of Mostar, in the former Yugoslavia, now called Bosnia-Herzegovina.

1984: Bishop of Mostar, Pavao Zanic, forms a commission to investigate the events in Medjugorje.

1986: Bishop Zanic submits a negative decision about Medjugorje to the Congregation for the Doctrine of Faith (CDF), which at the time was led by Cardinal Joseph Ratzinger (later, Pope Benedict).

In its statement, they make three things clear:

Here is their statement in full:

DECLARATION
The bishops, from the very beginning, have been following the events of Medjugorje through the Bishop of the diocese [Mostar], the Bishop’s Commission and the Commission of the Bishops Conference of Yugoslavia on Medjugorje.

On the basis of the investigations so far it cannot be affirmed that one is dealing with supernatural apparitions and revelations. However, the numerous gatherings of the faithful from different parts of the world, who come to Medjugorje, prompted both by motives of belief and various other motives, require the attention and pastoral care in the first place of the diocesan bishop and with him of the other bishops also, so that in Medjugorje and in everything connected with it a healthy devotion to the Blessed Virgin Mary may be promoted in accordance with the teaching of the Church. For this purpose the bishops will issue specially suitable liturgical-pastoral directives. Likewise, through their Commission they will continue to keep up with and investigate the entire event in Medjugorje.” See Statement Text

1991-present day: The decision of the Medjugorje Commision, as described in the statement above, remains the official position of the Church.

1992: Bishop Pavao Zanic retires and Bishop Ratko Peric is installed as Bishop of the Diocese of Mostar. Just like his predecessor, Bishop Peric is against the Medjugorje apparitions, and is vocal about his opposition, however, since the Vatican decision of 1986 (see above) the Bishop of Mostar does not have jurisdiction regarding the authenticity of the Medjugorje apparitions. Bishop Peric’s opposition to Medjugorje is not binding for Catholics. The 1991 statement (see above) continues to be the official position of the Church regarding Medjugorje.

2010: The Vatican forms a new commission to investigate the apparitions. The commission is headed by Cardinal Camillo Ruini, retired Vicar General of Rome and is made up of 16 members. Noticeably absent from this commission is Bishop Ratko Peric, Bishop of Mostar.

2014: Investigation of Medjugorje by the Cardinal Ruini commission is completed, and submits findings to the Congregation for the Doctrine of Faith.

February 11, 2017: Pope Francis appoints Archbishop Henryk Hoser of Krakow Poland as Papal Envoy to Medjugorje.  At the time of the announcement, the Vatican Secretariat of State said:

“The mission (of the Papal Envoy) has the aim of acquiring a deeper knowledge of the pastoral situation there and above all, of the needs of the faithful who go there in pilgrimage, and on the basis of this, to suggest possible pastoral initiatives for the future,”   Read More

March 30, 2017: The Papal Envoy arrives in Medjugorje with plans to stay for 3 months, to evaluate the pastoral needs of Medjugorje and report back to the Holy Father. Upon his arrival, Archbishop Hoser speaks to the gathered crowd and says:

“We are in the place that gathers many pilgrims. Let us all together pray for the intercession of the Mother of God, so she would open our hearts to the grace of God, so she would open our minds to the grace of God, to the teaching of the Church and to the Word of God. Our life is the Holy Spirit; the Holy Spirit is the soul of the Church. We seek for God’s truth, God’s truth about ourselves, but we also seek for the truth about man. This place of prayer is now famous in the whole world, and the Holy Father is very interested in the development of devotion of the faithful that takes place here. This is also part of my mission – to evaluate the pastoral activity that takes place here and to suggest some guidelines that should be accomplished in the future. I come from the country that has special devotion towards the Mother of God. Mary is the Queen of Poland. My wish to all of you is to make Mary the Queen of your lives. For the time being, this is what I have to say.”   Watch Video

4/1/17: Archbishop Hoser celebrates his first Holy Mass in Medjugorje. In his homily, he makes the following comments about Medjugorje:

“We call Her, especially here, the Queen of Peace. … Therefore, that honoring, so intensive here, is of the greatest importance and is necessary to the whole world. We pray for peace because the destructive forces are tremendous today. … We need a Heavenly intervention. The presence of our Blessed Virgin Mary – that is this intervention. It is God’s initiative. … Therefore, I would like to encourage and fortify all of you, on behalf of the Pope as his Emissary. … The greatest miracle of Medjugorje – it is confessions we have here. The Sacrament of Reconciliation and Mercy. It is the Sacrament of Resurrection. … As the brothers Franciscans told me, pilgrims are coming here from eighty different countries throughout the world.  This calling has been spread to the ends of the world, just as Jesus said to the Apostles, sending them into the world.  You are the witnesses of the love of Christ and the love of His Mother and the love of the Church.” Read His Full Homily

April 5, 2017: Papal Envoy, Archbishop Hoser holds a press conference in Medjugorje, where he states many very positive things about Medjugorje.

“When it comes to the importance of this place of pilgrimage, it could be compared to others too. For instance, two and a half million pilgrims come to Medjugorje each year, while six million go to Lourdes. … How come so many pilgrims come here? … those who come here, discover something extraordinary. … They discover a huge range of profound spirituality. They re-discover or discover for the first time in their lives the meaning of the sacred reality. In Medjugorje, they can have an experience with sacred time and sacred space. … Usually we hear that Medjugorje is a place of Marian devotion, and that is the truth, however, if we enter into the depth of it, we can see that devotion in Medjugorje is very Christ-centered, as the center of  devotion is the celebration of the Eucharist, the transmitting of the Word of God …

Medjugorje is a very fertile land from a religious perspective. In these years we can count 610 religious and priesthood vocations born in Medjugorje. … When we are aware of the crisis of vocations … it is clear that there is something new here, something remarkable.

So, in my opinion, it is important to pray to Our Lady of Peace. The specific role of Medjugorje is extremely important here. … You, my dear friends, should be the carriers of the joyful news. Say to the whole world that in Medjugorje we can find the light again. We need those special places of light in the world that is sinking into darkness.”  Read Entire Statement