In 2010, Pope Benedict visited Santiago de Compostela, the resting place of St. James the Greater, Apostle of Jesus, and the destination of thousands of pilgrims each year.  He was one of a record number of pilgrims to visit that year.  This record occurred because it was the most recent Holy Year, which is celebrated when the feast of St. James – July 25th – falls on a Sunday.  During that year, over 1.43 million overnight stays in the city of Santiago were recorded, and nearly 273,000 pilgrims received their Compostela, certifying they completed the prescribed length of the Camino on foot or bicycle.

Though visiting the magnificent cathedral and reveling in its mix of Gothic, Romanesque, Baroque, and Neoclassical architecture while watching the world’s largest censer fly through the air, is something anyone can do, a pilgrimage is something more. As Pope Benedict himself said to those gathered in the cathedral:

To go on pilgrimage really means to step out of ourselves in order to encounter God where he has revealed himself, where his grace has shone with particular splendor and produced rich fruits of conversion and holiness among those who believe. Above all, Christians go on pilgrimage to the Holy Land, to the places associated with the Lord’s passion, death and resurrection. They go to Rome, the city of the martyrdom of Peter and Paul, and also to Compostela, which, associated with the memory of Saint James, has welcomed pilgrims from throughout the world who desire to strengthen their spirit with the Apostle’s witness of faith and love. (November 6, 2010)

A pilgrimage along the Camino certainly offers numerous opportunities to step out of oneself, and hopefully allows pilgrims to more deeply encounter the Lord.  Through the spirit of other pilgrims, the generosity of hosts, the beauty of nature, and the splendor of the cathedral, the Camino beckons pilgrims from all corners of the world to trace some of the journey of St. James and venerate his relics and worship God in Santiago.

As July 25, 2021 is also a Sunday, pilgrims are once again invited to follow in the footsteps of millions, including Pope Benedict, to visit Santiago during the Holy Year. The Papal Nuncio officially inaugurated this solemn occasion by opening the Holy Door on December 31, 2020.  As previously discussed , due to current travel restrictions and regulations, this year’s Jubilee will actually be extended until the end of 2022, giving more pilgrims the opportunity to experience this unique opportunity.

This is good news for both pilgrims as well as the residents of Spain who depend upon pilgrims for part or all of their livelihood, as the past year has affected both.  Last year was gearing up to be another record-setting one with over 5000 pilgrims requesting their Compostela in just the first two months of 2020.  After virtually no pilgrims from April-June, there was a significant rebound over the summer, especially in July, but mainly for pilgrims from Spain itself, who didn’t have to contend with border-crossing restrictions.  Unfortunately, with increased restrictions in the fall and winter came decreased pilgrim activity.  Only 74 pilgrims registered for their Compostela total for January and February of this year – more than a 98% decrease over the same time period the year before.

With many restrictions on movement, occupancy rates, and normal Camino activities, pilgrims and hosts alike have had to adapt their Camino plans.  Some pilgrims stayed home altogether, walked and hiked in local areas, or joined virtual pilgrimages, logging their miles walked around their neighborhoods to see how far along the Camino they would have traveled.  Likewise, some hosts have taken extended leave from their albergues, throwing themselves into other work in the meantime.  We pray, for their sake, and for the history and culture of the Camino, that once pilgrimages begin again, they will return to their hosting duties.

There is a saying amongst pilgrims who walk the Camino, in reference to how things work out along the journey - the Camino provides.  As one translation of “Camino” is “way,” and Jesus is the Way, the Truth, and the Life, this is interpreted as referring to how the Lord does truly provide for all of our needs – even when things seem uncertain – not only along the Camino or while on pilgrimage, but in everyday life as well. 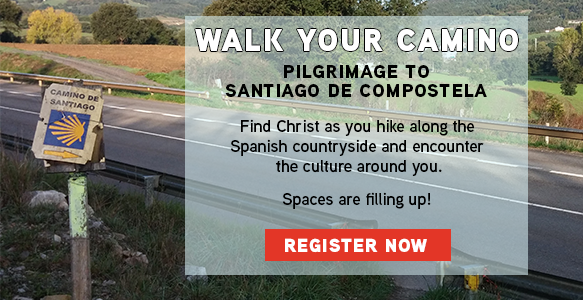