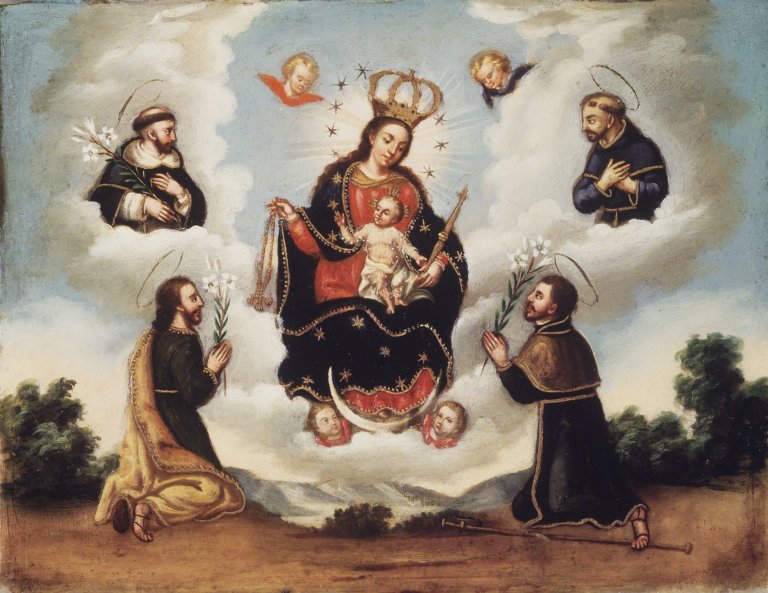 The Rosary: Prayer of Power and Consequence

The Rosary has a long and rich history. While it’s origins are often disputed, one thing those who pray the Rosary can agree with is this: it is a prayer of great power and consequence. From turning the winds to bring about victory in battle, to turning a satanist into a saint, this prayer of Our Lady has proven its importance, and been witnessed to by countless popes.

The Battle of Lepanto

In 1571, the Ottomans were on a mission to conquer Christian lands,  but there was one city the Turkish sultan wanted more than any other – the Holy City of Rome. He dreamt of turning St. Peter’s Basilica into a mosque, just as they had done with the Hagia Sophia. One battle stood between the sultan and the Christian east.

Knowing the magnitude of what was at stake, Pope Pius V ordered churches throughout Italy opened, and instructed the faithful to take up their rosaries. Aboard the ships of the Holy League, priests heard confessions and offered Masses on every boat the night before battle, and the Pope gave a plenary indulgence to every member of the Holy League army. Commander Don John unchained the prisoners who were rowing belowdecks and gave them all weapons, promising their freedom if they fought bravely. More importantly, he gave every man the most powerful weapon of all: a rosary. The men spent most of the night in prayer, joining together in one final prayer before the battle began.

Shortly after the battle began, the wind shifted 180 degrees. The sails of the Holy League were filled, while the Ottoman’s, suddenly sailing against the wind, were forced to take down their sails and resort to rowing, a task carried out by Christian slaves beaten by whips below decks.

Against all odds, the Christians won the battle. Of the 300 Turkish vessels that entered into the battle, only 13 remained, and more than 30,000 Turks were slain. The Christian west was saved, and – though it wouldn’t be the last battle fought – it was the seminal moment that turned the tide in protecting Christianity in Europe and beyond. Attributing the victory to the work of Our Lady, through the Rosary, Pope Pius declared a day of celebration. Ultimately, this day would come to be celebrated on October 7th as the Feast of the Holy Rosary.

The Rosary provides in spiritual conflict as well. Bartolo Longo was the son of wealthy and devout Catholic parents, both of whom prayed the Rosary every day. In the late 1800s a young and disillusioned Bartolo, having lost his beloved mother, was studying law at the University of Naples. Through the influence of acquaintances, Bartolo began dabbling in the occult and pagan rituals. He was eventually “ordained” a satanic priest, after which he focused on undermining the Catholic Church and ridiculing all things Christian. His demonic obsession (slightly different than possession), began to cause declining physical health, extreme depression, paranoia, and eventually a mental breakdown. After hitting bottom, he heard his deceased father’s voice telling him: Return to God!

A friend of Bartolo’s put him in touch with a Dominican priest who heard his confession and received him back into the Church. Shortly afterward, Bartolo experienced a mystical locution, during which he heard the priest repeating these words to him: “If you seek salvation, promulgate the Rosary.” He was so moved that he dedicated his life to spreading devotion to the Rosary. He eventually became a Third Order Franciscan, taking the name Brother Rosario. Today, the basilica he built in Pompeii still welcomes millions of pilgrims a year to see the church built by a former satanist who dedicated the rest of his life to sharing the truth of the faith through the Rosary. Having been beatified in 1980, Bartolo is now “Blessed Bartolo,” proving that the Rosary can save souls as well as win battles.

The Devotion of Popes

Countless popes have been significantly influenced by the Rosary, and held strong devotion to the prayer. Both Pope Pius V and Pope Leo XIII have been called the “Pope of the Rosary,” and Pope Francis calls it the “prayer of my heart.” In  his Apostolic Letter Rosarium Virginis Mariae, St. Pope John Paul II reminds us that the Rosary, “simple yet profound… still remains, at the dawn of this third millennium, a prayer of great significance, destined to bring forth a harvest of holiness.” Moreover, he states that “one cannot recite the Rosary without feeling caught up in a clear commitment to advancing peace...”

In these times, when violence stretches its fingers into our concerts, our schools, and our churches, let us remember the power of the Rosary. It is a power that doesn’t rest in beads laying dormant on our coffee tables, but in prayers that issue from our hearts as we supplicate:

Our Lady of the Holy Rosary, Queen of Peace, pray for us.