Moses: Pilgrimage to the Promised Land

excerpted from "Great Pilgrims of the Old Testament"

Many years after the death of Joseph, the new kings had no appreciation of how Joseph had saved Egypt from the great famine. The Hebrew people had become so numerous, that the pharaoh began to fear them and decreed that all male Hebrew babies must be drowned at birth to prevent them from growing up and becoming soldiers who would battle against Egypt.

Moses’ mother hid her newborn for three months before placing him in a wicker basket in the reeds of the Nile River. When Moses cried, he was heard and rescued by one of the pharaoh’s daughters who adopted him (Exodus 2:7). She named the child Moses, which in Hebrew means “drawn out of the water” and in Egyptian means “son.” This began God’s plan to free this people from 400 years of slavery. How appropriate that Jesus would be drawn up out of the water to save the world from slavery to sin!

Moses grew up in the pharaoh’s palace, where he learned to read and write – preparing him to later write the first five books of the Bible. Although he was quite comfortable in the palace, he longed to see his own people as he grew older. When he witnessed an Egyptian overseer beating a Hebrew slave, he struck the Egyptian and killed him. When the pharaoh learned that Moses was the murderer, he ordered his execution (Exodus 2:12).

Moses fled to the land of Midian and came to a well where seven daughters arrived to draw water for their father’s flock. When shepherds tried to drive them away, Moses came to their defense. After the daughters told their father what had happened, he invited Moses to dine with them and gave his daughter Zipporah in marriage. They had a son and named him Gershom, which means “stranger in a foreign land.”

Moses became a shepherd in Midian, and one day while he was tending his sheep, God appeared to him in a burning bush. He told Moses to return to Egypt and become the leader of his people. Moses asked God, “Who am I that I should go to Pharaoh and bring the Israelites out of Egypt?” God answered: “I AM who I AM. Tell the Israelites, ‘I AM has sent me to you’” (Exodus 3:14).

Moses did as the Lord commanded. When the pharaoh refused to release the Hebrews, Egypt was afflicted with 10 plagues. After each of the plagues Pharaoh said he would let the Israelites go if God put things back the way they were, but the pharaoh kept changing his mind. (He obviously hadn’t heard that God just doesn’t give up.)

The Lord told Moses that with the final plague every first- born son in Egypt will die, even the son of Pharaoh. Moses warned the pharaoh, but he refused to listen.

The Lord told Moses that to keep the Israelites safe during the final plague they must kill their best sheep or goat and smear its blood on the sides and tops of the doors of their homes. God said, “Seeing the blood, I will pass over you; thereby, when I strike the land of Egypt, no destructive blow will come upon you. This day will be a day of remembrance for you, which your future generations will celebrate with pilgrimage to the Lord; you will celebrate it as a statute forever” (Exodus: 12:13-14).

The pharaoh called Moses and Aaron saying, “Leave my people at once. Go and serve the Lord as you said. Take your flocks and your herds and go; and bring a blessing on me, too!”

Pharaoh changed his mind yet again and gathered an army of 600 soldiers. When the Israelites saw the pharaoh coming after them, they questioned why Moses would lead them into the desert to die. Moses told them, “Do not fear! Stand your ground and see the victory the Lord will win for you today. For these Egyptians whom you see today, you will never see again. The Lord will fight for you.”

When the Israelites reached the Red Sea, they were trapped with the sea in front of them and Pharaoh behind them. God told Moses to reach out his staff into the water, and when he did, the water parted, making two huge walls of water. The Israelites passed through the walls of the Red Sea on dry ground.

Pharaoh’s army followed them into the sea, even though some of the Egyptians were afraid. When the Israelites had safely passed, God told Moses, “Stretch out your hand over the sea, that the water may flow back upon the Egyptians, upon their chariots and their horsemen.”

Not one of Pharaoh’s army escaped. When the Israelites saw the soldiers lying dead on the seashore and the great power that the Lord had shown against Egypt, they feared the Lord. They believed in the Lord and in Moses, his servant (Exodus 14:30-31).

During their 40-year journey from Egypt to Canaan, God revealed himself to Moses and his people many times.

In the desert of Elim, God rained down bread from heaven, providing meat in the evening and bread in the morning when his people became tired and hungry (Exodus 16:4-8).

God poured forth water from a rock in the desert when his people became thirsty (Exodus 17:6).

The people met God at the foot of Mount Sinai when He appeared in a cloud of thunder to affirm the promise he made to Abraham. God continued to speak through Moses, giving him direction for civil and ceremonial law.

While Moses communed with God for 40 days on Mount Sinai, God presented the 10 Commandments on stone tablets. Because Moses had been gone for so long, the people had grown restless. They built an altar and a golden calf, returning to the idolatry practiced in Egypt. When Moses descended the mountain and saw what they had done, he was so angry that he threw down and shattered the tablets. God was angry, too, and wanted to destroy the people. Moses convinced him not to. Moses burned the golden calf, and God instructed him to chisel two new stone tablets.

Through God’s divine inspiration, Moses authored the first five books of the Bible – the Pentateuch – which includes Genesis, Exodus, Leviticus, Numbers, and Deuteronomy.

Because Moses once showed distrust toward God when he struck the rock twice (rather than once as instructed), Moses was not permitted to complete his pilgrimage to Canaan. God led Moses to the top of Mount Nebo where he showed him the whole land and said, “This is the land about which I swore to Abraham, to Isaac, and to Jacob, saying, ‘I will give it to your descendants.’ I have let you see it with your own eyes, but you shall not cross over there.” Moses then died at the age of 150, just as the Hebrews entered the promised land (Deut. 34:1-5).

The Exodus was a journey of faith, the most important pilgrimage of the Jewish people. The exodus of Jesus in Jerusalem would follow a similar pattern thousands of years later.

LESSONS FROM THE JOURNEY

Moses followed God’s commands despite personal danger and overwhelming odds. God worked tremendous miracles through him, showing us that a heart surrendered to God can do the impossible.

Seeing the blood, I will pass over you; thereby, when I strike the land of Egypt, no destructive blow will come upon you. This day will be a day of remembrance for you, which your future generations will celebrate with pilgrimage to the Lord; you will celebrate it as a statute forever. 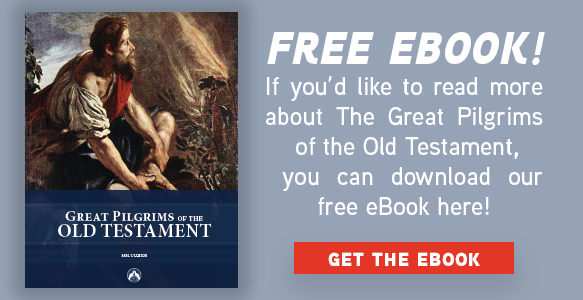