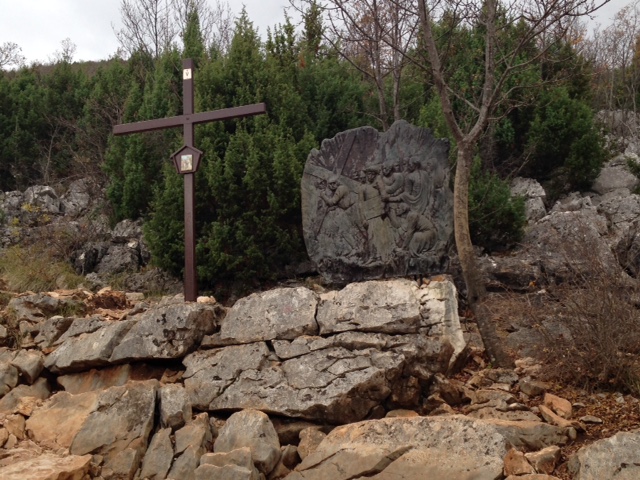 The following is the true story of a recent Tekton pilgrim, who traveled to Medjugorje, followed by retreat with Fr. Zlatko Sudac, from Nov. 28th to Dec. 8th, 2017.

“You just need to start.”

“Excuse me?” Sheila asked, turning to the man who had spoken to her out of nowhere.

“You just need to start,” the shopkeeper repeated, and returned to his work.

Sheila’s arms prickled with goosebumps and she stared at the man as he organized souvenirs on a nearby shelf. Start what? she wondered. She sensed that the man’s words were no accident. They were meant for her, and they held a deep meaning. Now, she just had to figure out what that meaning might be.

The question continued to plague her as she went about her day in Medjugorje. It was only her second day in the town, and she still felt slightly out of her element. A fallen-away Catholic, in a place that was distinctly Catholic. Crucifixes were everywhere, and paintings and statues of Mary and Jesus decorated nearly every wall. Looking at the schedule for the next eight days read like a total immersion in Catholicism – daily Mass, countless Rosaries, opportunities for Confession, and visits with priests, religious and supposed visionaries.

The following morning, Sheila stood at the foot of Cross Mountain. She had made up her mind before the pilgrimage began that she would not climb its rocky slopes. Plagued with knee problems – and with surgery scheduled for less than a month away – walking short distances on flat surfaces was difficult. There was absolutely no way her knees could withstand the strenuous and steep ascent of Cross Mountain.

But the shopkeeper’s words continued to play through her mind: “You just need to start.” She had prayed and prayed, attempting to decipher why the man, a complete stranger, had been led to say those words to her. She watched as one of her fellow pilgrims began the ascent, her heart beating hard in her chest. There was no way she could do this.

“All things are possible with Christ,” the words came, unbidden, into her mind.  She took a deep breath, stepped onto the trail, and followed the shopkeeper’s advice. 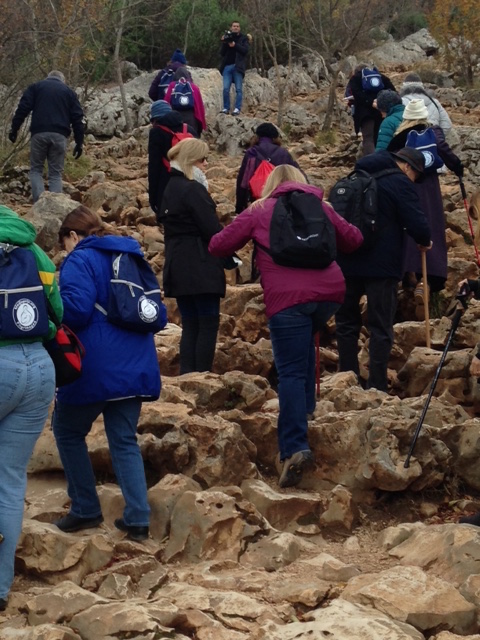 Sheila had been raised Catholic, but left the Church when she was 19, and she’d never looked back. Disturbed by a faith that seemed to be filled with people who made her feel judged and found wanting, where the judges themselves were hypocrites, she had gone to seek greener pastures. Pastures where Christians steeped themselves in the Bible, and where going to church was an experience in being fed, with vibrant pastors who set their congregations on fire for God’s Word and His will in their lives. She’d never experienced that within the Catholic Church, and found that her faith came alive when surrounded by such vibrant believers.

Her brother had hounded her for years to return to the Church, but she wanted no part of it. Every night before going to bed, she asked God, “Lord, was I pleasing to you today?” and as long as she felt the answer to that question was yes, she knew she was exactly where she was meant to be.

When her brother told her she needed to go to Medjugorje, and on retreat with Fr. Zlatko Sudac, she resisted. Her knee surgery was scheduled for a month after the retreat! She could barely walk around the grocery store, let alone walk around the town of Medjugorje. She had a daughter and grandchildren to care for at home, not to mention all of the help that she provided to her brother and his family. How could she possibly leave for ten days, handicapped and needed at home? Not only that, did she even want to go to this explicitly Catholic place, when she had been perfectly happy apart from the Church for more than thirty years? And would she feel strange, excluded, out of place, as the only non-Catholic among so many devout Catholics?

Nonetheless, when her brother offered to send her on the pilgrimage and retreat she was willing to pray about it. She’d seen the effect Medjugorje had had on her brother decades before, completely changing his life. She’d seen the changes within her mother as well, when she went more recently. And she couldn’t deny the draw of being on retreat with Fr. Sudac, a priest who had received the stigmata. She’d heard stories of his passion, commitment, and love for Christ, and she had heard that healing graces flowed abundantly at his retreats. While Sheila had accepted the medical crosses she bore, she couldn’t deny her deep desire for healing – whether spiritual or physical – if that was God’s will for her.

She prayed about it, and woke one morning with the certainty that she was meant to go to Medjugorje. Her brother booked the trip, Sheila packed her bags, and took the first step on an incredible journey.

There’s so much peace here, Sheila thought as she walked the streets of Medjugorje. Everyone was friendly, smiling, joyful even. Just imagine if you could just take this place and make the whole world so peaceful, she thought.

What was different? Where did the peace and joy come from? Sheila looked around and saw people with their rosary beads, praying together or quietly to themselves as they walked the city streets. She saw pilgrims kneeling in prayer before statues and images of the Blessed Mother. Swept up in the tide of everyone else’s prayer, she found herself praying the Rosary for the first time since childhood, and she noticed something truly remarkable within herself.

Prayer was nothing new to Sheila. She prayed all the time, and yet her prayers had never brought the profound peace that she 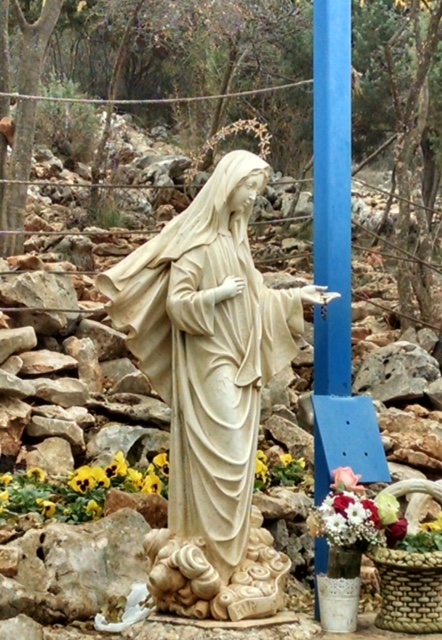 experienced while praying the Rosary. And the peace didn’t end with the final Amen, but continued into the minutes and hours that followed.

This peace was the peace of Christ, but why could she feel it more strongly here, in Medjugorje, than she had felt it back home in Indianapolis? Why was it stronger when praying the Rosary than during a powerful sermon at church? Why did the people here exude such peace and joy, when many of the devout Christians she knew still struggled against doubts and anxiety?

The realization slowly dawned: It was Mary. Mary, the Blessed Mother, called “the Queen of Peace,” who brought Christ into the world and continued to bring Christ into the lives of people throughout the world. Sheila realized that it is Mary’s entire mission – loving her Son and helping others to know him and love him. Mary truly is the Queen of Peace, bringing Christ who is Peace to the people in Medjugorje!

A mother can talk to a mother, and suddenly Sheila found herself conversing with Mary as a mother – her mother and Christ’s mother, seeking her help, her advice, her intercession. Laying her worries at Mary’s feet and asking her to place them at the feet of her Son. Having done so, Sheila was blessed with a peace and a joy unlike anything she could remember ever experiencing in her life.

One of her new Medjugorje friends continued to push Sheila to go to Confession, but she resisted. God knew her sins, and she had asked his forgiveness. Why did she have to confess to a man? Finally, she caved, and went to speak with the priest who had befriended her over the last few days. He took one look at her face and said, “Let’s go get coffee.” They walked to a nearby coffee shop and the world melted away as Sheila shared her story – the judgement and hypocrisy that had caused her to leave the Church, the lack of devotion and scriptural commitment that had kept her away, her longing to be fed in a church service which no Catholic Mass seemed to meet. For three and a half hours they talked, completely unaware of the time, the people coming and going, or the scheduled activities that they missed. Sheila sobbed as she laid it all out before this man of 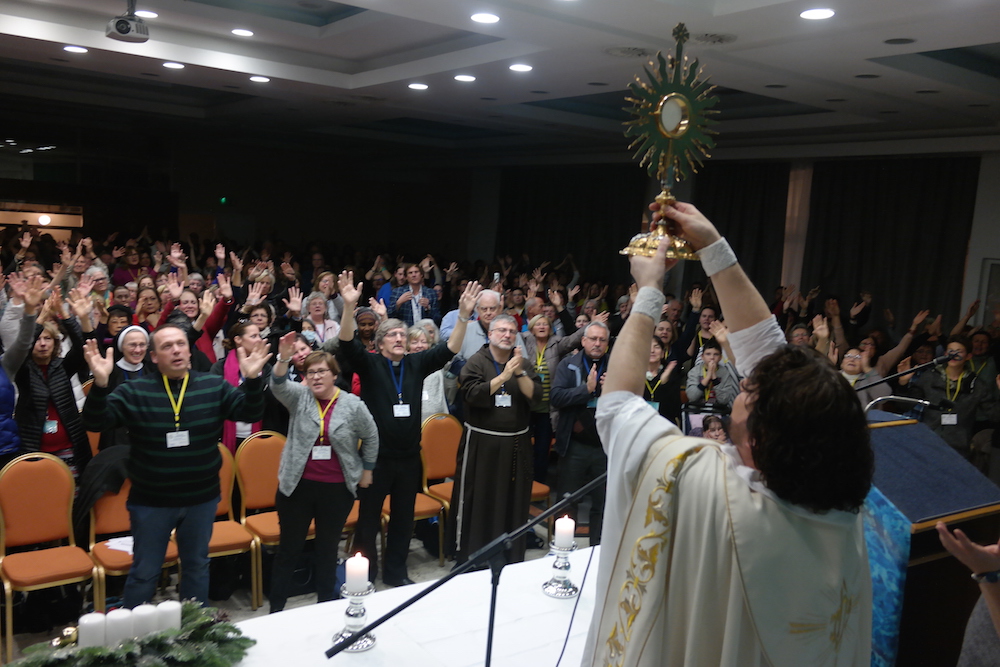 God and, while he didn’t answer her every disagreement and skepticism, she left with the sure knowledge of one thing: it was time to come home to the Catholic Church.

The next day, the group left Medjugorje and traveled to the Island of Krk, for a three-day retreat with Fr. Zlatko Sudac. When Father began speaking that evening, Sheila was stunned. She had seen peace, joy, and a remarkable love of Christ in many people in the town of Medjugorje, but Fr. Sudac… his love for Christ seemed to emanate from every pore. Truly, this priest has the authority of God speaking through him, Sheila thought.

The days of retreat continued to build upon the previous days of pilgrimage. Medjugorje had a huge impact on her, but the effect of Fr. Sudac’s retreat was nothing less than profound. Sheila finally went to Confession, and felt “clean.” She witnessed a priest, in the midst of a vocational crisis, return from a brief conversation with Fr. Sudac filled with new joy. She felt the overwhelming influence of the Holy Spirit at work among each and every one of the retreat participants, and she experienced the joy of knowing that she was exactly where God wanted her to be.

By the end of the pilgrimage, Sheila fully understood the words of that shopkeeper. “You just need to start,” he said. The next morning, she had accepted those words as a sign that she was meant to climb Cross Mountain, against all odds. Miraculously, she had climbed to the fifth station – a feat she never thought she could accomplish – and made it safely back down. But with that first start, she had also opened her heart to many other starts – believing in the love, intercessory power, and Queenship of the Blessed Mother; offering forgiveness to those who had made her feel judged in the past; coming home to the Catholic Church; and recognizing that her desire to be “fed” at church was met, not through the words of a pastor, but through the Bread of Life who offers Himself to us at every Mass in the Eucharistic Feast.

To learn more, or to register for an upcoming Medjugorje pilgrimage and Father Sudac retreat, visit our Medjugorje page.