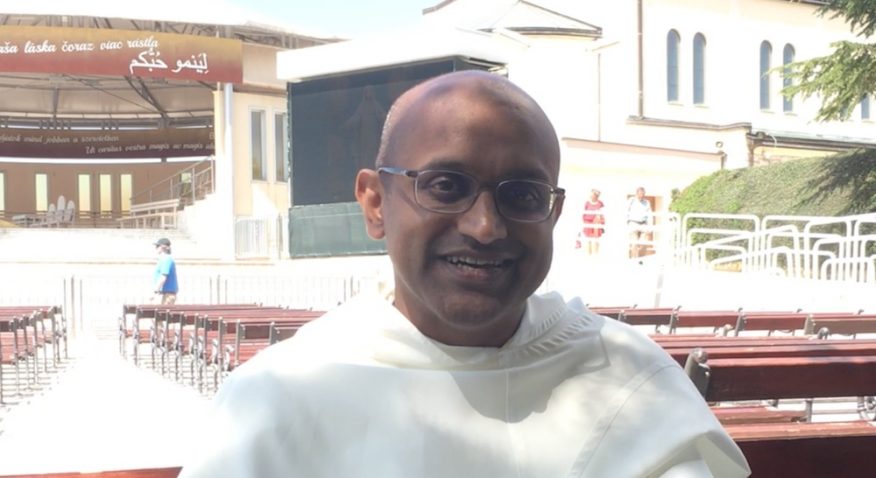 Recently, Fr. Leon Pereira, Chaplain to English Speaking Pilgrims in Medjugorje, spoke with Medjugorje pilgrimage leader Ann Vucic about the status of the Holy See’s approval of the Medjugorje apparitions, and whether the faithful are allowed to come to Medjugorje.

Fr. Leon’s words offered substantial food for thought regarding pilgrimage to Medjugorje. Over the next week, Tekton will offer two articles summarizing this conversation, beginning with an explanation of the current ruling on Medjugorje and scriptural support for the Vatican response.

“What is the status of Medjurgorje?” Fr. Leon started. “Unfortunately, we have to go all the way back to 1991. That was the last official thing that was said about Medjugorje, where the then-Yugoslav Bishops’ Conference met in the coastal town of Zadar, and they said that Medjugorje was non constat de supernaturalite – a Latin expression meaning it was not established as supernatural.”

Thus, the official ruling on Medjugorje at the present time is, essentially, that we need to wait and see. More evidence needs to be gathered, more investigations undertaken, before a final decision can be made.

SCRIPTURAL SUPPORT FOR THE CHURCH'S STANCE

“If Medjugorje is not from God, it will die out as Gamaliel says in the Acts of the Apostles,” Fr. Leon said, referring to Acts 5:33-40, when the Sanhedrin wanted to put the apostles to death. Gamaliel, a Pharisee and member of the Sanhedrin, argued that if the work the apostles were doing was not of God, it would fail. “But if it is from God, you will not be able to stop these men; you will only find yourselves fighting against God,” Gamaliel states in verse 39.

“And the church adopts that same attitude. If something is not from God, it will die out sooner or later. It can’t carry on forever,” Fr. Leon said.

Interestingly, in places like Lourdes and Fatima, the vast numbers of pilgrims actually contributed to the eventual approval of the apparition sites. “One of the things that was listed in the documents approving them as worthy of belief was the sheer number of people who came there,” Fr. Leon stated. “And so presumably the same is true of Medjugorje. The people coming here is part of the process of establishing whether something is actually going on here. Because if Medjugorje is not from God, it will die out.

“Now Medjugorje … that decision belongs to the Bishops Conference of Bosnia/Herzegovina, or failing that, the Holy See herself, but in the meantime, people are free to come here, to pray, to be converted, and to go home and testify what they experienced here. Good or bad.”

THE LIGHT FAR OUTWEIGHS THE SHADOWS

So, what is the good and the bad? Fr. Leon has seen both. Quoting Archbishop Hoser, who went to Medjugorje as Papal Envoy in the spring of 2017, and has now been assigned as Special Apostolic Visitor to the Parish of Medjugorje, he said, “'Medjugorje is full of light. It has some shadows. But the light far outweighs the shadows.'

“I myself have experienced what I call the little signs. People talk about the miracle of the sun, and rosaries turned into gold, or the intense smell of roses. I have experienced all three of these myself, but I don’t make a fuss about them, and I discourage people from latching onto these little signs as though they are an end in themselves. The big signs in Medjugorje are the sacraments – Confession and the Eucharist – because it’s all about Jesus. If we’re not here for Jesus, then we’re wasting our time.”

Regarding confession, Fr. Leon remarked on the number of people who return to the confessional after 20, 30, 40 and even 60 years away. In addition, he spoke of the vast number of priests and religious who attribute their vocations to Medjugorje, and the people who make dramatic commitments to change. Catholics divorced and remarried without the benefit of an annulment, for example, or those in same-sex relationships who “have come here and renounced their past life and set out to follow Jesus and to live according to his commandments, and to live fully reconciled with their God and Holy mother Church.”

Fr. Leon also pointed to the quality of adoration one finds in Medjugorje. “Adoration really is the heart of Medjugorje,” he said. “ I remember, there was an African priest sitting next to me during adoration, and there were 10,000 people kneeling outside and you could have heard a pin drop. He turned to me and said, ‘Now I believe something is going on in Medjugorje.’

“And I think actually that he’s right. There’s something going on here.”

In our next article, Fr. Leon addresses the questions, "Do we need Medjugorje for our faith?" and "What's the crux of the messages of Medjugorje?" as well as delving further into the question, "Can Catholics go to Medjugorje?"

Is the Vatican Paving the Way Toward Approval of Medjugorje?