When one finishes a leg of the Camino, after trekking through the beautiful landscape of Spain, the path comes to a close at the Cathedral of Santiago de Compostela. Having traced the footsteps of St. James, pilgrims from around the world finish their pilgrimage in this very church, where they offer up a Mass of thanksgiving for their safe journeys and the opportunities to be in communion with God and fellow Catholics.

This church, while nearly one thousand years old, has many features to admire, but perhaps the most interesting is found on the inside, and only makes appearances on special occasions. This spectacle is called the Botafumiero, and it is one of the largest thuribles in the world.

Thurible:  a metal censer suspended from chains, in which incense is burned during worship services 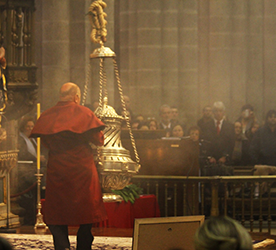 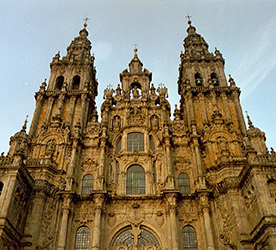 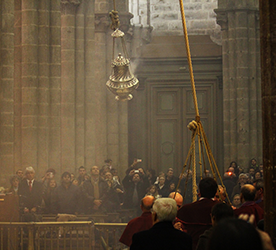 A BIG THURIBLE
Meaning “smoke expeller” in Galician, the Botafumiero it weighs a whopping 175 pounds and measures 5.5 feet tall. In order for it to be utilized, it takes 8 men (called “tiraboleiros”) to fill it with 90 pounds of charcoal and incense and tie it to a pulley system using elaborate knots. This pulley is located in the dome of the nave of the Cathedral, and was installed in 1604. Once the tiraboleiros feel they have safely and securely secured the Botafumiero, they give it a shove to start it swinging. They then continue to raise it higher and higher by pulling together on the rope of the pulley. When the large thurible is in full motion, it nearly touches the ceiling of the transept going at a speed of 68 meters per hour and reaching an ultimate height of 70 feet. This ritual lasts for about 80 seconds, allowing the thurible to swing by 17 times.

THE BEGINNING OF A TRADITION
This ritual began back in the 11th century. Weary and unwashed pilgrims would end their month-long excursions in the Cathedral, often smelly and sickly. The incense was thought to be cleansing in a time of plagues and epidemics, smelled nice, and was ultimately used as a form of prayer and offering. By the 13th century, the pulley system was updated so that the thurible could reach greater heights and span the entirety of the church. Many other cathedrals at this time also possessed and used large thuribles such as this one, but they are no longer in use.

Something as big and wild as the Botafumiero begs the question: “Has anything ever gone wrong?” Believe it or not, there is only been one reported accident. In 1499, Princess Catherine of Aragon paid a visit to Santiago de Compostela. During her time in the Cathedral, the Botafumiero was at the height of its swing when the knot holding it to the rope failed and the censer flew right through a high window and outside the church. Luckily, no one was injured.

To this day, pilgrims can witness the historical and magnificent “performance” of the (safely!) swinging Botafumiero in exchange for a donation of 450 euros.

Interested in walking the Camino? Create a group pilgrimage with us by clicking here!