It was a warm May afternoon, pleasantly sunny and warm. The 16th century architecture wrapped around the square, slowly swelling as 10,000 people earned their spot in the sprawling courtyard, woven around fountains and structures, corralled in by hardy trail markers. The general attitude of the growing crowd was gentle exciting, growing with each ticking minute. It was all about to begin.

Before long a joyful cheer starts to gain momentum, moving like wildfire until every person was involved. Banners and scarves wave through the air in tandem. The famous little white car had arrived, and standing upon it, a little man clad in white. He grew has he got closer and closer to each person among the crowd, bending over to greet and bless each child of God. The people loved the charismatic and fatherly gaze of Pope John Paul II.

After what seemed like only moments of cheering, greeting, and blessing, an alien noise pierced the atmosphere of St. Peter’s Square. Four noises. Before anyone could process what they had heard, Pope John Paul gently fell backward into the arms of an aid, calm and quiet. He had been shot three times. The white Fiat pealed out of the Square, the once jubilant crowd now covered in a sense of fear and dread, hands clasped in prayer for the safety of the beloved pontiff.

Sixty-four years earlier, another shocking event had taken place on this day.

In the countryside of Portugal in a small village, three shepherd children were gathered in a field, when before their eyes appeared a woman that they had never seen before. She was beautiful, unlike any beauty they had seen before. It was the Virgin Mary.

Over the span of four months, Mary would continue to appear before the children, often in front of an ever-growing crowd of onlookers hoping that they, too, would have a glimpse of the beautiful woman. Throughout the months, the children were given three different secrets – a vision of the terror of hell; the call for devotion to the Immaculate Heart of Mary to end the Great War, or else another would ensue; and the death of a pope. As miracles started to follow these apparitions, the devotion to our Lady of Fatima spread, along with her messages, and in 1946, the feast of our Lady of Fatima was established.

Sixty-four years after our Lady first appeared to the three children of Fatima, an injured yet still alive Pope John Paul II remembered the secret that had been proclaimed. He saw in the children’s retelling of the vision himself, and found his miraculous recovery a to be a direct intervention and gift of our Blessed Mother. When asked about the incident, he said “One hand pulled the trigger, another guided the bullet.” That bullet would later be given to our Lady when Pope John Paul II would make a pilgrimage to the shrine of Fatima and place the very bullet that pierced his flesh into the crown of Mary.

Tomorrow, we celebrate the feast of Our Lady of Fatima, who brings us the message of prayer and closeness to the Father in order to bring about joy in peace in the world. May we yearn to answer that call and truly live the love that we are created for. 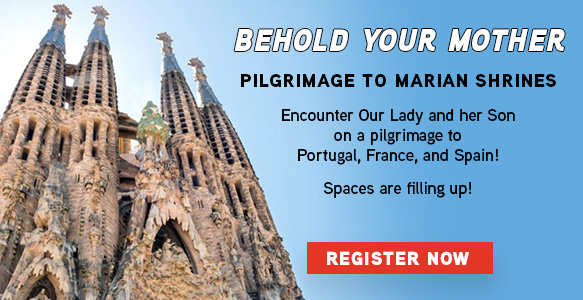