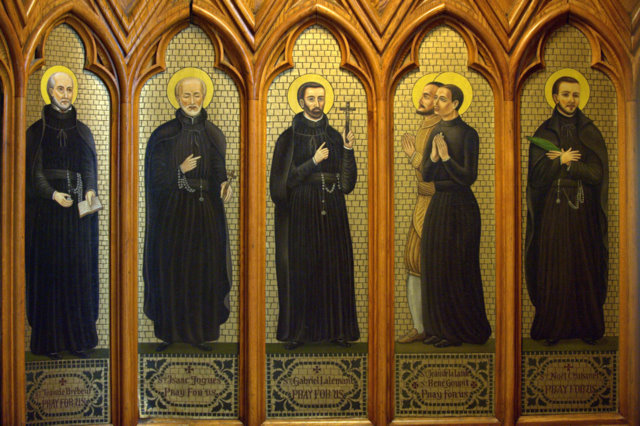 The Martyrs of North America

Let us pray,
Protect our land, O heavenly patrons, which you have bedewed with the rich treasure of your blood. Watch over our Catholic Faith which you helped to establish in this new land. Bring all our fellow citizens to a knowledge and love of the truth. Make us zealous in spreading abroad a knowledge of Catholic teachings, so that we may continue and perfect the work which you have begun with so much labor and suffering. Pray for our homes, our schools, our missions; for vocations, for the conversion of sinners, the return of those who have wandered from the fold, and the perseverance of all the faithful.
Amen.

Hundreds of years ago, missionaries did not have modern means of transportation as they went about evangelizing. They ministered to those they met along the way and often walked from settlement to settlement to preach and live the faith. Today, modern pilgrims have the opportunity to step back in time by making a walking pilgrimage through the same country baptized by the blood of the martyrs.

In the early 1700s, French Jesuit missionaries were sent to the “New World” to bring the faith to the native populations. The reception they found was less than receptive and many nations were hostile to the message of the Gospel. However, the Huron people, living in what is now Ontario, Canada, were more welcoming than most and were the first to receive the sacraments.

These Jesuit missionaries lived, prayed, worked, and ministered throughout New France (now Ontario, Quebec, and New York state) until sickness, famine, and war decimated the local populations until the remnant of Christians retreated together to the larger settlements in Quebec.

However, in the interim years, those who were to become the North American Martyrs valiantly lived out their faith, unswerving even unto death. Between the years 1642 and 1649, lay brothers and priests alike suffered the ultimate price for the glory of Heaven. The martyrdom sites and relics of Saint Rene Goupil, Saint Isaac Jogues, Saint Anthony Daniel, Saint John de Brebeuf, Saint Charles Garnier, Saint Noel Chabanel, and Saint Gabriel Lalemant can be visited and venerated in two different countries at the national shrines of the North American Martyrs in Auriesville, NY and Midland, ON, Canada.