A distant cousin of Jesus, John makes his first appearance in the Gospels when the angel Gabriel first announces his conception to Elizabeth and Zechariah, an aging couple who had previously been unable to bear children. Overcome with disbelief at the angel’s message, Zechariah voiced his skepticism and was instantly stricken with muteness, not recovering his voice until after the birth of his son. John’s second and more bodily appearance in the Gospels is during Mary’s visit to Elizabeth, where the infant John leapt inside his mother’s womb upon Elizabeth’s greeting to her cousin. This simple movement was a sure sign that Mary was truly a vessel for the Son of God.

Around 29-30 AD, John began his public ministry. He became a famous icon for his time, emerging from the desert wearing camel’s hair, proclaiming the imminence of God’s judgment, and preaching the need to repent and be baptized. He had followers that spanned across distant lands and gathered crowds across the province of Judaea and around the Jordan River. He was instrumental in helping Jesus begin his public ministry, baptizing him in the Jordan and being present for the appearance of the Holy Trinity: Jesus in the river, the Holy Spirit in the form of a dove flying overhead, and the heavens opening so the voice of God could proclaim, “You are my son, with you I am well pleased.” (Matthew 3:17) 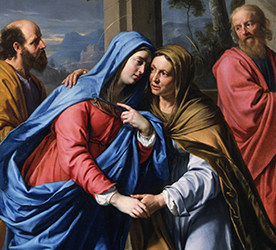 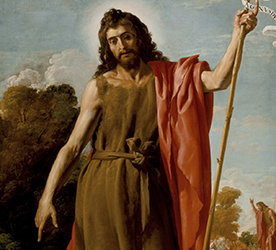 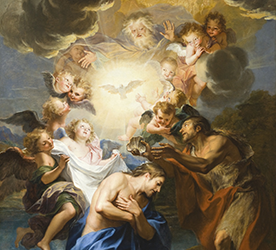 One of the trademarks of this beloved saint is the unusual way that he died. As he continued his preaching of repentance, he ruffled the feathers of King Herod, whose marriage to the divorced wife of his half-brother was publicly condemned by John. At the expressed wish of his wife Herodias's daughter, Herod had John bebeheaded. John’s willingness to serve the Lord and prepare the way for Christ made him an example for all Christians to follow, even for centuries after his death.

When the modern pilgrim journeys to the Holy Land, they can visit the sites where St. John the Baptist and his family once lived and worked. Ein Karem, meaning “Spring of the Vineyard” in Hebrew, is an ancient village in Jerusalem where John was born. It is currently home to 2,000 people, and receives over 3 million annual visitors, a third of which are from around the world. 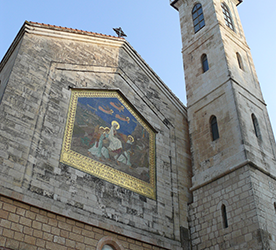 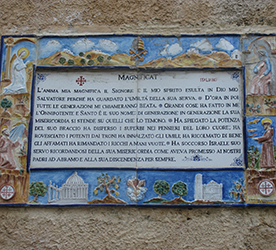 It was in Ein Karem that Mary went “into the hill country, to a city of Judah (Luke 1:39)” to visit Elizabeth. At this site today is the Church of the Visitation, also known as the Abbey Church of St. John in the Woods. This building is built against a rock declivity and is nestled amongst lush greenery. Its white brick, colorful mosaic, and well-kept grounds are welcoming for the pilgrims who daily enter it (appropriate that this church would lead people to come inside and encounter Christ). Within the church sits a well which Elizabeth and the infant John would have drank from and the rocky place where they hid during Herod’s Massacre of the Innocents, known as the “pietra del nascondimento,” the rock of concealment. Along the walls of the upper church are depicted different biblical events that celebrate Mary, as well as verses from the Magnificat which are painted upon its columns.

My soul proclaims the greatness of the Lord,
my spirit rejoices in God my Savior
for he has looked with favor on his lowly servant.
From this day all generations will call me blessed:
the Almighty has done great things for me,
and holy is his Name.

He has mercy on those who fear him
in every generation.
He has shown the strength of his arm,
he has scattered the proud in their conceit.

He has cast down the mighty from their thrones,
and has lifted up the lowly.
He has filled the hungry with good things,
and the rich he has sent away empty.

He has come to the help of his servant Israel
for he remembered his promise of mercy,
the promise he made to our fathers,
to Abraham and his children forever.

This church is a beautiful representation of the importance of John, his life, and his ministry in combination with the life of the Savior. He was the forerunner for Christ, preparing the way, and helping him to begin his public ministry through his baptism in the Jordan River. May we as a pilgrim people be able to take inspiration from John; to be forerunners for Christ with all we meet, preparing the way for Christ to enter more deeply into their hearts and lives.

Want to explore Ein Karem in person? Accompany us on one of our pilgrimages to the Holy Land, found here.