When I first walked through the doors of the Sagrada Familia, I entered as a study abroad art student, not a pilgrim. My breath was immediately taken away by the magnificent dancing colors of the grand windows and the columns that seemed to branch up into the sky for miles. As my eyes swept to all sides to take in more and more of the unfolding beauty, a fellow study abroad student to my right stated in the most unimpressed of voices, “It’s sorta ugly, isn’t it?” 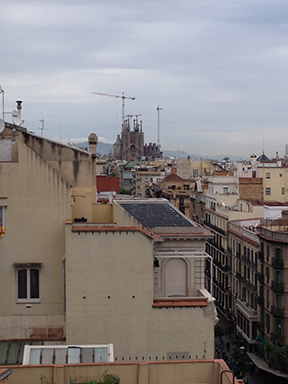 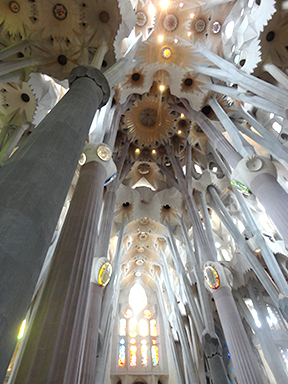 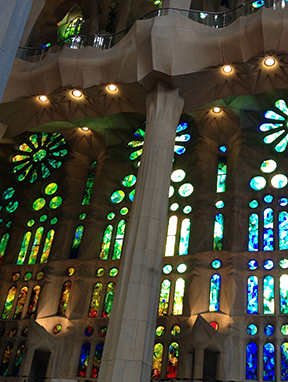 Something Old, Something New
In that moment my heart sank and I felt as offended as if I myself had been the one who sculpted that Basilica from the ground up. Being the only Catholic out of thirteen students on this trip meant that I faced little persecutions on my faith here and there, but I was genuinely saddened to see something so beautifully symbolic of my faith fall on blind eyes. How could something that nearly moved me to tears appear so lackluster to the person who stood beside me?

In a way, I get it. The Sagrada Familia isn’t your typical “traditional” Catholic Church. It’s not what you would expect to see of a church whose construction began over 100 years ago in 1882, which can be a bit of a shock if you’re not expecting it. But that’s what makes it so great: it has this power to capture the attention of everyone within several miles of it and delivers new tastes of the mysteries of the Catholic Church, which is inspirational for non-believers and refreshing for cradle-Catholics.  Antoni Gaudí, the main architect (and a devout Catholic himself), turned all Neo-gothic tradition on its head when he commenced the creation of this innovatively designed and nature-inspired masterpiece.

Now, something that takes 100 years to create and is teeming with rich symbolism and Tradition can’t possibly be described adequately in a single blog post. For now I’ll feed you the very beginnings, but stay tuned next week for the meat and potatoes, where I’ll tackle the task of describing the ornate and intricate exterior.

From the Ground Up
In 1874, The Spiritual Association of Devotees of St. Joseph in Barcelona assembled and campaigned for funds to construct a church that was dedicated to the Holy Family. An outpouring of approval and donations made this desire a reality, and the first stone was laid on March 19th, 1882, St. Joseph’s feast day. The crypt below the apse was the first section to be started under architect Francisco de Paula del Villar y Lozano. About a year later, Gaudí took over as head architect. He immediately got started on the first of three facades and created provisional school buildings for children of workers and the city. By 1925, the first bell tower was finished and dedicated to St. Barnabas. These would be the only pieces of his work that Gaudí would see to the end, as he was injured in a tram accident that led to his death. He was buried in the very crypt that he helped construct, and remains there to this day. Ever since then, this massive project has been undergoing construction and re-construction based on Gaudí’s original plans, and will continue to do so, for perhaps another 10 years until its estimated completion.

Beholding the Beautiful
Don’t be fooled by my classmate’s impression of the Basilica being “ugly.” When seen through open eyes and an open heart, the Sagrada Familia truly is a connection between heaven and earth – a connection we’ll more fully explore next week. Stay tuned!