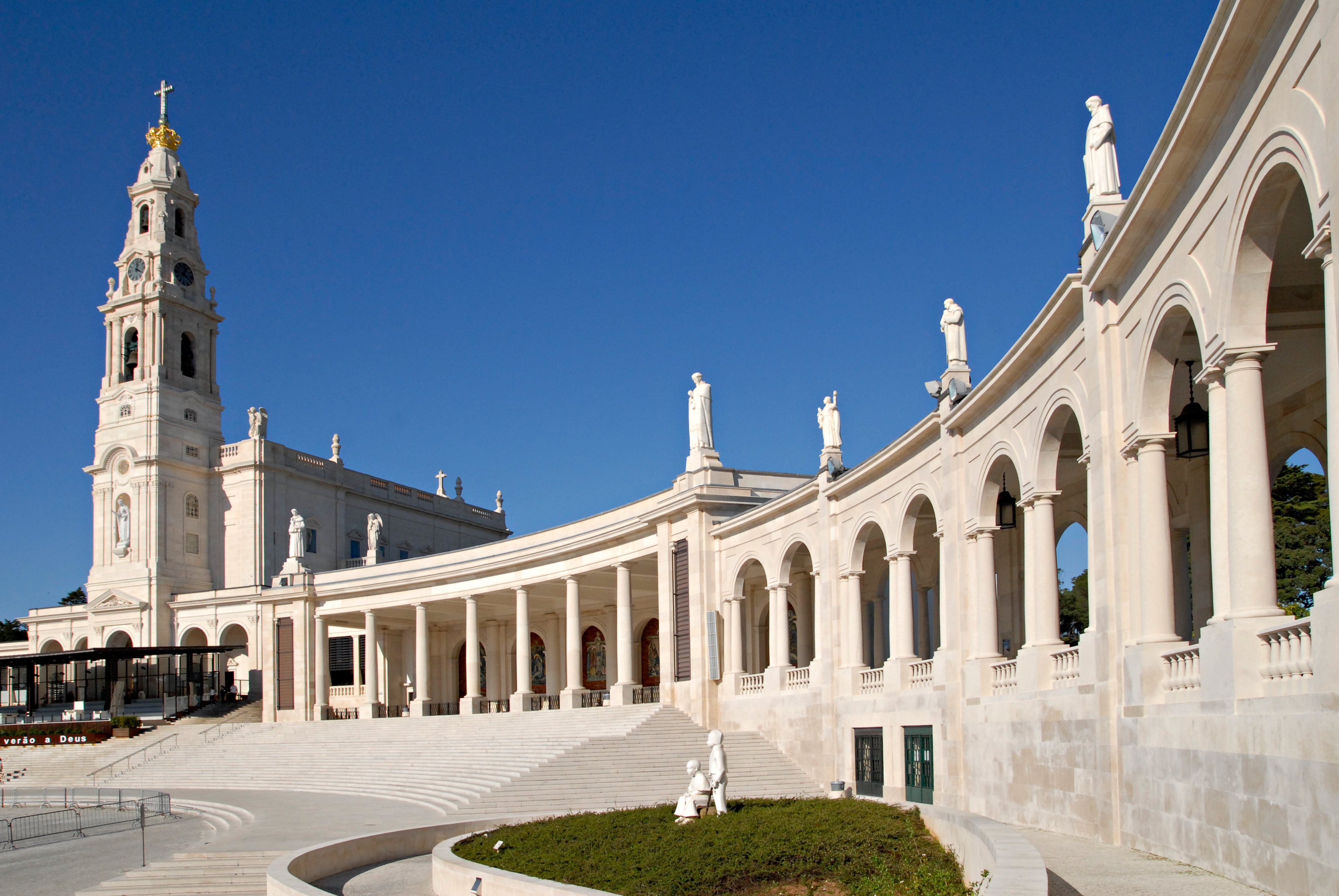 Thousands of people travel to Fatima each year. During this, the 100th anniversary year, this number is expected to increase. Tekton Ministries has been coordinating pilgrimages to this venerated site for over 20 years.

Some pilgrims have shared their experiences via video interviews, survey responses, Facebook posts, or written reflections. Below are some collected from pilgrims who travelled to Fatima on a pilgrimage through Tekton Ministries in 2016.

The Lord touches each of us in a unique and personal way. People may be in the same place at the same time, but experience things differently.

For Father Jegan Peter, Fatima was one of his highlights from his 2016 pilgrimage along the Camino de Santiago and Fatima.

Fatima is the highlight of that trip, I would say. I was so taken up, how 3 shepherd kids experienced the powerful message through the Blessed Virgin Mary, our Mother. A great message not only to them, but a message to the whole world. And how they carried that message. How amazing these three kids made all things for the glory of God. I really learned many things. 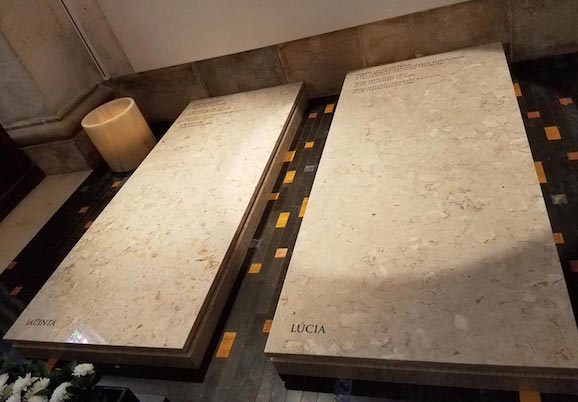 The graves of the newly canonized Saint Jacinta Marto and her cousin, the Servant of God Lucia dos Santos.
Photo provided by Frances Cifuni.

Father Jegan experienced many personal graces while in Fatima.

I had a chance to celebrate Mass there at the chapel of the Holy Family, near to the Apparition Chapel. Our Mother appeared there, so I felt very unworthy to stand there. But God gave me that chance.

And God gave me another chance to be His humble servant. I also had the chance to pray Rosary in my native language – Tamil.

Another pilgrim from his group, Barbara DeGortari, recognized how special this was for him, and how this grace extended to the other pilgrims in their group as well:

Father Jegan was chosen to lead the rosary prayers for 5 decades in his native language of Tamil. That was an unexpected thrill for him. It made the final climax of our trip just extra special. 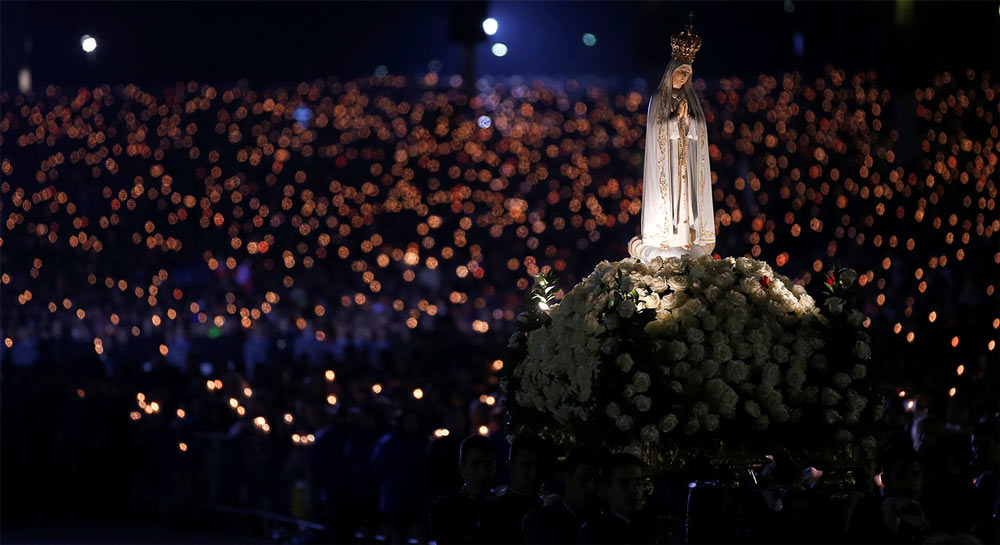 We arrived to Fatima the very same day in which we had attended Mass at the Basilica of Santiago. The bus dropped us off at our hotel by the shrine close to sunset. After dinner we walked over to the main plaza with our candles to participate in the nightly recitation of the rosary and the procession. After a short time, hundreds of people began to gather around the outside chapel area, the place of the first apparition of Mary on May 13, 1917. Glancing over the crowd, one could not help but notice the international flavor of the pilgrims in attendance. Once the recitation of the rosary began, we were very inspired as we listened to all the different languages filling the space around us. The people from so many different parts of the world had come to Fatima with the same faith, creed and hope for the future, and all reciting the same prayers in different tongues!

Though Mary appeared only to the three children, her message was for the world. Barbara noticed that while praying with hundreds and remarked that the grace extended beyond just those three shepherds.

Through this Apparition of Mary millions of Christians have not only learned the value of reciting the rosary to pray for world peace, but also have received God’s grace for hope in the future.

Deacon Mike Braun went to Fatima and the Marian shrines with an open heart – ready to receive the grace of God and hoping to grow in deeper devotion to His Mother. Though the rosary procession also deeply impacted him, the witness of the faith on hundreds of pilgrims was also very inspiring:

I hadn’t really had a particular devotion to the Blessed Mother to be honest. I read some material beforehand on the plane and in the bus so that I would be prepared and would know what to look for and it just really helped me to grow in my understanding of Mary and in my Marian spirituality. The whole experience at Fatima – to see people walking on their knees, that long path down to the shrine, praying the rosary – what a beautiful witness. And then praying those rosaries in procession every night with people from all over the world one can’t help but grow in love for Mary and the Marian spirituality.

In addition to the chapel of the apparitions and the large plaza where the rosary is recited and the procession occurs, the environs of Fatima contain many other structures marking the holy sites. There are statues and chapels where the angel and Mary appeared to the children, and graves where the Saints Jacinta and Francisco Marto and their cousin, Servant of God Lucia dos Santos, were laid to rest. There are also two basilicas – the Basilica of Our Lady of the Rosary of Fatima, dedicated in 1953, and the Basilica of the Most Holy Trinity, dedicated in 2007.

Deacon Mike Braun spoke of the beauty of this new basilica:

We enjoyed Fatima very much, spending a couple of days there, celebrating Mass in some special sites. The new basilica there is beautiful. There’s a big mosaic across the back behind the altar that is just remarkable. Beautiful to see. Showing the community of saints around the cross, all surrounding Christ. It was just a beautiful scene.

The apparitions at Fatima occurred only 100 years ago. Sister Lucia, the longest-living visionary, passed away only 12 years ago. Therefore, there are family members of the visionaries still alive and living in the area. Both of the October 2016 pilgrimage groups Tekton Ministries sent to Fatima had the opportunity to meet one of these family members. 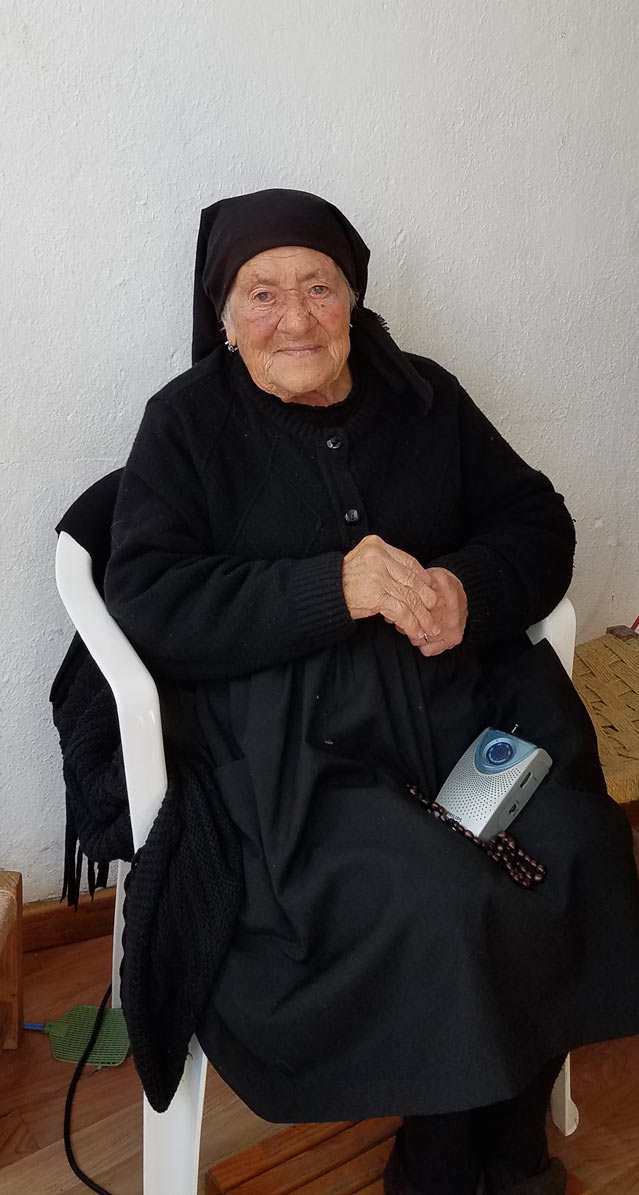 We were able to go and visit the houses of the children to whom the Virgin appeared. We visited first the house of the brother and the sister and then we went to the house of the cousin. Across the street from the house of Lucia, we found out that one of her nieces is still alive, is a nun, and is 96 years old. When she saw Father come in where she was in an atrium, she got hold of his hand and she kissed it because she saw that he was a priest. So, it was a very special moment.

His wife, Barbara continued, noting it was once again a grace special for one that extended to many:

It wasn’t just Father’s special moment: it belonged to all of us, because when she saw we were together, she motioned for us all to come in. We had our picture taken with her and she was just delighted to share the joy, too. She was a sweet little lady.

Father Jegan also noted how there were many individual graces for the pilgrims in his group. As a priest, it was very special for him to see how everyone was touched by the graces of God:

So many things happened in Fatima for our group members. They did experience a great spiritual encouragement. They were so much moved by the spiritual experience of those in prayer. It was so touching, when we saw someone kneeling and walking for a long distance to the basilica. That was very encouraging and it was a way to take the pain and suffering and offer it to Mother Mary. I would strongly recommend to have Fatima as part of a pilgrimage in the future. 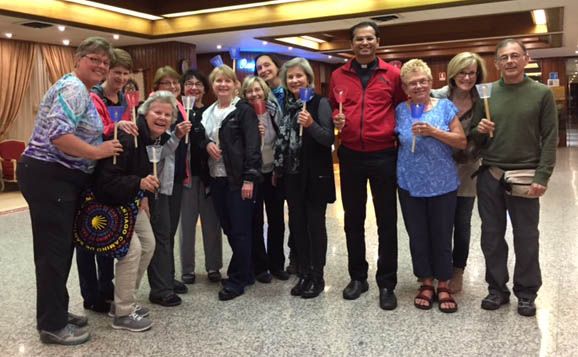 Father Jegan Peter and his group of pilgrims at their hotel in Fatima before participating in the candlelight procession.
Photo provided by Barbara de Gortari.

For more information about the 100th anniversary of the apparitions at Fatima, see our blog.

To see upcoming pilgrimages to Fatima, please visit our website.