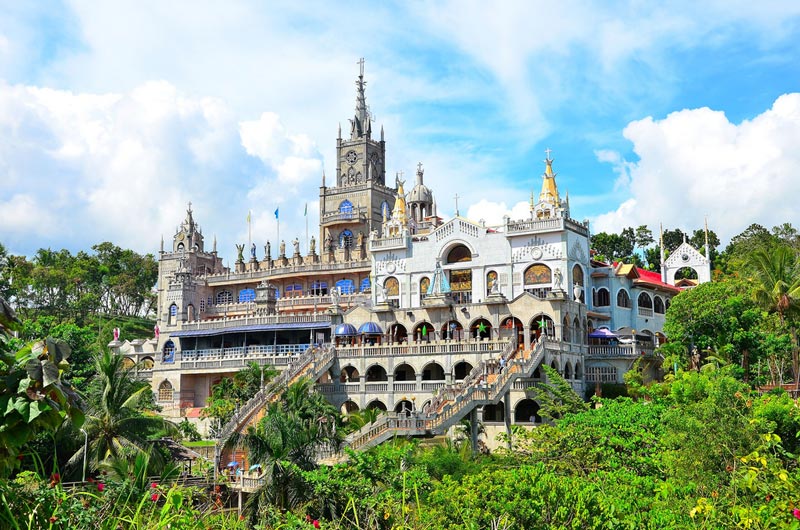 Pilgrimage to the Philippines for the 51st International Eucharistic Congress, 2016

Sadly for Tekton Ministries and for Filipino Catholics in the United States, we have not yet found a priest who is interested in leading a pilgrimage to the Philippines for the International Eucharistic Congress being held there in January of 2016 but for those who might be making the pilgrimage without a priest, we thought we’d help you out by giving you a rundown of holy sites to visit.

Shrine of Our Lady of Manaoag

One of the pilgrimage sites with a large following among Catholic spiritual pilgrims is the Shrine of Our Lady of Manaoag in Pangasinan. Miracles answered by prayers to the Lady of Manaoag are depicted in the murals on the church exterior, contributing to the fervor of many devotees.

The church is one of the Philippines’ most widely visited Catholic Pilgrimage sites. It is located 200 kilometers north of Manila, the countries capital.

Basilica Minore of the Our Lady of Piat

Piat is a municipality in the province of Cagayan in Northern Luzon. One of the world’s shrines to the Virgin Mary is the Basilica Minore of the Our Lady of Piat in Cagayan. It is another well-frequented spiritual pilgrimage venue. The image of Our Lady of Piat, a brown Madonna image, was made in Macau and was believed to be patterned after Mexico’s Guadalupe. Ailments are believed to be healed at this shrine, even by the nuns who sell the miraculous oil that pilgrims can take home after their journey. It is the first basilica minore in its region.

Quiapo Church in the City of Manila is one of the most visited churches in the archipelago. Hundred thousands of devotees go to the church during the month of January, Feast of Nazarene. The church is officially known as Minor Basilica of the Black Nazarene.

The Santo Niño de Cebu is a popular Holy Pilgrimage site in the city of Cebu in the province of Cebu in the Visayas. It is called Holy Child of Cebu. The figure of the Child Jesus is highly similar to the Infant Jesus of Prague is clothed in expensive textile robes mostly donations from fervent devotees in the Philippines and abroad.

The statue is the oldest Catholic relic in the Philippines and permanently housed since 1565 at the Basilica Minore del Santo in Cebu City.

The Santo Niño was given by Magellan to the chieftain of Cebu, Rajah Humabon (Carlos), and Hara Amihan (Juana) in 1521.

Antipolo Cathedral is a Holy Pilgrimage site in the Philippines in the city of Antipolo. Antipolo city, the capital of Rizal province, is located about 25 kilometers east of Manila.

Our Lady of Peñafrancia

The “Our Lady of Penafrancia” in the city of Naga in Bicol region is a well visited Holy Pilgrimage site in the Philippines. Tens of thousands of pilgrims, devotees, tourists go to city every September for nine-day festivities in honor of Our Lady of Peñafrancia, the Patroness of Bicol.

The Peñafrancia Basilica Minore is Naga City is where the Our Lady of Peñafrancia is enshrined.

National Shrine of Our Lady of Fatima

Our Lady of the Pillar

Our Lady of Lourdes

A replica of the grotto of Our Lady of Lourdes in San Carlos Seminary, Guadalupe Viejo, Makati City

Our Lady of Lourdes is the name used to refer to the Marian apparition that appeared before various individuals in separate occasions around Lourdes, France.

The apparitions of Our Lady of Lourdes began on 11 February 1858, when Saint Bernadette Soubirous, a 14-year-old peasant girl from Lourdes, admitted, when questioned by her mother, that she had seen a “lady” in the cave of Massabielle, about a mile from the town, while she was gathering firewood with her sister and a friend. Similar appearances of the “lady” took place on seventeen further occasions that year.

One of the most popular cathedrals in the Philippines is the Manila Metropolitan Cathedral-Basilica which is also known as the Cathedral-Basilica of the Immaculate Conception and informally as Manila Cathedral. This is the cathedral church of the Roman Catholic Archdiocese of Manila and is located in Intramuros.

The cathedral is dedicated to the Patroness of the Philippines, Blessed Virgin Mary under the title Our Lady of the Immaculate Conception.

Our Lady of Caysasay

Another pilgrimage and holy site in the Philippines is the Our Lady of Caysasay. Its Spanish name is Nuestra Señora de Caysasay. It is a celebrated 17th-century image of the Immaculate Conception dated 1603.

The image was found by a man named Juan Maningcad while casting his net in nearby Pansipit River. The image is about six inches high and the feast day of Our Lady of Caysasay is December 8.

Baclaran Curch along Roxas Boulevard is one of the most popular pilgrimage and holy sites in the Philippines. The National Shrine of Our Mother of Perpetual Help which is also called the Redemptorist Church is more popularly known as the Baclaran Church. It is one of the largest churches in the country and houses one of the most venerated Marian images in the country, an icon of Our Mother of Perpetual Help, to which miraculous powers are ascribed. Religious devotees flock to the sanctuary every Wednesday in what has become known as “Baclaran Day”, and participate in a novena offered for the Virgin’s intercession. The shrine celebrates its annual feast day on June 27.

The building has a seating capacity of 2,000, but as many as 11,000 people can be inside during Masses. An estimated 120,000 devotees are currently affiliated with the shrine.

The Shrine of Mary, Queen of Peace, Our Lady of EDSA, or more popularly, the EDSA Shrine is a small church of the Catholic Archdiocese of Manila located at the intersection of Ortigas Avenue and EDSA in Quezon City. The shrine, built in 1989 originally to commemorate the memories of the People Power Revolution and its peaceful outcome. It is officially called the “Shrine of Mary, Queen of Peace” or “Our Lady of Peace Quasi-Parish”, although these names are seldom used.

Malolos Cathedral, also known as the Basilica Minore dela Nuestra Señora de Inmaculada Concepcion or Minor Basilica of Our Lady of Immaculate Conception is the ecclesiastical seat of the Diocese of Malolos in the Philippines. It is another holy pilgrimage site in the Philippines.

Paoay Church, which is also known as the St. Augustine Church in Paoay, is a historical church located in Paoay, Ilocos Norte. This UNESCO World Heritage Site is one of the Holy Pilgrimage sites in the country. The construction of this very old church began in 1694 and was completed after 200 years in 1894.