R R / Last Updated: January 5th, 2021
“…with Christ Jesus himself as the capstone.”
Capstones are different from keystones, a fact I recently learned.  A keystone is used at the apex of a structure to hold it together, as seen below:

A capstone is used atop a structure to decorate and/or protect it from the elements.  The difference can be seen below: 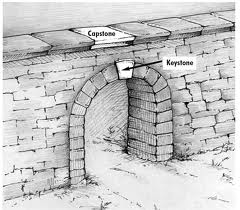 St. Paul refers to Jesus in today’s reading as the capstone.  He is at the head.  He is there to protect the structure below, the “household of God,” the ” temple sacred in the Lord,” the “dwelling place of God in the Spirit.”  A problem exists, however, in Paul’s use of a capstone as a metaphor.  We hear “Through him the whole structure is held together.”  If the English translation is correct, that would actually be describing a keystone.
But enough about keystones, capstones and even, as he is described elsewhere, cornerstones.  Well, humor me a little longer actually.  Below is a picture of the Gateway Arch in St. Louis in its closing weeks. Notice that a keystone would soon be needed by which the “whole structure is held together”. 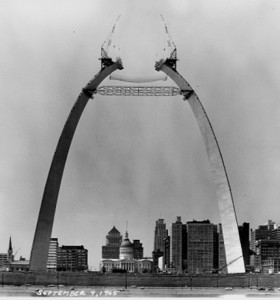 That day would come on October 28, 1965.  As you can see in the picture below, the keystone was gently placed between the north and south legs on a bright, sunny St. Louis fall day.  There was a problem, however. 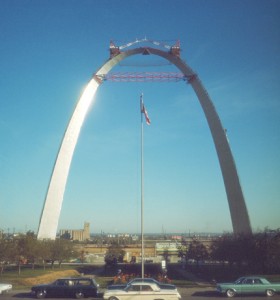 Bright sun on stainless steel causes expansion.  There was already going to be immense pressure on the “keystone”.  In fact, according to the arch’s website, “over 500 tons of pressure was used to jack the north and south legs of the Arch apart for the last four-foot piece to be placed at the top.” (gatewayarch.com) It would not be such a gentle process. The thermal expansion didn’t help matters.

This 4′ wide section (not very long at all) would be the last of 142 sections.  And the most important one; precisely because through it, “whole structure is held together”.  With the sun causing expansion, however, the two legs were not going to be perfectly aligned, which would cause serious structural problems that would prevent the arch from being completed.  Below is a description of the intricacy and simplicity of the problem and solution- quite interesting actually.

The base of each leg at ground level had an engineering tolerance of one-64th of an inch (0.40 mm) or the two legs would not meet at the top. During construction, both legs were built simultaneously. When the time came to connect the legs at the apex, thermal expansion of the sunward-facing south leg prevented it from aligning precisely with the north leg. The St. Louis Fire Department sprayed the south leg with water from firehoses, cooling it until it aligned with the north leg. (worldhistoryproject.org)

Where am I going with this reflection?  St. Thomas, whose feast we celebrate today, is known as “doubting Thomas”.  It’s not a great way to go down in history.  He is chided by Jesus before all the other Apostles for his lack of faith.  (St. Peter could relate.)  And yet he is an important member of the household of God, so much so that we celebrate him with an annual feast day.
Maybe we can relate.  St. Paul says to the Ephesians, “you also are being built together into a dwelling place of God in the Spirit”.  He does not say, “you have been built”.  He says, “you…are being built”.  And not just one of us but “together” into a dwelling place of God.
Discipleship can have many unexpected and unforeseen problems, just as we saw in the building of the Arch.  These can be very complicated and intricate, delicate problems.  Yet Jesus Christ, often through the humblest means (St. Louis Fire Department, rather than the world’s most learned architects) can provide simple solutions.  It may take hard work (500 tons pressure) to accomplish the simple solution, but Jesus allows for himself to be the capstone (really keystone) that absorbs the pressure so that the other parts of the structure (the legs, or we ourselves) can experience the freedom the pressure that comes by “being built together into a dwelling place of God in the Spirit.”