It’s a long-running joke in my family to respond to a question of how to get somewhere with “Oh, you can’t get there from here. You have to go somewhere else to start.”  It seems like an odd comment – and not very helpful – but in the pilgrimage world, it is not uncommon to internalize this belief. That a pilgrimage is only a pilgrimage if it begins in a certain place.

Nowhere is this more apparent than on the Camino de Santiago.  St. James the Greater, whose feast day we celebrate July 25th, is buried in the city of Santiago de Compostela, in the northwest corner of Spain. Pilgrims have walked (or ridden, or driven, or otherwise traveled) to venerate this Apostle since the 10th century, when the tombs of James and 2 companions were discovered.  Visit any discussion board or online group chat about the Camino and there will be various arguments about the “right” way to pilgrimage and the “true” path to get there.  Many insist “the Camino” is the route from St. Jean Pied-du-Port in France, over the Pyrenees Mountains, across the Meseta, and into Santiago.

I used to think this myself, because the French Way was the only way I had heard of.  And to walk 500 miles seemed a great feat, so that was considered the “whole thing.”  Even though the pilgrim’s office in Santiago requires one to walk only the last 100 kilometers (a little over 60 miles), it seemed more adventurous and more real to walk over five times that.

While this is the most popular route (55% of pilgrims who claimed a certificate of completion in 2019 walked the French Way), and the most famous (more books are written about this route than any other, and it is the one Martin Sheen walked in the movie “The Way”) it is far from the only route.

I first became aware of the variety of routes when I lived in Frankfurt, Germany, as my parish church there had a pilgrim statue out front with the scallop shell around his neck.  I was told this meant the church was a stop for pilgrims in the middle ages along their way to Santiago.  Over the years, I learned that most early pilgrims would basically leave their homes, go to their parish priest for his blessing on their journey and then make their way from church to church until they reached their destination. There is no need to go somewhere else to start a pilgrimage.  The pilgrimage begins once you leave your home – no matter where that is or which path you take from there.

In 2013, I had the opportunity to travel with a parish group along the Camino Inglés – the shortest of the land routes to Santiago.  Named after the mostly English-speaking pilgrims who would land in the port city of Ferrol from their homes in Ireland and England, this route – which I had not heard of at the time – winds its way south to Santiago from near where the Bay of Biscay meets the Atlantic Ocean.

The following winter was exceptionally cold – known as the “Polar Vortex” throughout much of the Midwest.  It seemed to be the longest and coldest winter I had ever experienced, and a great part of me longed to be back in Spain with the warmth and lack of snow.  Working as a nanny at the time, I researched all about the Camino most days during the baby’s naptime. Dreaming about a longer Camino one day, I tentatively planned what I would do “one day.”

As a California girl living in Indiana, I was especially drawn to the Camino del Norte, which traverses the Northern coast of Spain, and the Primitivo, which meanders through the mountainous region known as the Picos de Europa after splitting with the Norte near the city of Oviedo. After many unplanned and completely unpredictable occurrences, I found myself walking that exact route in October/November of 2014.  Starting in Hendaye, France on October 1, I reached Santiago de Compostela on November 2 – the Feast of All Souls!

Both of my Caminos hold deep spiritual meaning for me – in very different ways. They each offered numerous graces to me – both during the pilgrimages themselves as well as long after I returned.  The main commonality is the Lord called me on both and was with me through it all.

And that is a lesson I am continuing to learn.  By being exposed to the many Caminos across Spain, I came to the realization that it is merely a parallel to our spiritual lives in general.  The Lord created us to be unique and unrepeatable, so our spiritual journeys with Him will also be unique.

Just like there is no one “right way” across Spain to Santiago, and you don’t need to go somewhere specific to start your pilgrimage journey, the only “true” way through life is to follow Him who is “the Way, the Truth, and the Life”.  I don’t need to go somewhere special or do something specific to start following Him.  If I allow myself to listen to the Holy Spirit, I will always know the Way. 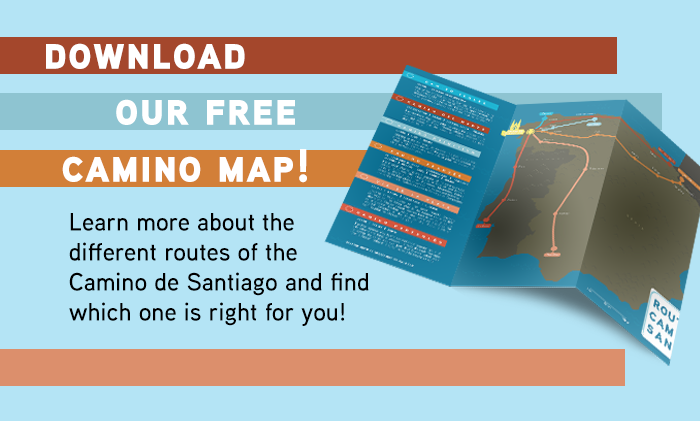 Enjoy our newest downloadable – a map with the 6 main routes across Spain and brief descriptions of each. Use it to help plan your Camino!