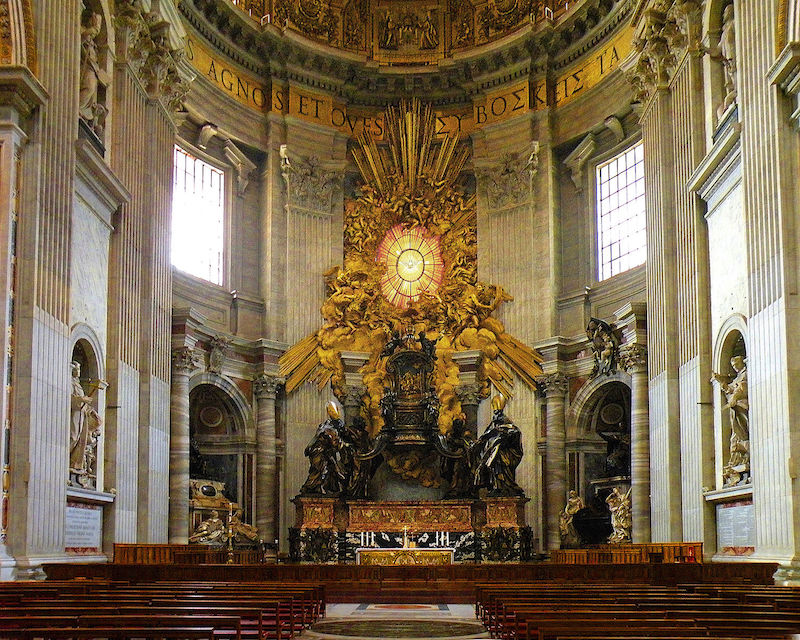 In the middle of St. Peter’s Basilica, the gilt bronze casting designed by Gian Lorenzo Bernini encloses the wooden relic proposed to be the actual chair upon which Peter sat when he was Bishop of Rome. Enclosed for preservation in the 17th century, the Catholic Encyclopedia describes the wooden chair inside as:

“…a perfectly plain oaken arm-chair with four legs connected by cross-bars. The wood is much worm-eaten, and pieces have been cut from various spots at different times, evidently for relics. To the right and left of the seat four strong iron rings, intended for carrying-poles, are set into the legs.”

The feast of the Chair of Saint Peter is on February 22nd. On this feast, do we really celebrate a piece of furniture?

This feast actually commemorates the office of the bishop of Rome and the fact that Jesus Christ chose Peter to “sit” in his place as the visible head of the Church on earth. As Pope Benedict XVI said, it is a day when “we give thanks to God for the mission He entrusted to the Apostle Peter and his Successors” (General Audience, Feb 22, 2006)

In the 16th chapter of Matthew, Jesus asks His disciples who they think He is. This is when Peter makes his “confession” about Jesus and claims Him as Messiah. Jesus responds:

“Blessed are you, Simon son of Jonah. For flesh and blood has not revealed this to you, but my heavenly Father. And so I say to you, you are Peter, and upon this rock I will build my church, and the gates of the netherworld shall not prevail against it. I will give you the keys to the kingdom of heaven. Whatever you bind on earth shall be bound in heaven; and whatever you loose on earth shall be loosed in heaven.”
– Mt 16:17-20

Jesus promised that His truth would continue even after His ascension. Peter and his successors are the “keeper of the keys” and are charged with maintaining the whole Truth of the Catholic Church. Occasionally, the Pope will speak out and make a definitive statement about this Truth. When he does so, acting in the full authority of his role as Pope, he is said to do so “ex cathedra” (Latin “from the chair”). He speaks figuratively “from the chair” of St. Peter – acting in the role of St. Peter.

Saints throughout the centuries have venerated this role of Pope and as faithful Catholics, we trust our Lord and his great plan for our salvation when we do so as well. In the 4th century, St Jerome wrote to Pope Damasus:
“I decided to consult the Chair of Peter, where that faith is found exalted by the lips of an Apostle; I now come to ask for nourishment for my soul there, where once I received the garment of Christ. I follow no leader save Christ, so I enter into communion with your beatitude, that is, with the Chair of Peter, for this I know is the rock upon which the Church is built” (cf. Le lettere I, 15, 1-2).

Today, thousands of pilgrims visit the Chair of Saint Peter which is located in the St. Peter’s Basilica in the Vatican. Have you ever thought about visiting the holy sites at the Vatican?