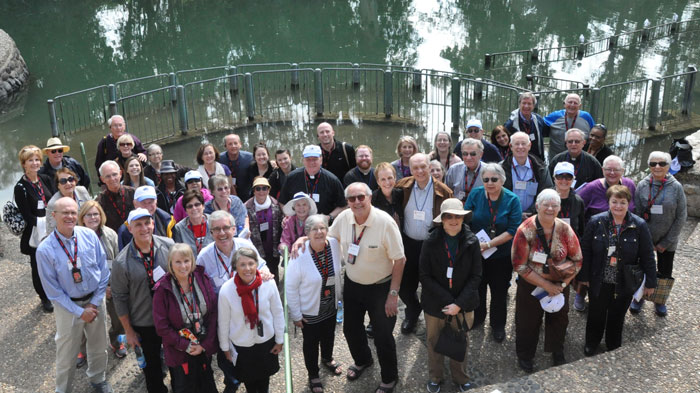 Archbishop Joseph W. Tobin is leading an archdiocesan pilgrimage from Indianapolis to the Holy Land from February 4-15, 2015 with Tekton Ministries.  Traveling with a large group of pilgrims is Natalie Hoefer of the archdiocesan staff.  Tekton always encourages its pilgrims to share photos and reflections with us.  Natalie, like Corey Bruns, a seminarian who recently traveled on a seminarian pilgrimage with Tekton, has gone above and beyond.  Through a blog established specifically for the purpose of sharing what Archbishop Tobin and others are experiencing on their holy land pilgrimage, Natalie is communicating to readers, firsthand, what it’s like to be praying, walking, eating, sleeping and living, even if just for a short time, in the land of Jesus.

Here is a sample post from the blog being written on behalf of the Archdiocese of Indianapolis. 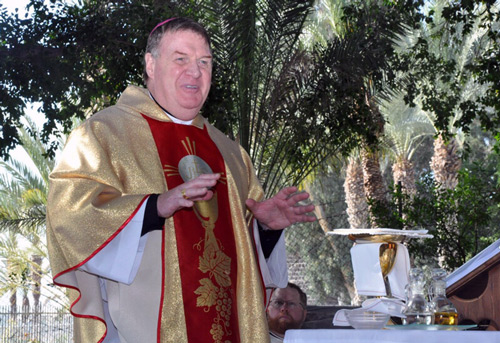 (By Natalie Hoefer) SEA OF GALILEE— There were so many unusual and impactful elements to the outdoor Mass that Archbishop Joseph W. Tobin celebrated in Bethsaida: the canopy of lush green limbs arcing over the altar; the twittering of birds, the gentle breeze coming off of the Sea of Galilee behind the archbishop.

But most meaningful was the location—an area near Bethsaida believed to be where Christ established Peter’s primacy, as relayed in John 21:15-19.

“Celebrating the Eucharist with the folks was the highlight [of the day for me],” said Archbishop Tobin. “It was such a beautiful day with a lovely breeze. I was very conscious we were celebrating Mass near where Jesus established the primacy of Peter. I took a good look at that beach and thought of Peter jumping in the water because he couldn’t wait [to get to Jesus on the shore].”

Most of the sites visited by the pilgrims today revolved around the Sea of Galilee, where Jesus focused a good portion of his ministry.

“The sea was there [during Christ’s time on Earth],” said Mary Dougherty of Immaculate Heart of Mary Parish in Indianapolis. “So you know that’s a place where Jesus was.”

The day started with a boat ride on the Sea of Galilee, also called Lake Tiberius, followed by a stop at the Mount of Beatitudes on 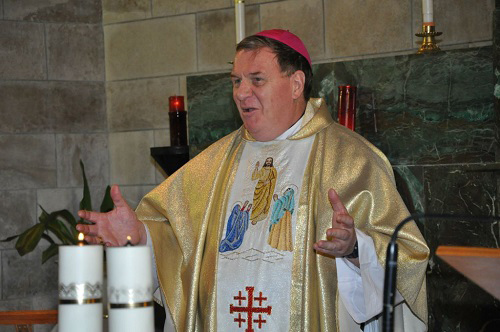 the northern shore of the sea. The area is believed to be the hillside upon which Christ delivered the Sermon on the Mount.

“Mahatma Gandhi said he thought the finest program for human living that he’d ever found were the Beatitudes,” the archbishop said in his homily near the rock of Peter’s primacy.

With a few boats sailing in the distance on the Sea of Galilee behind him, Archbishop Tobin also spoke during the homily of the symbol of boats in terms of Catholicism.

“The boat is a symbol of the Church,” he said. “And here, where we celebrate the primacy of Peter, I don’t think we should begin with Peter himself. We have to begin with the Church, because whatever the Lord said to Peter, and whatever authority he gave Peter, it was for the service of the Church, that fragile [boat] which wanders over life’s tempestuous sea.”

Referring to the next stop on thepilgrimage—Tabgha, believed to be the site of the miracle of the multiplication of the loaves and the fishes—Archbishop Tobin connected the site of Peter’s primacy with the miracle.

“What is the miracle that is told the most times in the Gospel?” he asked. “The loaves and the fishes. It gives me great hope, because Jesus points out the mission to his disciples, to us. 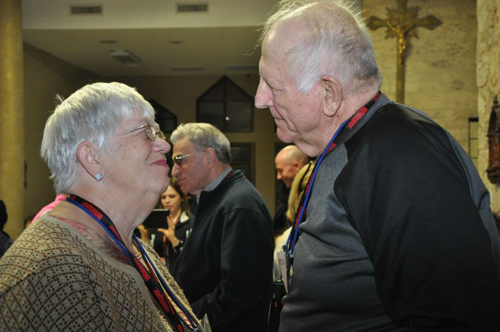 “He doesn’t say, ‘Whatchya got?’ or ‘What do you feel like doing?’ He says, ‘Give them something to eat.’ … They say they only have five loaves and two fishes. And that was enough. The little they had was enough. And they gave it all. The Lord says to give what you have. Peter said, ‘Lord, you know everything. I give you what I have—I love you.’ And Jesus said, ‘That’s enough. I can do the rest.’ “

Mary’s husband, Larry Dougherty, cited the visit to the rock of Peter’s primacy as the highlight of his day.

“When you looked in that church, you saw that big rock. Someone asked me, ‘Could that be the rock where Jesus spread out the food and cooked it over a fire so they could eat it?’ I said, ‘Well, there probably aren’t too many rocks that size in this area.’ I mean, that was a huge rock. It probably was the rock he used, and they just preserved it.” 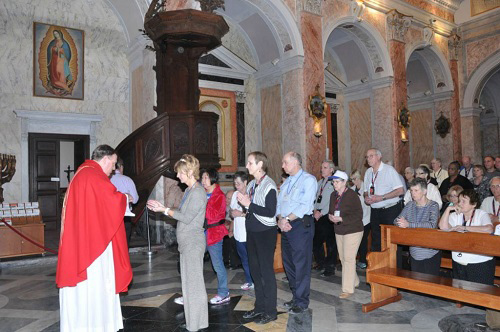 (After the Mass near the rock of Peter’s primacy and visiting Tabgha, the pilgrims headed north to Hermon National Park, where the city of Caesarea Philippi stood in Jesus’ time.)

The city, largely un-excavated at this point, stood at the top of a massive rock cliff, roughly 100 feet tall and 500 feet wide. According to Matt. 16:13-19, this is believed to be where Christ conferred upon Simon the name Peter, or “Kephas” in Hebrew, which means “rock.”

Tony Azrag, the Israeli Catholic and professor of archaeology serving as guide on the pilgrimage, provided insight into the Scripture based on his archaeological knowledge of the area.

He described how in the time of Christ, a large pagan temple to the god Pan was constructed against part of the large rock face. Markers around the remnants of the temple note that children were thrown into a natural spring in a cave within the temple as a sacrifice to Pan. 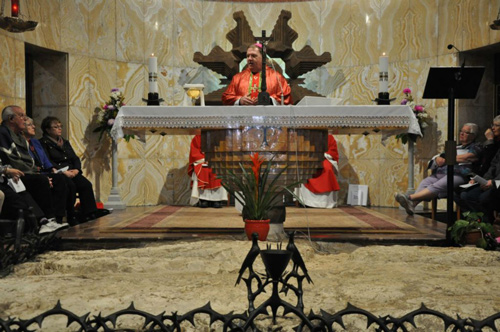 Along the bus journey, Azraq pointed out the type of tree from which Christ’s crown was woven, known as the ziziphus in Hebrew, or by its Latin name, spina Christi (spine of Christ).

“These thorns are shaped like fish hooks,” he said. “And they have venom in them that causes pain for two days [after a person is pricked by them].”

During the bus ride from site to site, Azraq provided other such insights into the history, geography and culture of the region. He also discussed the current situation between Israel and Syria as the bus traveled through the Golan Heights, a region now occupied by Israel since the 1967 Six-Days War.

“I think the tragedy of the recent history of Israel was clear,” said Archbishop Tobin as he reflected on the day. “Seeing the burned out tanks and the army bases [in the Golan Heights], and knowing about the suffering that is going on, that made it very real.” 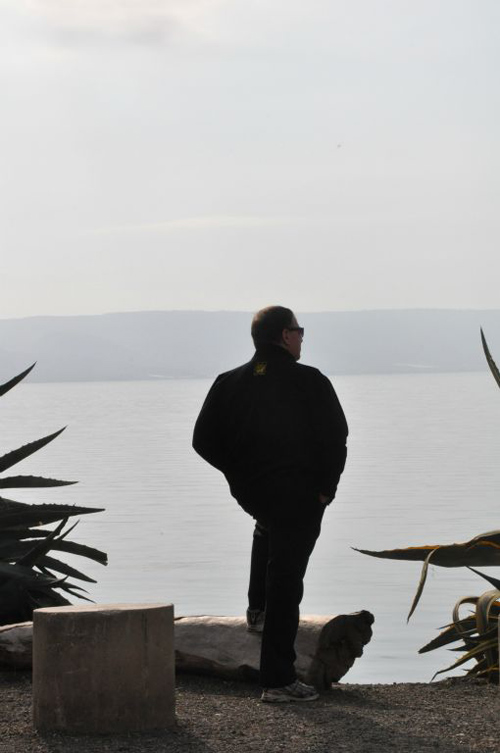 The pilgrims spent more than two hours driving from Tabgha to Caesarea Philippi then south through the Golan Heights and along the eastern shore of the Sea of Galilee back to Tiberius.

“I picture the apostles moving from place to place,” said Mary. “We’re on a bus—they were walking it.”

At the end of the day, Archbishop Tobin reflected on the sites he’d witnessed, all for the first time, as this is his first trip to the Holy Land.

“There was a bit of sensory overload,” he admitted. “For all my life, the multiplication of the loaves and fishes, or Tiberius, these places have been somewhere else—and here we were.”

Check this blog often in the coming week and half for updates, photos, daily prayer intentions and the itinerary.

See more photos of their pilgrimage on Tekton Ministries’ Pinterest board!