The Concrete Jungle of Barcelona: Exploring the Sagrada Familia Part 2

If you read the first part of the Sagrada Familia blog series last, I’m excited to deliver to you the second installment! (If you haven’t read the first part, I invite you to check it out here.) There is so much to describe about this modern marvel that it’s hard to even begin, so let’s start with the first thing you see: the outside.

The Barcelona skyline isn’t really that impressive. All of the buildings tend to blend together; they share the same brown color and none of them soar higher then 3 or 4 stories tall. So when your eye wanders upon the vast Sagrada Familia in the distance, it seems even greater in size. When I first emerged from the subway station that is conveniently located on the same block, I remember feeling so overwhelmed by the gargantuan structure that seemed to cover the entire sky. As I walked around the block to get in line for a ticket, my group stopped in front of the first of the three facades: The Nativity.

The Nativity Facade
One thing that I greatly admire about this church is that the eye is never bored by repetition or lack of design. There is always something to look for and to discover. The Nativity Façade is no exception to this. The only of the three facades that Gaudí saw to completion before his untimely death, this dedication to the birth of our Lord was finished in 1926.  Being the oldest of the three facades, it is probably the closest to what one would classify as “traditional.” Biblical figures are surrounded by natural elements, giving it the appearance of a great stone coral reef when viewed from a distance. As you get closer your eye starts to flicker about to rest on the different scenes and persons depicted.

This façade is split up into three different sections, each one named after the virtues of Faith, Hope, and Charity. Front and center in the Charity section is the depiction of the Nativity, with the Holy Family gathered around the newly born Savior’s manger cradle. Flanking them on either side are the three kings and shepherds who have journeyed to pay Him homage. As your gaze rises up still higher, there you will find the Annunciation of the Archangel Gabriel to the Virgin Mary. Even higher still, the Coronation of Mary crowns the the section.

To the left of Charity resides Hope. This section is far smaller than its neighbor, with its crowning glory being the wedding scene of Mary and Joseph. Below them stands the father Joseph holding the child Jesus, with the likenesses of the holy parents of Mary, Sts. Joachim and Anne, flanking them on either side. Also depicted in this section is the sacrifice of the Holy Innocents in Egypt, whose feast is traditionally celebrated on December 28th in Barcelona as a day of joke playing (due to an unfortunate translation of "Holy Innocents"), almost like the American equivalent of April Fool’s Day.

Now shift your gaze far to the right side and you will find the last section, Faith. With the same dimensions as Hope, depicted here is Jesus as a youthful carpenter. Just opposite is the scene of the Visitation, and just above the doorway is a seated child Jesus, representing the Finding in the Temple. Above the child Jesus is the depiction of the Presentation of Jesus in the Temple, and higher still above that, is the crowning glory of this section, the Immaculate Conception. 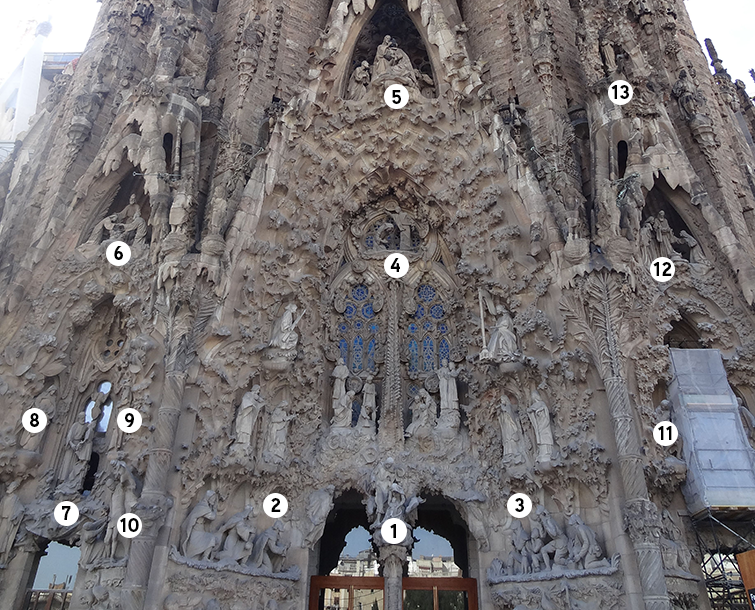 (Exhale) That’s a lot of stuff. Just trying to find the most simplistic way to describe it is a little overwhelming for me. But look at what all of that “stuff” has to say about the Catholic faith, how deep it grows and how full and complete it is and has become throughout history. In order to communicate only the first few years surrounding our Lord’s birth, it takes up a façade that’s the width of a city block! It certainly brings about an appreciation for the abundance of teachings that the Church has upheld throughout her history.

The Passion Facade
If you walk around to the exact opposite side of the basilica, you will find just that- the exact opposite of Jesus’s birth: his death. This side facing the west is the Passion Façade. Started in 1987 and still currently under construction, this is the second of the three planned facades. As you gaze upon this exterior, you will immediately realize that it is a stark contrast from its counterpart. Every sharp cut and harsh edge of the figures that decorate this outside wall are a far-cry from the traditional softness and organic shapes that are found upon the Nativity façade.  Going against Gaudi’s original plans, this intentional design choice gives the somber scenes depicted a sense of gravity and deliberate sorrow.

Starting from the lower left side and ending at the upper right of the façade, the eye follows an S shape and stops upon 10 distinct scenes that are depicted throughout the Easter Triduum. Starting with the Last Supper and ending with the burial in the tomb, every step along the way provides the viewer with an emotional experience as they accompany Christ through his passion.

One of my favorite things about this façade is the central doorway that is found behind the scourging of Christ. The doors found here are pretty hefty; measuring about 1 foot in thickness. Inlaid on the exterior are bronze words in Catalan, the local language, of the passion story found in the Gospel. As you enter these doors you are literally walking into the midst of Christ’s Passion as you approach the altar where the priest will again bring that moment into life through the sacrament of the Eucharist. 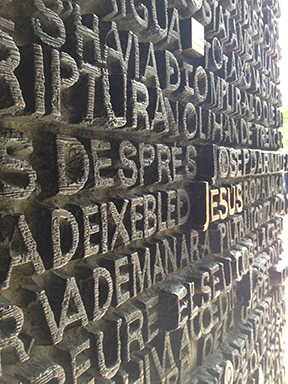 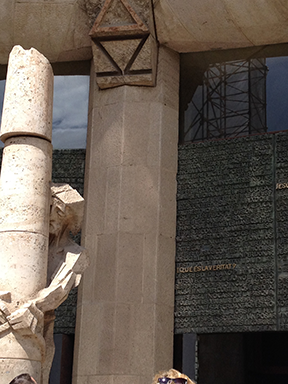 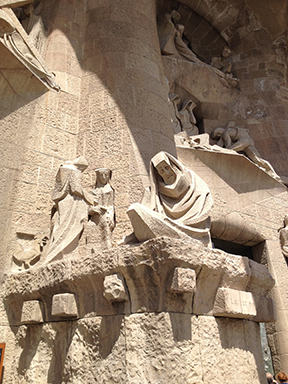 6. Simon helps Jesus carry the cross
7. Veronica wipes the face of Jesus
8. Soldiers play dice for Jesus’ clothing
9. The Crucifixion
10. Jesus is taken down from the cross

The Glory Façade
The third and final façade is oriented towards the south- and it doesn’t quite exist yet! It is still under construction, and when it's complete, will be dedicated to the Glory of Jesus. When I visited in 2014, I believe it was covered in scaffolding and sheets; this façade will eventually become the main entrance to the Basilica upon its completion.

If you think that the outside of the Sagrada Familia is exciting, just wait until you go inside! As soon as I stepped foot into the nave, I was consumed with wonder and awe, and I definitely think that you can experience the same effect. But for now, I’ll let you absorb all that exterior has to offer, until next time. Stay tuned!

If you want to take a better look at the outside, you can follow this link to take a virtual tour! Better yet, join us on an upcoming pilgrimage to the Marian Shrines of Europe to see it for yourself!

The Concrete Jungle of Barcelona: Exploring the Sagrada Familia Part I

A 400-Year-Old Cathedral, With an Astronaut Carved On the Exterior?

5 Ways to Journey into the Heart of Mary