Do not be afraid.

In the Gospel of Matthew, these are the first words Jesus spoke to His disciples after His resurrection.

Nearly 2000 years later, they were also among the first words spoken to the world by the newly elected Pope John Paul II. In his inaugural papal homily, he invited everyone listening – and all Christians worldwide – to not be afraid to welcome Christ.  “Be not afraid. Open wide the doors for Christ.” This became a common theme throughout his pontificate, especially through his many travels around the world.

On April 30, 2000, Pope St. John Paul II invited the faithful to once again open wide the doors for Christ, but this time focusing on His Mercy.  During the canonization Mass for St. Faustina Kowalska, a fellow Pole, Pope John Paul II also instituted the universal feast of Divine Mercy, which had been celebrated locally for years, but was now an official feast of the Church liturgical calendar. It was a fitting moment to institute the feast while celebrating the life of St. Faustina, as she was the one to whom Jesus entrusted the message of Divine Mercy, which she wrote about in her Diary.  However, it was not announced beforehand that it was to happen, so to many it was a pleasant surprise and a true gift from the Holy Father.

Although from the outside, it seemed a sudden an unexpected decision, a look back at the life of St. John Paul shows a lifelong connection to this feast and its message.  Born in Wadowice, Poland, in 1920, the future Pope studied for the priesthood in secret during the Second World War – hidden from the persecution of the Nazi occupiers of Poland.  During his priesthood and later pontificate, he preached love and mercy for all – displaying it in his own life after visiting his would-be assassin in prison and extending to him forgiveness. His 1981 encyclical Dives in Misericordia (Rich in Mercy) even shows that the focus of Jesus’ mission on earth was to reveal the merciful love of the Father.

This he also shared during the homily for the canonization of St. Faustina, as he began:

So the Church sings on the Octave of Easter, as if receiving from Christ's lips these words of the Psalm; from the lips of the risen Christ, who bears the great message of divine mercy and entrusts its ministry to the Apostles in the Upper Room: "Peace be with you. As the Father has sent me, even so I send you.... Receive the Holy Spirit. If you forgive the sins of any, they are forgiven; if you retain the sins of any, they are retained" (Jn 20: 21,23).

Before speaking these words, Jesus shows His hands and His side. He points, that is, to the wounds of the Passion, especially the wound in His heart, the source from which flows the great wave of mercy poured out on humanity.

This wave of mercy is symbolized in the well-known image of Divine Mercy by the red and white rays emanating from the heart of Jesus.  This image hangs in many homes throughout the world and has a special place of reverence at the Divine Mercy Shrine in Krakow, Poland - part of the convent of the Congregation of Our Lady of Mercy.  In a small chapel hanging over the altar under which the relics of St. Faustina can be venerated, millions of pilgrims from around the world come to rejoice in the mercy of Our Lord. As Jesus told Sr. Faustina: "Humanity will not find peace until it turns trustfully to divine mercy" (Diary, 300).

As St. John Paul pointed out later in his homily:

By Divine Providence, the life of this humble daughter of Poland was completely linked with the history of the 20th century, the century we have just left behind. In fact, it was between the First and Second World Wars that Christ entrusted His message of mercy to her. Those who remember, who were witnesses and participants in the events of those years and the horrible sufferings they caused for millions of people, know well how necessary was the message of mercy.

Not only was the life of St. Faustina linked to the world’s need for Divine Mercy, but St. John Paul II also found kinship with his fellow Pole throughout his life – visiting the shrine himself and paying respects to the holy image.  And they are now linked once more in their homeland by two pilgrimage sites lying less than a mile from each other.

Just south of the Shrine of Divine Mercy in Krakow is the St. John Paul II “Be Not Afraid” Center.  Located on Totus Tuus (totally yours) Street, even the name pays homage to his life, as that was the phrase the newly-ordained Karol Wojtyla took as his motto in 1946. This newer sanctuary houses a Museum of St. John Paul II as well as an exhibition of a replica of the Shroud of Turin.  The museum displays souvenirs and personal effects of St. John Paul II, mostly from his time as pope as well as gifts presented to him while he pilgrimaged around the world.

St. Pope John Paul’s life and papacy were linked by his experience of God’s mercy and remembering Christ’s call to be not afraid, and it is only through Divine Providence that these two sanctuaries are now so closely linked in Krakow, Poland.  Pilgrims can steep themselves in the lives of St. John Paul II and St. Faustina, as well as the heart of Divine Mercy, in the same day.

In one final connection tying for eternity his life to the message of Divine Mercy, St. John Paul II died on the eve of Divine Mercy in 2005.  His last words out loud were the prayer, “Let me go to the house of the Father.”  On this, the 20th anniversary of Divine Mercy Sunday, may we all emulate his first and last words as Pope and be not afraid as we accept the mercy our Father in Heaven offers and look forward to the day when we, too, enter eternity with Him in our Heavenly home. 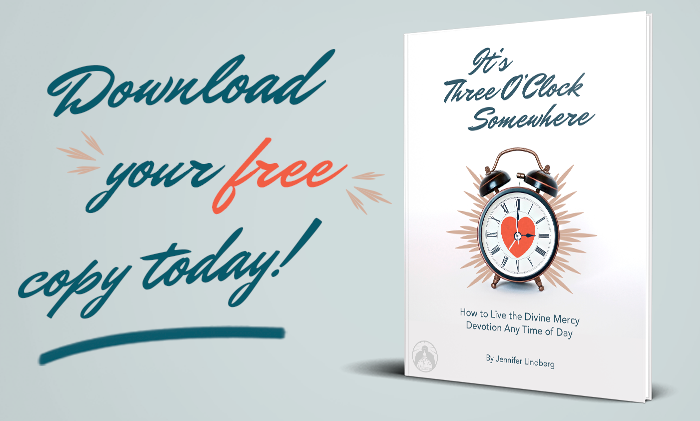 It's Three O'Clock Somewhere: How to Live the Divine Mercy Devotion Any Time of Day is our free spiritual resource for you!