August 14 marks the feast of a saint whose lifetime is not far removed from our own. Born in 1894, small Rajmund would soon grow up to be St. Maximilian Kolbe – Franciscan, radio host, monastery founder, newspaper publisher, and most famously, victim of the Auschwitz death camp.

As a young man, St. Maximilian Kolbe led an ordinary life peppered by an extraordinary event – a visit from the Virgin Mary.  In his vision, Our Lady would lay the tracks for the life that Kolbe would soon live; and, with that, she bestowed upon him a mission that only he could accept:

“That night I asked the Mother of God what was to become of me. Then she came to me holding two crowns, one white, the other red. She asked me if I was willing to accept either of these crowns. The white one meant that I should persevere in purity, and the red that I should become a martyr. I said that I would accept them both.”

From that moment on, Kolbe would be bound to Our Lady in a special relationship. Having dreamt of becoming a man of the Polish military, health conditions forced him to leave that dream behind. He entered into the Conventual Franciscan minor seminary, where he completed his final vows in 1914. Kolbe’s desire to be a soldier would not be fulfilled in the worldly sense but would come to fruition in a far greater mission, one of spiritual warfare.

Shortly after earning his doctorate in philosophy in 1915, Kolbe formed the Militia Immaculata – a movement that prayed for the conversion of those who acted against the Church, especially Freemasons, through the intercession of the Virgin Mary. In 1922, the publication Knight of the Immaculata would be distributed monthly; in 1927 and 1931, he founded two monasteries; and in 1938 he began his own radio station out of the monastery in Niepokalanow, Poland.

Despite living a full and busy life dedicated to Our Lady and her mission, Kolbe would soon come to know more difficult and trying times. After the invasion of Poland brought World War II into his backyard, Kolbe remained at the monastery to welcome fleeing Jews and to administer to the sick at his makeshift temporary hospital. During all this, Kolbe managed to maintain his publishing house and released anti-Nazi materials to the public. It wouldn’t be much longer until Kolbe would fall victim to their brutality and find himself as a prisoner of Auschwitz.

While held captive, Kolbe remained faithful, ministering to his peers despite the brutal torture and punishment that he would face as a result. Perhaps his most well-known act is that which led to his persecution – his willing offer to suffer starvation in the place of a fellow prisoner. While being held in a starvation chamber, Kolbe led those who suffered the same fate in prayer and accompanied them in their final moments on earth. After two weeks in the chamber, Kolbe miraculously remained alive, and he was finally executed with an injection of carbolic acid. On August 14, 1941, St. Maximilian Kolbe was taken from this world, and on August 15, the Feast of the Assumption, he was welcomed into Heaven into the arms of his Beloved Mother.

This saint who lived his life completely devoted and consecrated to Our Lady found himself on the surest way to Christ. Mary lived her own life following Christ – she bore Him to this world, raised Him, searched for Him, walked His path of ministry, and accompanied Him to the cross, finally ending her journey by following Him body and soul into Heaven. As she devoutly followed her Son, she will most passionately and willingly help her children do the same. Through her intercession, we can rest assured that the only way our Mother will take us is straight to Christ, straight to eternal joy and happiness, and straight to the kingdom of sainthood. As St. Maximilian Kolbe entrusted the path of his life to Our Lady, may we too be open to her gentle guidance and abundant graces. 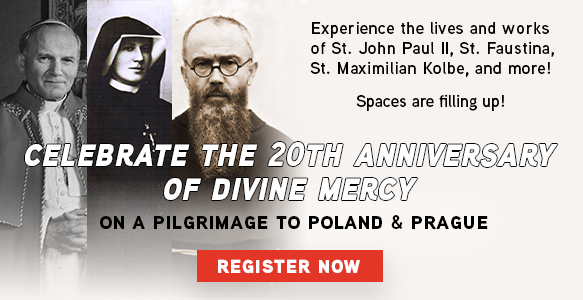