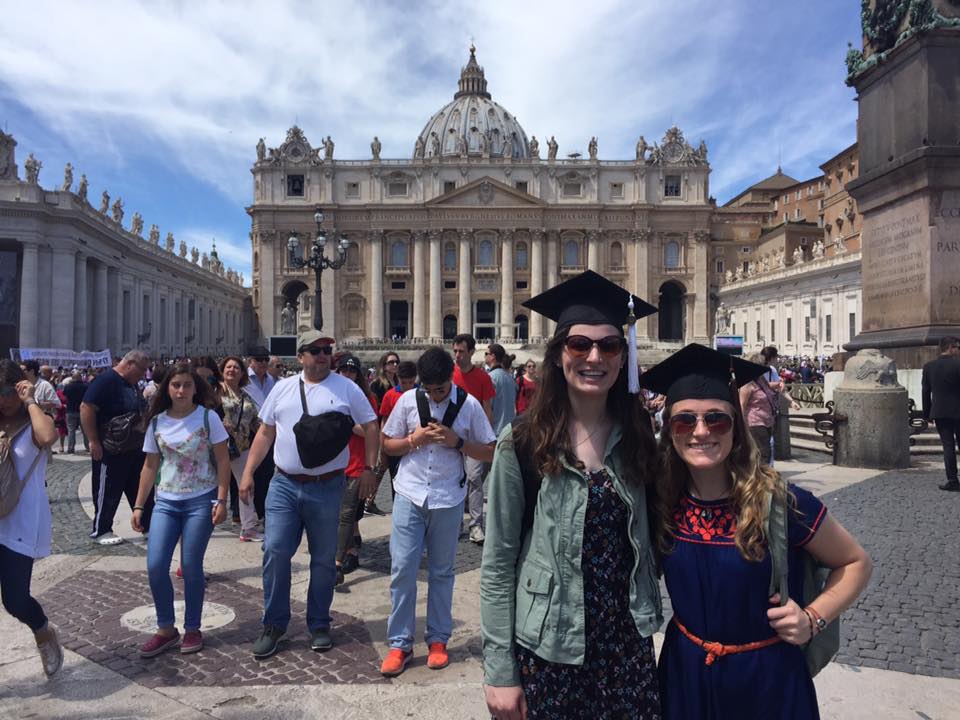 When in Rome, Graduate!

When given the option of either journeying to Rome or attending her own college graduation, it was a no-brainer for Indiana University Indianapolis senior Bri Campbell. For the past four years, she had dedicated any and all free time she had to the Catholic student community on campus and the parish associated with it, St. John the Evangelist Catholic Church. When told by the pastor, Fr. Rick Nagel, that the parish would be embarking on a pilgrimage to the Vatican, she didn’t think twice about going, even when she discovered that meant forgoing the rite of passage that she had been looking forward to since her freshman year.

After briefly (very, very briefly) debating between the two options before her, Bri decided that going to Rome simply was the best course of action. “My college career is when I really embraced my faith and I’ve invested so much time in the community at St. John’s, this just seemed to be the option that made the most sense,” she says. “What better way could I finish up this stage of my life than by visiting the home and center of the Catholic faith itself?” 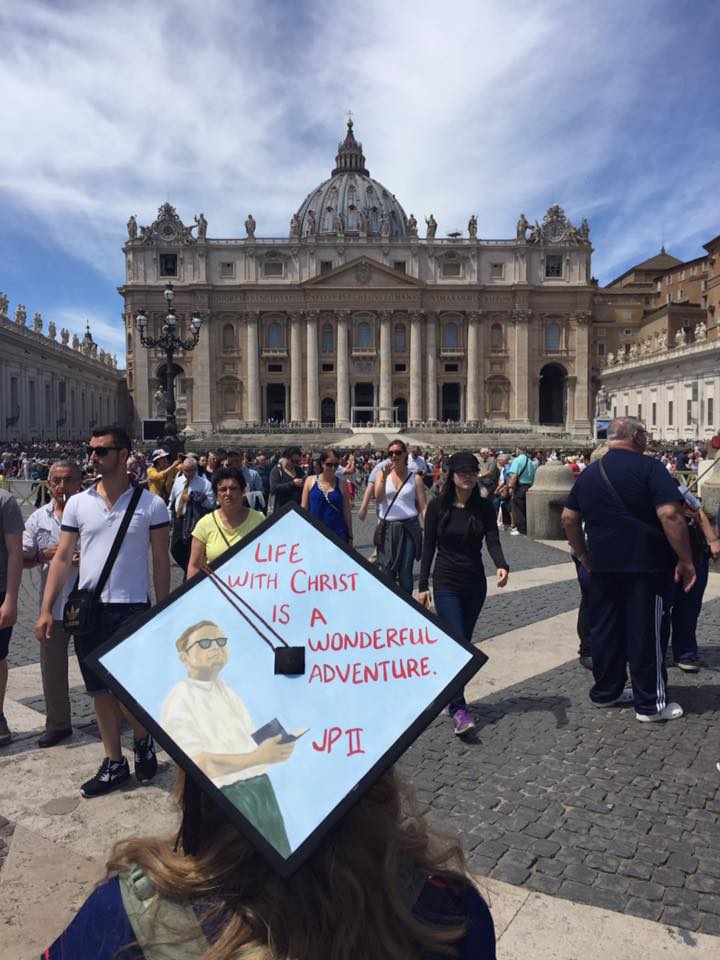 So that’s how, after nearly a year of anticipation, Bri found herself standing in front of St. Peter’s Basilica next to her good friend and fellow graduate, Erin Crowther, on May 14th, the day of their college graduation. They both donned their mortarboards, took the graduation pictures that their moms would be missing out on, and reflected on the great blessing they had received: to be standing in St. Peter’s Square, only a few hundred feet away from Pope Francis, and surrounded by the community and priest that had been with them in their faith formation for the past four years.

The opportunity to visit and witness such influential and well-known holy sites of the Catholic Church was an experience that was only enrichened by the presence and accompaniment of the St. John’s community. Sure, anybody can visit Rome at a time of their own convenience, but when you can do it alongside your brothers and sisters in Christ, the Holy Spirit becomes more alive in the relationships that you hold with those fellow pilgrims. “That week and a half that I spent in Rome continues to live here in Indianapolis when I see a few pilgrims at Sunday Mass, or catch up with them at Thursday night Adoration,” Bri says. “We often remember and reflect on everything that we did. There’s a special bond between the St. John’s pilgrims, between people of all ages and stages of life. Some were ready to go on their second pilgrimage before we even left Italian soil!”

“I’ll always remember this pilgrimage. I think a lot of my friends and family understood it as more of a vacation, but it was filled with so many better things. The opportunity to celebrate Mass every day and pray in so many churches and shrines, to witness the beauty that those before us left as a reminder of our faith was so relaxing, rejuvenating, and overwhelmingly positive,” she says. “I have so many special connections and memories with people who genuinely care about their faith and continuing to further it. I couldn’t have asked for a more wonderful experience or for a better way to end one chapter of my life and begin another one.”