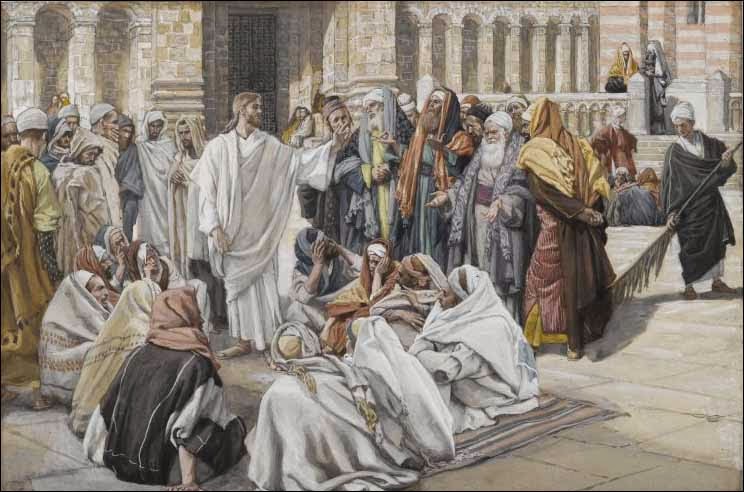 “You are like unseen graves”
Why does Jesus single out the teachers and lawyers for some rather strong words of rebuke? The word woe is as much an expression of sorrowful pity as it is of anger. Why did Jesus lament and issue such a stern rebuke? Jesus was angry with the religious leaders because they failed to listen to God’s word and they misled the people they were supposed to guide in the ways of God. The scribes devoted their lives to the study of the Law of Moses and regarded themselves as legal experts in it. They divided the ten commandments and precepts into thousands of tiny rules and regulations. They were so exacting in their interpretations and in trying to live them out, that they had little time for anything else. By the time they finished compiling their interpretations it took no less than fifty volumes to contain them! In their misguided zeal, they required unnecessary and burdensome rules which obscured the more important matters of religion, such as love of God and love of neighbor. They were leading people to Pharisaism rather than to God.
Jesus used the example of tithing to show how far they had missed the mark. God had commanded a tithe of the first fruits of one’s labor as an expression of thanksgiving and honor for his providential care for his people (Deuteronomy 14:22; Leviticus 27:30). The scribes, however, went to extreme lengths to tithe on insignificant things (such as tiny plants) with great mathematical accuracy. They were very attentive to minute matters of little importance, but they neglected to care for the needy and the weak. Jesus admonished them because their hearts were not right. They were filled with pride and contempt for others. They put unnecessary burdens on others while neglecting to show charity, especially to the weak and the poor. They meticulously went through the correct motions of conventional religion while forgetting the realities. 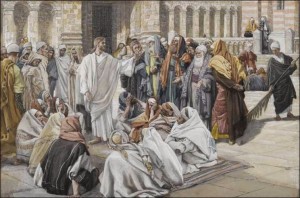 Why does Jesus also compare them with “unmarked graves”? According to Numbers 19:16 contact with a grave made a person ritually unclean for seven days.  Jesus turns the table on the Pharisees by declaring that those who come into contact with them and listen to their self-made instruction are likewise defiled by their false doctrine. They infect others with wrong ideas of God and of his intentions. Since the Pharisees are “unmarked”, other people do not recognize the decay within and do not realize the danger of spiritual contamination. The Pharisees must have taken Jesus’ accusation as a double insult: They are not only spiritually unclean themselves because they reject the word of God, but they also contaminate others with their dangerous “leaven” as well (see Luke 12:1).
What was the point of Jesus’ lesson? The essence of God’s commandments is love – love of the supreme good – God himself and love of our neighbor who is made in the image and likeness of God. God is love (1 John 4:8) and everything he does flows from his love for us. God’s love is unconditional and is wholly directed towards the good of others. True love both embraces and lifts the burdens of others. Paul the Apostle reminds us that “God’s love has been poured into our hearts through the Holy Spirit which has been given us” (Romans 5:5). Do you help your neighbors carry their burdens? God gives each of us sufficient grace for each day to love as he loves and to lift the burdens of others that they, too, may experience the grace and love of Jesus Christ.
(Adapted from Don Schwager)