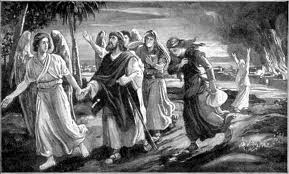 “For the sake of those ten, I will not destroy it.”
But ten he could not find.  They were all wicked.  So after Lot and his family left, it was destroyed.  At least, that is how it has been interpreted for us in the oral and written stories that combined to form the Book of Genesis from which we read today.

We hear about the wicked, too, in the Gospel today.  Jesus, speaking to his disciples said, “If you then, who are wicked, know how to give good gifts to your children, how much more will the Father in heaven give the Holy Spirit to those who ask him.”  And these were not those who were persecuting him but his disciples.
So we see there is a wickedness to man that is almost inherent. We have called in original sin and after Baptism, which we hear about in the second reading, concupiscence- the active and dynamic stain of original sin.
Let’s look at the ones who society usually condemns as wicked. The drug addicts.  Criminals.  Ex-Catholics.  The list can go on forever before it reaches its origin and end- ourselves.  How should we treat them?  Should they be destroyed by the fire of Sodom and Gomorrah?  Should they be nailed to the Cross with the law that bound us to punishment and death? 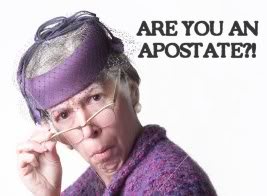 “If you then, who are wicked, know how to give good gifts to your children, how much more will the Father in heaven give the Holy Spirit to those who ask him.”  If the wicked know how to be kind to their own children, can’t you see how much more our Heavenly Father, who is not wicked, can be kind to all his children? 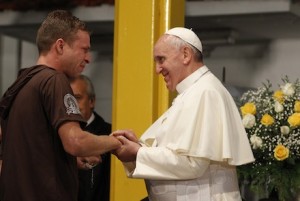 Have you been watching the news about Pope Francis?  Did Fox report that he destroyed the imprisoned youth on Holy Thursday?  Did he destroy the drug addicts at St. Francis Hospital in Brazil?  Has he destroyed the ex-Catholics that have reached out to him in hope?  No!  He has embraced them!  Kissed them!  Listened to them!  Encouraged them!
And so our Holy Father has shown us the love of our Heavenly Father.  And in doing so, Pope Francis as become a living icon of the Lord’s Pray that we hear Jesus himself teaching in the Gospel today.  Through his actions, Pope Francis becomes a living definition of the words “and forgive us our sins for we ourselves forgive everyone in debt to us.”  Our modern translation, “forgive us our trespasses as we forgive those who trespass against us.” 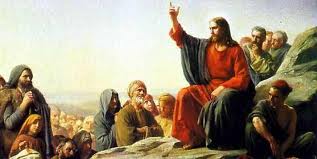 Do not seek to destroy the wicked for you know not why they are “wicked”. See to follow the Pope’s example as he follows Jesus’ example.  Embrace and kiss the wicked in loving mercy and forgiveness. 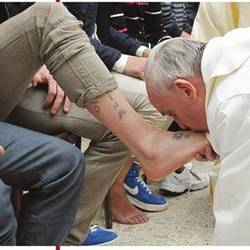