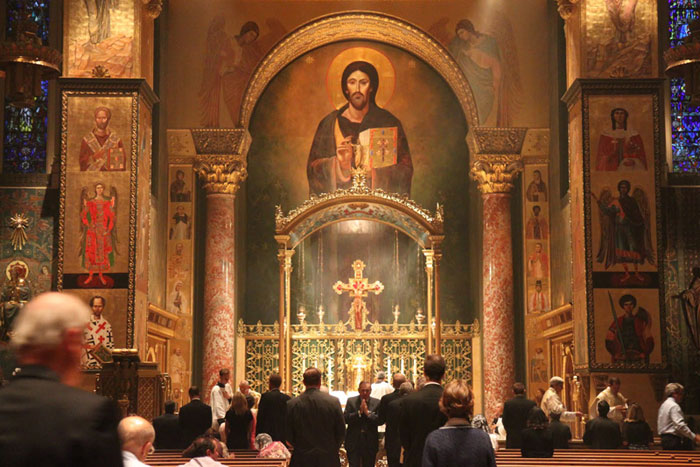 (First Things) For the past three months, parishioners and friends of the Church of Our Saviour on Park Avenue in midtown Manhattan have been wondering what happened to the fourteen icons that were removed from two pilasters in the sanctuary on the evening of August 22. They have also been wondering why the artwork was removed in the first place. It was integral to the church’s wall-to-wall iconography, which had been commissioned by the previous pastor and funded in part by the Vatican. Other icons in the sanctuary remain. Those that are now missing were integral to the “sacred geometry of the whole sanctuary,” as their artist, Ken Woo, describes them. Their sudden disappearance has been as conspicuous as their presence was.

Neither the current pastor nor any spokesperson for the parish has offered a public explanation. No notice has been placed in the parish bulletin or in the church vestibule. The pastor did not respond to my requests for an interview. Conflicting reports abound.

Church of Our Saviour in NYC before new pastor removed 14 of 30 icons without notice or explanation.

Woo told me in September that his lawyer contacted the pastor, who replied by email that the icons would be permanently displayed in the church basement. Noting that “the sanctuary was designed with all the icons in mind at the concept stage,” the artist contends that removing some of them “destroys . . . the integrity of the work of art” that was the nearly thirty icons taken together, arranged just so. The effect of the densely packed, deeply pigmented Byzantine-style art was indeed remarkable. Tastes vary, but many found the design of the whole to be gorgeous. It won awards.

Giving the benefit of the doubt to the new pastor, a senior member of the diocesan presbyterate, a local priest suggested to me that the church interior was “busy” and that the reason for pruning it of some art could have been to keep the worshipers’ focus on the tabernacle and the altar. Mary Durkan, a longtime parishioner who spoke with me about the icons, also volunteered her opinion about distractions from Our Lord’s presence in the sanctuary, but her perspective surprised me.

The art never bothered her. She said that what now impedes her concentration is the priest himself…