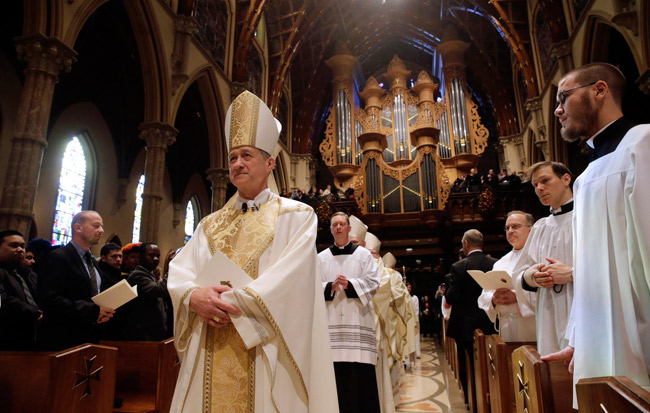 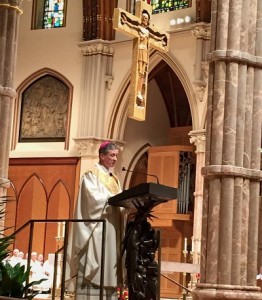 Archbishop Cupich, 65, succeeds Cardinal Francis George, who had headed the Chicago archdiocese since 1997. Cardinal George is battling cancer for the third time at age 77 and chose to step down as head of the local Church.

Archbishop Cupich had served as Bishop of Spokane, Wash., since 2010 and previously headed the Diocese of Rapid City, S.D.  Born in Omaha, Neb., to a family from a Croatian background, Archbishop Cupich is one of nine siblings. More than 50 family members attended his installation Mass. Also attending were several cardinals, dozens of bishops, and civic and religious leaders including Chicago Mayor Rahm Emmanuel. (CNA, Kevin Jones) 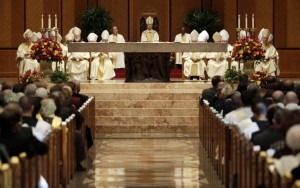 (CNS, by Michelle Martin) — At his installation as the ninth archbishop of Chicago Nov. 18, Archbishop Blase J. Cupich urged the congregation at Chicago’s Holy Name Cathedral to fearlessly share their faith recognizing that God calls them “to more” and “to greater things.”

Before an overflow crowd, the archbishop said he had “a bit of a panic attack” when he saw the day’s Gospel reading was about Jesus walking on water and calling his disciples to follow him.

“I realize this new responsibility is going to be demanding,” he said in his homily, “but seriously folks, I don’t do ‘walking on water.’ I can barely swim. So I hope this image in today’s Gospel is not reflective of anyone’s expectations.” 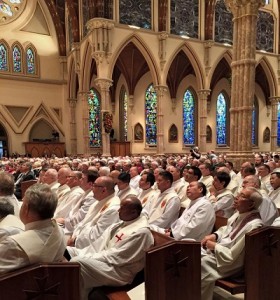 During the Mass at Holy Name Cathedral, the Archdiocese of Chicago welcomed its ninth archbishop with several outpourings of applause and gratitude for Archbishop Cupich and his predecessor, Cardinal Francis E. George.