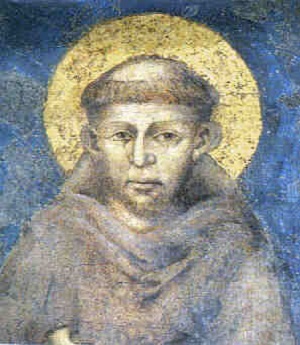 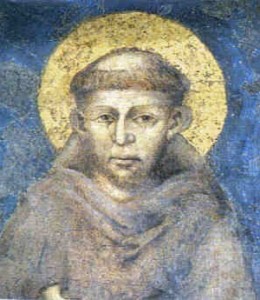 I never got the thing with St. Francis and the birds.  I mean, I know he preached to the birds but that was only once, maybe twice, according to solid, academic, biographical resources on the saint’s life.  Why are the birds such continuous companions to St. Francis art work? Even Friars themselves joke of their beloved founder’s statues as the “typical garden-type bird baths”.  I mean the man raised people from the dead, drove out demons, cured the sick and boldly preached the Gospel!  Enough with the birds already.
Anyway, now that I’m off my soapbox I want to talk about birds.  No, really.  To wake up in Assisi is to wake up to the most beautiful sights and sounds this side of the great divorce.  Death, I mean.  Only heaven and its hosts of angels could sound more beautiful than the swooping, soaring, sitting, singing birds that populate the Assisi skies at the break of day. 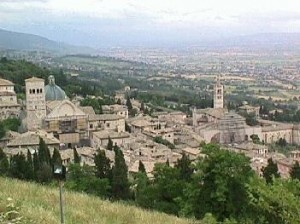 On a pilgrimage to Rome and Assisi a few years ago, I had no idea I would wake up to such a glorious array of birds singing so beautifully.  Opening the real, wooden shutters I was struck by the patchwork of green and brown fields in the valley below.  Never could I have been prepared for the amount of birds that seemed to being joyfully playing in the air above St. Francis’ hometown.
G.K. Chesterton once wrote about St. Francis as only Chesterton could.  His book became famous.  In chapter 2 of the same he masterfully commented on Francis’ greeting of the dawn after a long night in prayer. This is what he wrote.

While it was yet twilight a figure appeared silently and suddenly on a little hill above the city, dark against the fading darkness. For it was the end of a long and stern night, a night of vigil, not unvisited by stars. He stood with his hands lifted, as in so many statues and pictures, and about him was a burst of birds singing; and behind him was the break of day.

Assisi and its birds still greet waking pilgrims as they greeted the still-awake saint who prayed through the night, often.  Making a pilgrimage to Assisi is worth every cent.  Seeing the birds is worth a few more.