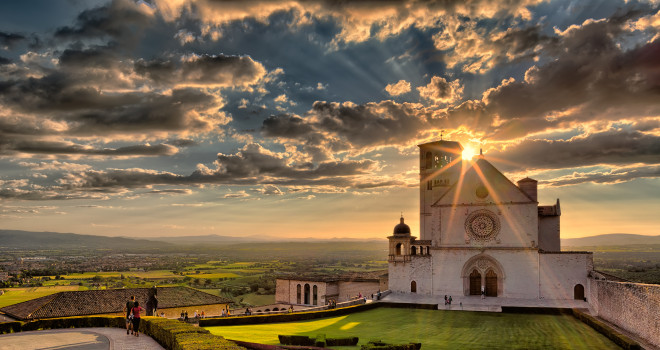 (Vatican Radio) The Franciscans and the Bishop of the Italian hill town of Assisi, Domenico Sorrentino announced on Monday that Pope Francis will visit the Umbrian village on Thursday August 4th. During the afternoon visit to the Porziuncola inside the Basilica of St. Mary of the Angels, the Pope will officially mark the 8th centenary of the event known as the “Pardon of Assisi.”

The papal trip to Assisi is being described as a private pilgrimage to the tiny chapel which St. Francis built and where he founded the Franciscan order at the beginning of the 13th century.

Over the centuries the simple stone hut has been beautifully decorated by artists depicting events from the life of the ‘poor man’ of Assisi, as St. Francis is known here in Italy. The frescos include scenes portraying the origins of the Pardon, or Indulgence, which is celebrated at the beginning of August each year.

According to tradition, on August 1st 1216, St. Francis was praying inside the chapel when he had a vision of Christ and Our Lady surrounded by a dazzling cloud of angels. As Francis lay prostrate on the ground, he heard the Lord asking what he wanted for the salvation of souls and he responded by asking God to grant an plenary indulgence – the remission of the temporal punishment of all their sins – to all pilgrims who visited the church.

The Lord granted his request on condition that he gained approval from the pope of that period, Honorius III. The following day Francis went to see the pope who approved of his petition and since then the feast of the Pardon of Assisi has been celebrated between Vespers on August 1st and sundown on the following day.

According to the President of the Pontifical Council for New Evangelisation, Archbishop Rino Fisichella, the Pope will pray inside the Porziuncola, highlighting the importance of this 800th anniversary and its significance during the Jubilee Year of Mercy being celebrated by the Church throughout the world this year.