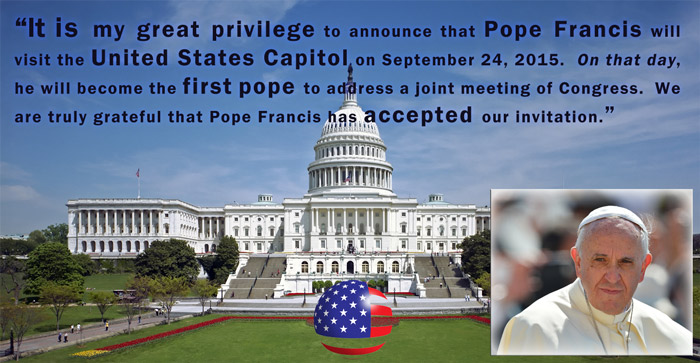 Pope Francis to Address a Joint Meeting of Congress in September

Pope Francis will visit Congress and be the first Pope to ever address a joint meeting of the United States Congress.  Pope Francis will make his stop on the hill on Thursday, September 24, 2015, during his trip to the United States.  In addition to attending the World Meeting of Families in Philadelphia, he will also visit the White House.  The Pope is then scheduled to visit New York City where he will address members of the United Nations and make a prayerful pilgrimage to “Ground Zero”, the site of the terrorist attacks on the World Trade Center on September 11, 2001.

“It is my great privilege to announce that His Holiness Pope Francis will visit the United States Capitol on Thursday, September 24, 2015. On that day, he will become the first leader of the Holy See to address a joint meeting of Congress. It will be a historic visit, and we are truly grateful that Pope Francis has accepted our invitation.

“In a time of global upheaval, the Holy Father’s message of compassion and human dignity has moved people of all faiths and backgrounds. His teachings, prayers, and very example bring us back to the blessings of simple things and our obligations to one another. We look forward to warmly welcoming Pope Francis to our Capitol and hearing his address on behalf of the American people.”

(CNA/EWTN News) The Philadelphia World Meeting of Families will take place from Sept. 22-27. Even before the Pope’s announcement, the meeting was expected to draw tens of thousands of people. Archbishop Charles J. Chaput of Philadelphia had told a gathering of Catholic bishops last week that a papal visit would likely result in crowds of about 1 million.

A global Catholic event, the world meeting seeks to support and strengthen families. St. John Paul II founded the event in 1994, and it takes place every three years.

Archbishop Chaput had previously hinted that Pope Francis would attend the 2015 meeting, although he cautioned that the visit had not been officially confirmed. In March 2014, a Pennsylvania delegation including Pennsylvania Gov. Tom Corbett and Philadelphia mayor Michael Nutter visited the Vatican to help encourage the Pope to visit the U.S.

The 70th anniversary of the U.N.’s founding would be “the ideal time” for a papal visit, the archbishop said Nov. 13. Next year also marks the 50th anniversary of Pope Paul VI’s 1965 visit to the U.N., the first such visit from a Pope.

In August, on his return flight from South Korea, Pope Francis said he wanted to visit the U.S. in 2015 for the Philadelphia gathering. He also noted that he had received invitations from President Barack Obama, Congress and U.N. Secretary-General Ban Ki Moon, as well as from Mexico.

However, despite the anticipation of the Pope’s possible visit to New York and Washington while in the U.S., Vatican spokesman Fr. Federico Lombardi S.J. told journalists shorly after the announcement that as of now nothing else is confirmed.

The Pope, he explained, “didn’t say anything about any other steps or moments in his trip to America. He guaranteed his presence to the organizers of the World Day for Families, but as for the rest, I have no concrete information.”

Pope Francis has visited the Holy Land and Albania as well as South Korea. He will visit France and Turkey in November, and Sri Lanka and the Philippines in January 2015. He will return to France for a longer visit in 2015.

In June, the Pope accepted an invitation to visit Mexico, though a date for the visit was not announced.

The World Meeting of Families will take place shortly before the October 2015 meeting of the Synod of Bishops on the Family, which will discuss the mission of the family in the Church and in the world.

At the last World Meeting of Families in Milan, Italy in 2012, more than 1 million people representing 153 nations attended a papal Mass with Pope Benedict XVI.

The Philadelphia meeting will mark the first time that the event will be held in the United States.

Registration for the 2015 World Meeting of Families began on Nov. 10.