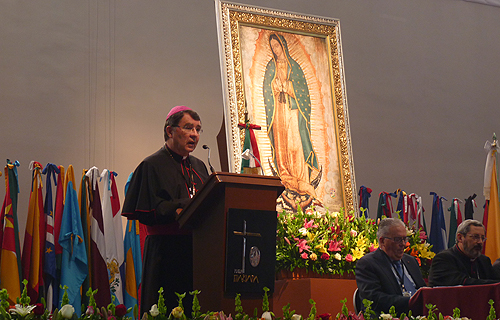 The appointment of the new Vatican ambassador – known as an apostolic nuncio – comes after Archbishop Viganò reached the retirement age of 75 on Jan. 16 of this year. The Italian prelate had served as apostolic nuncio to the U.S. since 2011.

It had been speculated that the role of papal nuncio to the U.S. would fall to Archbishop Pierre, who has been nuncio to Mexico since 2007. As reported by CNA, Vaticanista Sandro Magister asserted in his March 10 blog that the 70-year-old Archbishop Pierre would be “imminently” promoted to the position.

Magister characterized Archbishop Pierre as a “Bergoglian,” and someone in whom Francis confides.

Additionally, a source close to the Mexican bishops’ conference told CNA that Archbishop Pierre “is known for suggesting solid, reliable candidates to the episcopate.”

The French prelate was ordained a priest of the Archdiocese of Rennes in 1970. In 1995 he was consecrated a bishop and appointed apostolic nuncio to Haiti. He served there until 1999, when he was transferred to Uganda.

In an April 8 speech at the Pontifical North American College’s annual rector’s dinner, Archbishop Viganò offered a farewell reflection of his four and a half year “mission” as the Pope’s representative to the U.S., and the challenges against religious liberty in the country.

“As everyone knows, the past years have been very challenging for the Church in America,” he said, acknowledging in turn other significant events, including Pope Francis’ visit to the U.S.

He stressed the need to pray “that the United States of America will protect our freedom, especially our religious liberty, as well as respect the human right to conscientious objection, and that we will be courageous in always defending the freedom to put our Catholic faith into practice without fear.”

“This is an age when we need great courage—courage to stand up for the Truth, even when we are not understood, or persecuted when we are understood. We need to be strong in the face of evil.”