Pilgrimage to the Shrines of Italy - June 2019 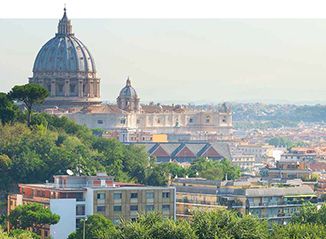 Our pilgrimage begins as we depart on our overnight flight to
Rome. Meals and refreshments will be served aloft.

After our morning arrival in Rome we will drive north through
the beautiful Umbrian countryside to Assisi, a town which
welcomes us in the spirit of St. Francis and St. Clare into its
peaceful interior. Visit St. Mary of the Angels Basilica, site of
the Porziuncola, the tiny church in the woods where St. Francis
began his ministry and where St. Clare began her religious life.
After Mass we will check-in to our hotel and have some free
time before dinner.

This morning enjoy a tour of Assisi including visits to the
Convent of San Damiano where the miracle of the Eucharist of
1211 took place, the Basilica of St. Francis where Mass will be
celebrated, and the Basilica of St. Clare. Then for those with
the stamina, take a walk up Monte Subasio to L’Eremo delle
Carceri (the Carceri Hermitage), the Saint’s favorite retreat.
There are many caves here that St. Francis and his followers
retreated to for seclusion and prayer. Overnight in Assisi.

This morning we will drive to Siena, home of St. Catherine.
Our first stop this morning and a highlight of our tour will be
the Basilica of St. Francis where we’ll venerate the Eucharistic
miracle of Siena. Hosts which have remained incorrupt since
1730. Then we’ll celebrate Mass at St. Dominic’s, St. Catherine
of Siena’s parish church where she attended daily Mass and
went into ecstasy. Adjacent to the church is her home, which
we’ll tour and see the cell where she fasted and prayed. Then
we’ll stroll the ancient Gothic streets which converge on the
Piazza del Campo, one of the most beautiful squares in the
world where we can stop for lunch. Return to Assisi.

This morning we depart Assisi and drive to Orvieto where we’ll
visit Signorelli Chapel in the Cathedral of Orvieto and venerate
the sacred Eucharistic miracle. See the steps of the Papal
summer residence where Pope Urban IV held up the bloodstained
corporal and announced his intention to institute the
Feast of Corpus Christi. After Mass we will continue our drive
south to Rome our home for the next six nights.

This morning we’ll head to the Mamertine Prison where St. Paul
was kept in chains, view the Forum (outside visit) and Coliseum
(outside visit) and stop at St. Clement’s, to see the second
century dwelling of Pope St. Clement, the third successor of St.
Peter, and the original fresco depicting St. Clement celebrating
the Holy Sacrifice of the Mass. This fresco gives us a picture of
Eucharistic worship at the end of the first century or beginning
of the second. We will celebrate Mass and then proceed to
St. Peter in Chains to view Michelangelo’s magnificent Moses
followed by a stop at St. Mary Major.

This morning we will visit and celebrate Mass at St. Paul
Outside the Walls which was originally built by Constantine in
the fourth century over the site of St. Paul’s tomb. After our
Holy Hour, we will visit the Catacombs of San Callistus. In the
afternoon, visit Santa Maria in Vallicella (also known as Chiesa
Nuova) which was founded by St Philip Neri in 1561, the Church
of the Gesù which is the mother church of the Jesuits, and the Church of Sant’Agostino in honor of St. Augustine and where the remains of St. Monica now rest.

We will spend our whole day at the Vatican beginning with Mass
in St. Peter’s Basilica, followed by a tour including the Pieta and
Adoration Chapel which our Pope St. John Paul II opened in
1981. We will then climb up to the Cupola of St. Peter’s Basilica
for a breathtaking view of Rome. Afterwards we will tour the
Sistine Chapel and the Vatican Museum, focusing especially on
Eucharistic art and artifacts.

This morning we’ll visit the Holy Stairs and the Basilica of St.
John Lateran where we will celebrate Mass. After our Holy
Hour, we will visit the Trastevere district of Rome. Go to the
Church of St. Cecilia and then visit the Basilica of Santa Maria –
a titular minor basilica, and one of the oldest churches of Rome.
Visit the Trevi Fountain where a coin thrown over your shoulder
will guarantee you another visit to Rome; the Pantheon; Piazza
Navona with the famous Bernini’s fountains. The rest of the
afternoon will be free for personal activities.

This morning we will celebrate Mass at the Basilica of San
Lorenzo and have some time for adoration. We will then
experience a highlight of our pilgrimage, attendance at the
Papal Audience at St. Peter’s (subject to the Holy Father’s
schedule). Join thousands of pilgrims from throughout the
world to listen to the Holy Father and receive His Blessing. The
remainder of the day free for personal activities. This evening
enjoy a farewell dinner at a local restaurant.

Following breakfast, we will transfer to the airport to catch our
return flight home. 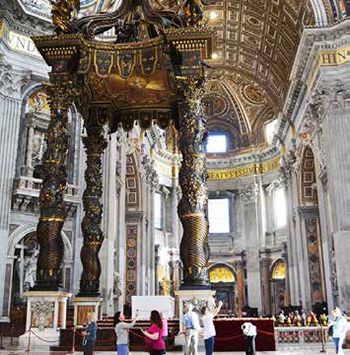