Pilgrimage to the Saints and Shrines of Italy - October 18, 2021

Stunning Florence awaits with masterpieces of art giving glory to God before journeying to medieval Assisi with ancient walls and pathways that St. Francis and St. Clare walked. We pray at Eucharistic miracles to enrich our faith and encounter the splendors and layers of history in Rome. Visit the Sistine chapel, significant churches, and saints' tombs. A side trip to St. Benedict's famous Montecassino Abbey is a highlight of the trip before returning to Rome for a papal audience and more.

Upon arrival in Florence, we are met at the airport by our tour manager, who will be with us for the duration of our pilgrimage. Celebrate Mass and then check-in at our hotel, home for the next 2 nights. The balance of the day is free to explore this beautiful city on your own.

Florence is a city of masterpieces where numerous churches and family chapels were painted by the greatest artists of the Renaissance to give Glory to God. We’ll enjoy a full city tour of this magnificent Renaissance city today. Stroll the same streets Michelangelo, Leonardo Da Vinci, and Botticelli walked. Gaze at artwork so divine it is still moving hearts, centuries after its creation. Where else can one admire Michelangelo’s David, gaze at the famous Perseus statue by Benvenuto Cellini, eat the best food, and go into deep contemplation all in one day? See the famous dome on Florence’s cathedral – Duomo di Firenze – that dominates the skyline, and walk along the Ponte Vecchio, the famous bridge designed by a Dominican friar. Visit the Baptistry chapel, where thousands have received the Sacrament of Baptism, with its bronze Gates of Paradise showcasing fabulous castings of the Old Testament that seem to come to life. Continue onto Santa Maria Novella Church whose religious artwork is prized throughout the world. Enter the Santa Croce Church with its 16 chapels of superb frescoes by Giotto and see where Italy’s most famous Italians are buried: Michelangelo and Galileo.

We begin our day in Rome with morning Mass in St. Peter’s Basilica, followed by a tour of St. Peter’s including the Pieta and Adoration Chapel. We will venerate our parish patron, St. Simon, whose relics are buried under the St. Joseph’s altar along with St. Jude. We will then enjoy a tour through the peaceful Vatican Gardens. Afterwards, we walk through the Vatican Museums which house artifacts from the around the world and Eucharistic art to prepare ourselves for the greatest masterpiece yet: The Sistine Chapel. Painted by Michelangelo, it is the most famous ceiling in the world under which popes are chosen to lead the faithful. One is always looking up at the masterwork of art that explains the theology of God. Later this afternoon there will be free time to relax or explore other sections of the city and enjoy dinner on your own at one of Rome’s many restaurants. 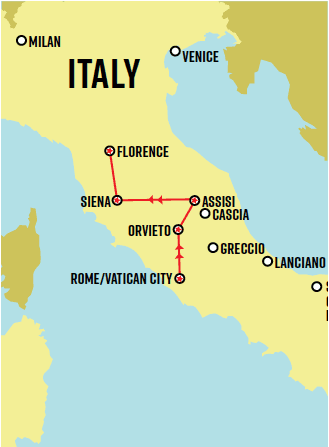