Pilgrimage to the Marian Shrines - September 2019 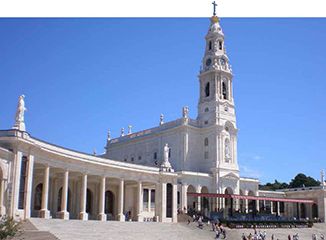 Sanctuary of Our Lady of Fatima
$4,285
per person

Your pilgrimage begins today as you depart on your flight to
Portugal.

After a morning arrival in Lisbon, you will meet your
knowledgeable local escort, who in addition to the priest
accompanying the tour, will be with you throughout your
stay. Drive north to Fatima, one of the world’s most important
Marian Shrines and an important center for pilgrimages. Time
permitting, we will make a stop in Santarem for Mass at the
Church of St. Stephen, famous for its venerated relic, “the
Bleeding Host” en route from Lisbon to Fatima.

As in most small villages in the early years of the century, As in
most small villages in the early years of the century, the parish
church was the center of life and faith in Fatima. It was here
that the three children were baptized, and Lucy made her first
confession at six years of age. The kindly priest who heard her
confession told her to consecrate herself to the Blessed Virgin
and she immediately did this in front of the statue of Our Lady
of the Rosary. The following day she took Holy Communion for
the first time. Jacinta also frequently came here to pray. Once
on the feast of the Ascension, the Blessed Virgin appeared and
asked them to pray the rosary every day and ask for world
peace. After Mass at the Chapel of the Apparitions, visit the
Basilica to see the site of Francisco and Jacinta’s graves and
the village where the three children lived. Continue to Valinhos
where Our Lady appeared to the children following their release.
This evening participate in the Stations of the Cross along the
Via Sacre, site of the first Apparition.

This morning leave Portugal for Spain. En route we will visit
Coimbra, where we will stop at the Convent of Santa Clara La
Nova where Sister Lucia lived, the final visionary who passed
away in 2005. Continue across the Portuguese-Spanish border
to Salamanca, one of Spain’s foremost cultural centers, a great
university city and a showcase of intricately sculpted Renaissance
architecture in golden stone. Visit the Plaza Mayor, which is
regarded as one of the most attractive squares in Spain, and the
Cathedrals Vieja and Nueva.

Today we will begin by journeying to Alba de Tormes to
venerate the incorrupt arm and heart of St. Theresa where they
are held at the Carmelite Convent there. From there it will be
onto her hometown, Avila, and the Convent of St. Teresa that
was built after her canonization in 1515, over the house where
she was born. Our final place of prayer is the Monastery of the
Incarnation, where St. Theresa spent much of her life, before
continuing onto Segovia for our overnight.

Today we will spend time in Segovia devoting time to another
great Carmelite, St. John of the Cross, who served as spiritual
director to St. Theresa of Avila. We will have Mass at the tomb
of St. John in the Convent named after him, also where he lived
near the end of his life. We will also have time for prayer at
the Gothic Cathedral and the Monastery of St. Joseph. Every
corner of this old town sparkles with Romanesque churches
and fine old houses. Then depart Segovia for Zaragoza for our
final pilgrimage site of the day, the Shrine of Our Lady of Pilar,
where the Blessed Virgin appeared to St. James in 40 AD.

This morning we will celebrate Mass at the Basilica of Our Lady
of the Pillar. We will then depart Zaragoza and drive to Huesca
where we will visit its Cathedral which was built in 1273 on the
ruined foundations of a mosque and is now considered to be
one of the architectural gems of northern Spain. Then cross
the Spanish-French border and continue to Lourdes, one of
the great pilgrimage shrines in the world. It was here where
Our Lady appeared to Bernadette in 1858 proclaiming herself
the “Immaculate Conception.” This evening we will participate
in the Blessed Sacrament Procession and the Candlelight
Procession.

You have all day to experience the special atmosphere of this
beautiful town. Attend Mass at the Grotto of Massabielle, visit
the Basilica of St. Pius X, see the house where Bernadette
lived during the Apparitions, and visit several of the sites
where miraculous cures have taken place. After dinner, join the
candlelight procession.

This morning we will depart Lourdes for Montserrat where we
will celebrate Mass at the Sanctuary of Our Lady of Montserrat,
the spiritual heart of Catalonia and home to a dramatically set
Benedictine monastery. For 700 years this Marian shrine has
attracted thousands of pilgrims from around the world. We will
also visit the Black Madonna of Montserrat, one of Spain’s most
fervent devotions to the Blessed Mother. The remainder of the
day will be free for exploring this spiritual site.

This morning after breakfast we will spend time in prayer
in a Holy Hour before departing from the country retreat of
Montserrat for Barcelona to have lunch and to visit Gaudi’s La
Sagrada Familia: a magnificent, unfinished Roman Catholic
basilica of impressive proportions, one of the largest and most
extravagant churches in the world, where we will celebrate
Mass and then have the rest of the day free to explore this
liturgical and architectural masterpiece.

Today we begin with Mass at Sacred Heart, a magnificent neo-
Renaissance Church built on the outskirts of Barcelona on a
hill. Down by the coast we will have time for prayer at Santa
Maria del Mar and the Barcelona Cathedral before exploring the
colorful markets of Las Ramblas. The rest of the day will be
for free time before returning to our hotel and our final night in
Spain and a celebratory farewell dinner.

After a morning at leisure we will transfer to the airport to
catch our afternoon return flight home. 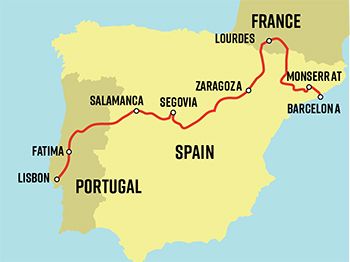 Contact Tekton Ministries to reserve your spot on this life-changing pilgrimage
"My favorite moment was seeing the wheelchairs and gurneys wheeled into the Lady of Lourdes sanctuary."
- Deacon Tom H., pilgrim from Indianapolis, IN
"The Marian focus structured our prayer, both personal and communal, and our reflection, giving room for Saint James and Saint Ignatius. The smaller group was ideal actually. By the second day we bonded and everyone knew everyone else's name. There was lots of personal sharing too over the course of the pilgrimage. Of the eight pilgrimages I have taken, this one was the most congenial and the most united and harmonious. Some of that reality was because of Pilar as well "
- Fr. John R., pilgrim from Indianapolis, IN
""Tekton took care of all details. They chose excellent hotels, well positioned to our interest points. They required very little from us once we gave them our personal information. I appreciated Richard being at the airport to help us get approved for take off. I think Tekton did a great job.” "
- Rev. James F., pilgrim from Indianapolis, IN