Go to where angels trod, the Holy Family lived and worked and the Holy Spirit came down to change the world.

Experience the Holy Land
$3,345
per person

We will take a morning drive to the top of the Mount of Olives for a panoramic view of Jerusalem and visit two churches located on the mount: the Church of Pater Noster, where Jesus taught his disciples how to pray the “Our Father,” and the Ascension Chapel, the site where Jesus ascended into Heaven. Descend the Mount on the path Christ walked on the “Palm Sunday Road” to Dominus Flevit, where Christ wept over Jerusalem and her future destruction. Then enter the Garden of Gethsemane where Christ had His agony and was betrayed. Here we have Mass in the Church of All Nations at the Rock of Agony, the very rock Christ prayed at and sweated blood before He was to be crucified. In the afternoon, we drive to Ein Karem, one of the most beautiful sites in the New City of Jerusalem where St. John the Baptist was born. Pray at the Visitation Church where Mary proclaimed her service to God in her Magnificat prayer.

An exciting and full-packed day awaits us as we explore Jerusalem further. We enter the Old City of Jerusalem through St. Stephen’s Gate to visit the Church of St. Anne, where the Blessed Virgin Mary was born. Afterwards, is the Pool of Bethesda, where Jesus healed the paralytic man. We will continue to see Pilate’s Judgement Hall, the Chapel of Flagellation, the Arch of Ecce Homo, where Pilate said, “Behold the man,” with Jesus standing before the crowds wearing His crown of thorns with His body torn after the scourging. Prayerfully, we will walk the Via Dolorosa to the Church of the Holy Sepulchre and have the opportunity to climb the steps up to Mt. Calvary and pray at the site of the Crucifixion. Venerate the site where Jesus’ body was anointed, the tomb where He was buried and rose from the dead and the Chapel of St. Helena where she found the true cross. This afternoon, we journey to Mt. Zion, where Christ celebrated the Last Supper in the Upper Room. Together we will journey to pray the Rosary at the Church of the Dormition, the traditional site where Mary was assumed into heaven. Our final stop is at one of the most striking churches in Jerusalem –St. Peter in Gallicantu– commemorating the place where Peter denied Jesus three times (Matthew 26).

We rise early today to celebrate an early morning Mass at the Tomb of Our Lord in the Holy Sepulchre Church. After a late breakfast at our hotel, we depart for Jericho, the oldest known city in the Western world. In 1250 B.C., Joshua encircled the city, trumpets blasting, and the walls came tumbling down (Joshua 6). Jesus passed through Jericho many times on His way to Jerusalem. From Jericho we ascend the Mount of Temptation, where Jesus fasted and prayed for 40 days to resist the devil. We will continue our journey to the traditional baptismal site of Jesus in the Jordan River. Renew your baptismal vows in the very river where Christ was baptized by John the Baptist (Mark 1:9). Ponder how the children of Israel crossed the River Jordan opposite Jericho when they came to the Promised Land. These are the waters the prophet Elijah divided and crossed with Elisha and which Naaman the Syrian dipped in seven times to cure his leprosy. Pilgrims come every year to immerse themselves in these holy waters. Continue our drive north though the Judean wilderness and the Jordan River Valley to Tiberias for check-in at our hotel located on the Sea of Galilee – our home for the next 4 nights.

Depart this morning from Tiberias, driving west to the sparkling port city of Haifa where we will ascend Mt. Carmel, the sacred mountain home of Elijah and Elisha. Visit the world center of the Carmelite order at their monastery and see the cave in which Elijah lived. Venerate the site where the Prophet Elijah contested 450 prophets of Baal proclaiming, “The Lord, He is God” (1 Kings 18). Then drive south along the Mediterranean Coast to Caesarea, the capital of the Roman Procurators of Judea where St. Peter preached, and St. Paul was imprisoned for two years. We will visit the Roman Theater and Crusader’s Moat and see the stunning architecture and art of the Byzantine Churches. Continue to Tel Aviv for our last night in the Holy Land.

Our time pondering the wonder and awe of the Holy Land comes to an end. We depart for the airport early this morning to catch our return flight home from Tel Aviv. 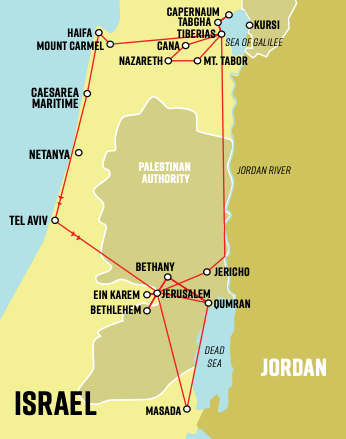 Contact Tekton Ministries to reserve your spot on this life-changing pilgrimage
"My favorite time on the pilgrimage is celebrating Mass each day. Celebrating Mass in the Grotto of the Apostles was particularly blessed and unforeseen. The manifestation of the Spirit was apparent."
- Fr. David W., pilgrim from Havana, IL
"Our guide Rami was terrific: smart, knowledgeable, flexible, kind (especially to pilgrim who had difficulty walking), adaptable, spiritual, articulate, respectful of pilgrims and priest-spiritual-director, great with schedule and timetable."
- Rev. Robert W., pilgrim from Laurel Falls, OH
"My favorite moment from the pilgrimage was visiting the Church of the Nativity in Bethlehem and, after venerating the birthplace, gathering as a group and reading the Gospel of the Nativity according to Luke. We then sang “O Holy Night”. Fantastic!"
- Fr. Michael G., pilgrim from Chesterfield, MO