Imagine the faces of those who first saw Christ at the seashore, on the mountains and in the valleys. Pray where miracles happened, and witness the places that the Bible speaks about.

Our pilgrimage begins today as we depart on our ﬂight to Israel. Meals and drinks served aloft.

Our immersion in ancient Israel where Christ walked begins. After arrival at Ben Gurion Airport in Tel Aviv we will be met by our local guide who will make the scripture come alive as we follow in the footsteps of Jesus and the Prophets. Time permitting, and based upon our flight schedule, we will proceed to Old Jaffa for Mass at St. Peter’s Church where Peter stayed when visiting this city and the House of Simon the Tanner. It was here where Peter brought Tabitha back from the dead and had a vision about broadening the ministry of Christ and bringing the message of salvation to the Gentiles (Acts 10). Later this afternoon, we will have an opportunity to walk along the winding cobblestone streets and explore the charming artists’ colony, art galleries and craft shops. Then we proceed to the resort town of Netanya where we will spend our ﬁrst night in the Holy Land on the shores of the Mediterranean. (D, Mass)

Set out for a morning drive along the Mediterranean Coast to Caesarea, the capital of the Roman Procurators of Judea where St. Peter preached and St. Paul was imprisoned for two years. We will visit the Roman Theater, Crusader’s Moat and see the stunning architecture and art of the Byzantine Churches. Continue north and visit Muhraka, where Elijah had his famous duel with the prophets of Baal (1 Kings 18). After Mass we will enter the port city of Haifa to ascend Mt. Carmel, the sacred mountain where the Prophet Elijah proclaimed, “The Lord, He is God,” and Elisha, his disciple, took refuge. We will visit Stella Maris, the church dedicated to the Blessed Virgin Mary as Star of the Sea, located near the cave in which Elijah lived. Then, make our way to Galilee, our home for the next three nights. (B, D, Mass)

This morning, we will enjoy a scenic boat ride across the Sea of Galilee and proceed to the Church of Peter’s Primacy (John 21:16). Here on the shore of Galilee, Jesus appeared to the Apostles after His Resurrection and conﬁrmed Peter in the role as Vicar of Christ with the words, “Feed My sheep.” The rock emerging from the center of the church is the actual table at which they ate breakfast. We will proceed onto Capernaum which for three years was the center of Jesus’ public ministry. Here our Lord met his ﬁrst disciples – Peter, Andrew, James, John and Matthew – and worked many miracles. He healed Peter’s mother-in-law of a fever, brought a child back to life, cured a leper, healed the centurion’s servant, cast out a demon from a young boy and healed all that were sick (Matt 8:16). We will celebrate Mass, visit the synagogue where Jesus taught, and then drive to Tabgha – the site where Jesus multiplied the Loaves and Fishes and fed over 5000 people (Luke 9:13). Next, we will drive to the Mount of Beatitudes the site of the Sermon on the Mount. This afternoon we will ascend the Golan Heights and stop at the Banias Spring that rises from under a cave and is one of the sources of the Jordan River. It was here near Banias at ancient Caesarea Philippi where Peter made his confession of faith in Jesus. (B, D, Mass)

We drive to Cana in Galilee to pray where Jesus performed his first miracle, at the request of his mother, Mary, turning the water into wine. The Catholic Church points to this miracle as establishing the Sacrament of Marriage. If you wish, you may renew your wedding vows here as a lasting remembrance of this holy site. Afterwards, travel a short distance to Nazareth, the childhood home of Jesus. Explore the Church of the Annunciation that holds the Cave of the Annunciation just behind the altar. This is the actual room where Gabriel appeared to Mary and “The Word was made flesh.” (John 1:14.). See St. Joseph’s Carpentry Shop, where the foster father of Jesus worked, and Mary’s Well, where the Virgin Mary drew water with her Son for their daily living. We will take our last excursion of the day to the summit of Mt. Tabor, the site of the Transfiguration and the culminating point of Christ’s public life. Christ revealed his divinity here to three of his apostles as he spoke with the prophets Moses and Elijah (Matthew 17). (B, D, Mass)

This morning we visit Magdala, birthplace of Mary Magdalene, known as “the Apostle to the Apostles,” where we will visit the chapel and surrounding ruins. Then, depart from the region of Galilee and travel south through the Jordan River Valley to the traditional baptismal site of Jesus in the Jordan River. Renew your baptismal vows in the very river where Christ was baptized by John the Baptist. (Mark 1:9) Ponder how the children of Israel crossed the River Jordan opposite Jericho when they came to the Promised Land. Pilgrims come every year to immerse themselves in these holy waters. Continue our journey into Jericho, the oldest known city in the Western world. In 1250 B.C., Joshua and the Israelites encircled the city, trumpets blasting, and the walls came tumbling down (Joshua 6). Jesus passed through Jericho on his way to Jerusalem. From Jericho we have an excellent view of the Mount of Temptation, where Jesus fasted and prayed for 40 days to resist the devil. We then drive to the Dead Sea to float and swim in its salty, mineral-laden waters. Proceed to Bethany to see the House of Mary, Martha, and Lazarus and the Tomb of Lazarus where Christ raised him from the dead. View the site where Jesus revealed to Martha that He is “the resurrection and the life” (John 11). Afterwards, we will continue to Jerusalem, our home for the next five nights. (B, D, Mass)

We will take a morning drive to the top of the Mount of Olives for a panoramic view of Jerusalem and visit two churches located on the mount: the Church of the Pater Noster where Jesus taught His disciples how to pray the “Our Father” and Ascension Chapel, the site where Jesus ascended into Heaven. Descend the mount on the path Christ walked on the “Palm Sunday Road” to Dominus Flevit, where He wept over Jerusalem and her future destruction. Then enter the Garden of Gethsemane where Christ had His agony and was betrayed. Here we will pray in the Church of All Nations at the Rock of Agony, the very rock Christ prayed at and sweated blood before He was crucified. In the afternoon, we drive to Ein Karem, one of the most beautiful sites in the New City of Jerusalem where St. John the Baptist was born. Marvel at the Visitation Church where Mary proclaimed her service to God in her Magnificat prayer and pray the Magnificat together in this holy site. (B, D, Mass)

An exciting day awaits us as we explore Jerusalem further. We enter the Old City of Jerusalem through St. Stephen’s Gate to visit the Church of St. Anne, where the Blessed Virgin Mary was born. Afterwards, see the Pool of Bethesda, where Jesus healed the paralytic man. Prayerfully walk the Via Dolorosa to the Church of the Holy Sepulchre and climb the steps up Mt. Calvary to pray at the site of the Crucifixion. Venerate the site where Jesus body was anointed, the tomb where He was buried and rose from the dead and the Chapel of St. Helena where she found the true cross. While in the Old City, we will also see Pilate’s Judgment Hall, the Chapel of Flagellation, the Arch of Ecce Homo, the “Wailing Wall”, and we will view the Temple Mount. Afterwards, we exit the city to visit the Pool of Siloam, where Jesus healed a man born blind. (B, D, Mass)

We begin this morning at one of the most joyous sites connected to the Holy Night Christ was born – the church located in the Shepherd’s Fields in Bethlehem, marking the spot where the shepherds heard the chorus of angels proclaiming Jesus’ birth. In the city of Bethlehem, meaning “House of Bread,” we visit the Nativity Church that sits above the traditional Grotto of Jesus’ Birth. Ponder the Manger, Grotto of St. Jerome, and the Church of St. Catherine, parish church for Bethlehem’s Catholics. We will visit the Milk Grotto Chapel, a place where many couples pray for the Virgin Mary’s intercession to conceive a child. After time for personal prayer and shopping, we return to Jerusalem, where the remainder of the day will be free for personal activities. (B, D, Mass)

This morning we travel to Mt. Zion, where Christ celebrated the Last Supper in the Upper Room and instituted the Sacrament of the Eucharist. Together we journey to pray the rosary at Dormition Abbey, the traditional site where Mary was assumed into heaven. Our final stop is at one of the most striking churches in Jerusalem –St. Peter in Gallicantu. A golden rooster sits atop, recalling the place where Peter denied Jesus three times (Matthew 26). This was the site of the palace of the high priest Caiaphas, where Jesus was brought to jail after His arrest and kept in the dungeon that sits underneath the Church. This afternoon we will drive to Abu Ghosh (Emmaus) where Jesus appeared following His Resurrection and revealed Himself to His disciples (Luke 24). We will have ample time to reflect upon our own walk with Jesus on this pilgrimage before returning to Jerusalem for our farewell dinner. (B, D, Mass) 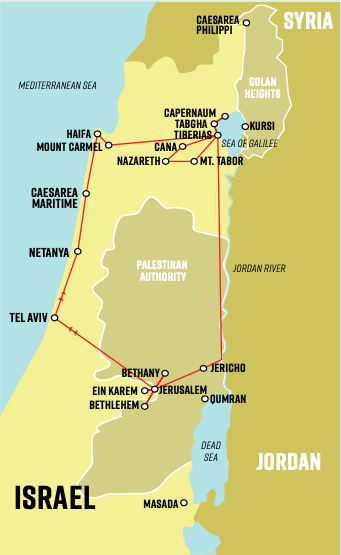 Contact Tekton Ministries to reserve your spot on this life-changing pilgrimage
"Especially, as we were in the Advent Season, the precious moments in the Church of the Nativity, venerating the site of Our Lord Jesus' entry into the world, was my favorite moment of the pilgrimage."
- Fr. Joseph K., pilgrim from Columbus, OH
"The unplanned moments were very memorable. Our group was in the Shepherd's Field church in Bethlehem. A second tour group entered the church. Our guide, Rami, knew the other guide (I think they were cousins). Soon both groups were singing Christmas hymns together. It was spontaneous and very joyful."
- Michael K, pilgrim from Lincoln, NE
"Our guide Rami was terrific: smart, knowledgeable, flexible, kind (especially to pilgrim who had difficulty walking), adaptable, spiritual, articulate, respectful of pilgrims and priest-spiritual-director, great with schedule and timetable."
- Rev. Robert W., pilgrim from Laurel Falls, OH