After early morning prayer time at the Tomb of Our Lord, we return to the hotel for breakfast. We will then visit Abu Ghosh (Emmaus) where Jesus appeared following His Resurrection. Proceed to Bethany to see the House of Mary, Martha, and Lazarus and the Tomb of Lazarus where Christ raised him from the dead. View the site where Jesus revealed to Martha that He is “the resurrection and the life” (John 11). Continue through the Judean Wilderness to Qumran to see the caves where the Dead Sea Scrolls were discovered. We then drive to the Dead Sea to float and swim in its salty, mineral laden waters before heading back to Jerusalem for some free time on our final afternoon. This evening we head to a local hotel to enjoy a traditional Middle Eastern farewell dinner. After dinner we will transfer to Ben Gurion Airport in Tel Aviv to catch our late evening return flight home.

Today we arrive back in the United States following our overnight flight from Tel Aviv. 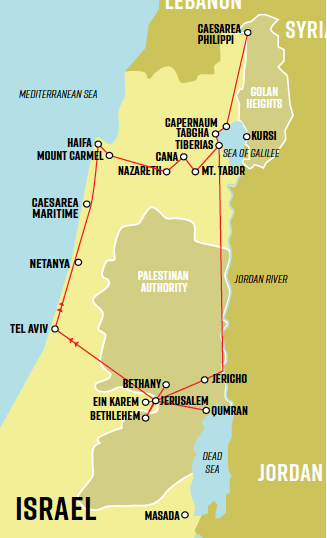 Contact Tekton Ministries to reserve your spot on this life-changing pilgrimage
"After experiencing the Holy Land where Jesus walked, whenever I hear the Gospels I will be able to picture exactly where He walked."
- Mary L., pilgrim from Lincoln, NE
"My favorite moment from the pilgrimage was visiting the Church of the Nativity in Bethlehem and, after venerating the birthplace, gathering as a group and reading the Gospel of the Nativity according to Luke. We then sang “O Holy Night”. Fantastic!"
- Fr. Michael G., pilgrim from Chesterfield, MO
"Especially, as we were in the Advent Season, the precious moments in the Church of the Nativity, venerating the site of Our Lord Jesus' entry into the world, was my favorite moment of the pilgrimage."
- Fr. Joseph K., pilgrim from Columbus, OH