Let this land become a lived experience for you. Pray where angels announced Salvation and Mary said yes, setting the course of the world’s history. 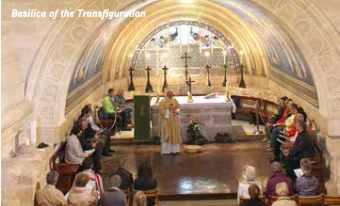 Experience the Holy Land
$3,705
per person

After arrival at Ben Gurion Airport in Tel Aviv, our immersion in ancient Israel where Christ walked begins. We will be met by our guide who will guide us through the Holy Land and make the scripture come alive as we follow in the footsteps of Jesus. Stay overnight in the Mediterranean city of Netanya. (D)

Set out for a morning drive along the Mediterranean Coast to Caesarea, the capital of the Roman Procurators of Judea where St. Peter preached and St. Paul was imprisoned for two years. Visit the Roman Theater, Crusader’s Moat and see the stunning architecture and art of the Byzantine Churches. Continue north and visit Muhraka, where Elijah had his famous duel with the prophets of Baal (1 Kings 18). We then enter the port city of Haifa to ascend Mt. Carmel, the sacred mountain where the Prophet Elijah contested 450 prophets of Baal proclaiming, “The Lord, He is God,” and Elisha, his disciple, took refuge. Visit Stella Maris, the church dedicated to the Blessed Virgin Mary as Star of the Sea. It sits near the cave in which Elijah lived. This afternoon, we drive to Cana in Galilee to pray where Jesus performed His first miracle, at the request of His mother, Mary, turning the water into wine. The Catholic Church points to this miracle as establishing the Sacrament of Marriage. If you wish, you may renew your wedding vows here as a lasting remembrance of this holy site. Proceed to our hotel in Galilee, our home for the next three nights. (B, D, Mass)

Following breakfast, we travel a short distance to Sepphoris, the former capital of Galilee, and potentially the building site where St. Joseph worked. Continue to Nazareth, the boyhood home of Jesus. Visit the Basilica of the Annunciation that holds the Cave of the Annunciation which is the actual room where Gabriel appeared to Mary and “the Word was made flesh.” (John 1:14). See St. Joseph’s Carpentry Shop, where the foster father of Jesus worked and Mary’s Well, where the Virgin Mary drew water with her son for their daily living. Later, we journey to the summit of Mt. Tabor, the site of the Transfiguration and the culminating point of Christ’s public life. Christ revealed his divinity here to three of his apostles as he spoke with the prophets Moses and Elijah. It is also the second time and place where God told people from Heaven that Christ was his beloved Son to whom they should listen. (Matthew 17:5) Our last site of this grace-filled day is the Mount of Beatitudes where Christ gave his famous Sermon on the Mount. We will have time for personal prayer and reflection here, along the shores of the Sea of Galilee. (B, D, Mass)

Enjoy a scenic morning boat ride across the Sea of Galilee, the setting of many moments in Christ’s life. We will visit the Church of Peter’s Primacy on the shores of Galilee. A rock at the center of the Church is believed to be the actual table where the apostles ate breakfast with Christ after His Resurrection. It is where Peter’s role as the Vicar of Christ was further established as Christ asked him to “Feed my sheep” (John 21:16). We continue to Capernaum – the center of Jesus’s three-year public ministry where he called his first disciples, Peter, Andrew, James, John and Matthew. Here, Christ healed Peter’s mother-in-law of a fever, brought a child back to life, cured a leper, healed the centurion’s servant and cast out a demon from a young boy. We will visit the synagogue where Jesus taught and proceed to Tabgha, where we ponder the site where Jesus multiplied the loaves and fish to feed more than 5,000 people. we will ascend the Golan Heights and stop at the Banias Spring, a waterfall that rises from under a cave and one of the sources of the Jordan River. It was here in Banias (known in Biblical times as Caesarea Philippi) where Peter made his confession of faith in Jesus as the Messiah and where Jesus gave Peter his new name, declaring him the Rock upon which He would build His Church (Matthew 16:16-19). (B, D, Mass)

We begin this morning by checking out at our hotel and driving to Magdala, birthplace of St. Mary Magdalene, known as “the Apostle to the Apostles,” where we will visit the chapel and surrounding ruins. From there we will travel around the Sea of Galilee and stop at Kursi, where Jesus cast out a legion of demons into a herd of swine (Luke 8:26). Continue our drive south through the Jordan River Valley to the traditional baptismal site of Jesus. Renew your baptismal vows in the very river where Christ was baptized by John the Baptist. (Mark 1:9). Ponder how the children of Israel crossed the River Jordan opposite Jericho when they came to the Promised Land. These are the waters the prophet Elijah divided and crossed with Elisha and which Naaman the Syrian dipped in seven times to cure his leprosy. Pilgrims come every year to immerse themselves in these holy waters. Continue through the Judean wilderness to Jericho, the oldest known city in the Western world. In 1250 B.C., Joshua encircled the city, trumpets blasting, and the walls came tumbling down (Joshua 6). From the top of the ancient “tel”, we’ll have an excellent view of Elisha’s Fountain, the Qarantal and the Mount of Temptation, where Jesus fasted and prayed forty days to resist the devil. Proceed to Jerusalem, our home for the next five nights. (B, D, Mass)

We will take a morning drive to the top of the Mount of Olives for a panoramic view of Jerusalem and visit two churches located on the mount: the Church of the Pater Noster where Jesus taught His disciples how to pray the “Our Father” and Ascension Chapel, the site where Jesus ascended into Heaven. Descend the mount on the path Christ walked on the “Palm Sunday Road” to Dominus Flevit, where He wept over Jerusalem and her future destruction. Then enter into the Garden of Gethsemane where Christ had His agony and was betrayed. Here we will pray in the Church of All Nations at the Rock of Agony, the very rock Christ prayed at and sweated blood before He was crucified. In the afternoon, we drive to Ein Karem, one of the most beautiful sites in the New City of Jerusalem where St. John the Baptist was born. Marvel at the Visitation Church where Mary proclaimed her service to God in her Magnificat prayer and pray the Magnificat together in this holy site. (B, D, Mass)

An exciting day awaits us as we explore Jerusalem further. We enter the Old City of Jerusalem through St. Stephen’s Gate to visit the Church of St. Anne, where the Blessed Virgin Mary was born. Afterwards, see the Pool of Bethesda, where Jesus healed the paralytic man. Prayerfully walk the Via Dolorosa to the Church of the Holy Sepulchre and climb the steps up Mt. Calvary to pray at the site of the Crucifixion. Venerate the site where Jesus body was anointed, the tomb where He was buried and rose from the dead and the Chapel of St. Helena where she found the true cross. This afternoon we travel to Mt. Zion, where Christ celebrated the Last Supper in the Upper Room and instituted the Sacrament of the Eucharist. Together we journey to pray the rosary at Dormition Abbey, the traditional site where Mary was assumed into heaven. Our final stop is at one of the most striking churches in Jerusalem –St. Peter in Gallicantu. A golden rooster sits atop, recalling the place where Peter denied Jesus three times (Matthew 26). This was the site of the palace of the high priest Caiaphas, where Jesus was brought to jail after His arrest and kept in the dungeon that sits underneath the Church. (B, D, Mass)

Journey to one of the most joyous sites connected to the Holy Night Christ was born – the Shepherd’s Fields outside of Bethlehem. Then travel into the city of Bethlehem and visit the Nativity Church above the traditional Grotto of Jesus’ Birth. Ponder the Manger, Grotto of St. Jerome, and the Church of St. Catherine, the parish church for Bethlehem’s Catholics. We will visit the Milk Grotto Chapel, a place where many couples pray for the Virgin Mary’s intercession to conceive a child. After some free time for further personal exploration and shopping, we return to Jerusalem. (B, D, Mass)

We start the morning at the Tomb of Our Lord in the Holy Sepulchre Church with time for private prayer and reflection. After a late breakfast, we will visit Bethany to see the House of Mary, Martha, and Lazarus and the Tomb of Lazarus where Christ raised him from the dead. View the site where Jesus revealed to Martha that He is “the resurrection and the life” (John 11). Continue through the Judean Wilderness to Qumran to see the caves where the Dead Sea Scrolls were discovered. We then drive to the Dead Sea to float and swim in its salty, mineral laden waters before heading back to Jerusalem for some free time on our final afternoon. This evening we head to a local hotel to enjoy a traditional Middle Eastern farewell dinner. (B, D, Mass) 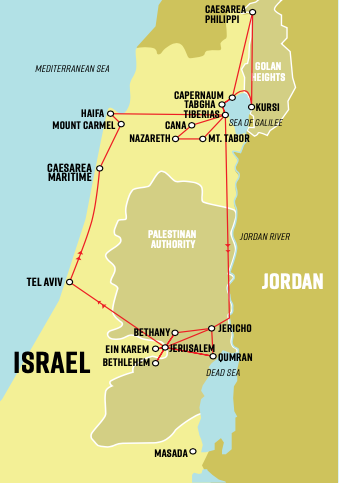 Contact Tekton Ministries to reserve your spot on this life-changing pilgrimage
"Especially, as we were in the Advent Season, the precious moments in the Church of the Nativity, venerating the site of Our Lord Jesus' entry into the world, was my favorite moment of the pilgrimage."
- Fr. Joseph K., pilgrim from Columbus, OH
"After experiencing the Holy Land where Jesus walked, whenever I hear the Gospels I will be able to picture exactly where He walked."
- Mary L., pilgrim from Lincoln, NE
"My favorite time on the pilgrimage is celebrating Mass each day. Celebrating Mass in the Grotto of the Apostles was particularly blessed and unforeseen. The manifestation of the Spirit was apparent."
- Fr. David W., pilgrim from Havana, IL