Connect with the person of Jesus Christ. Find out why it is so important to be physically present in the places he lived, walked and preached the words of the Gospel.

A Truly Catholic Pilgrimage
$2,785
per person

After early morning prayer time at the Tomb of Our Lord, we return to the hotel for breakfast. We will then visit Abu Ghosh (Emmaus) where Jesus appeared following His Resurrection. Proceed to Bethany to see the House of Mary, Martha, and Lazarus and the Tomb of Lazarus where Christ raised him from the dead. View the site where Jesus revealed to Martha that He is “the resurrection and the life” (John 11). Continue through the Judean Wilderness to Qumran to see the caves where the Dead Sea Scrolls were discovered. We then drive to the Dead Sea to float and swim in its salty, mineral laden waters before heading back to Jerusalem for some free time on our final afternoon. This evening we head to a local hotel to enjoy a traditional Middle Eastern farewell dinner. After dinner transfer to Ben Gurion Airport in Tel Aviv to catch our late evening return flight home.

Today we arrive back in the United States following our overnight flight from Tel Aviv, bring with us all of the graces and blessings of this pilgrimage. 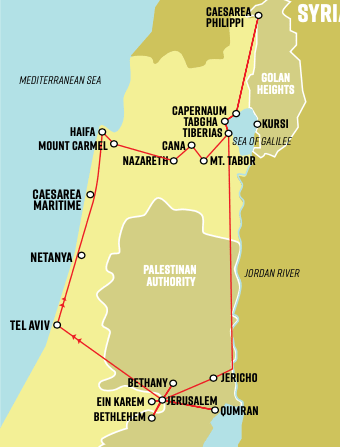 Contact Tekton Ministries to reserve your spot on this life-changing pilgrimage
"My favorite time on the pilgrimage is celebrating Mass each day. Celebrating Mass in the Grotto of the Apostles was particularly blessed and unforeseen. The manifestation of the Spirit was apparent."
- Fr. David W., pilgrim from Havana, IL
"My favorite moment from the pilgrimage was visiting the Church of the Nativity in Bethlehem and, after venerating the birthplace, gathering as a group and reading the Gospel of the Nativity according to Luke. We then sang “O Holy Night”. Fantastic!"
- Fr. Michael G., pilgrim from Chesterfield, MO
"The unplanned moments were very memorable. Our group was in the Shepherd's Field church in Bethlehem. A second tour group entered the church. Our guide, Rami, knew the other guide (I think they were cousins). Soon both groups were singing Christmas hymns together. It was spontaneous and very joyful."
- Michael K, pilgrim from Lincoln, NE