Pilgrimage to the Holy Land - April 2019

A pilgrimage to the Holy Land is more than a religious tour. It is an experience of faith, a voyage to deepen one’s desire to know Christ better. It is turning to the places “in which God has chosen to ‘pitch his tent,’ among us,” as St. John Paul II said about his own pilgrimage to the Holy Land. Enter into the sacred spaces of the Annunciation of Mary. See the place of Christ’s birth. Follow the steps Simon of Cyrene took to help Christ carry his cross and of his Apostles who witnessed his first miracles. Journey with us to the land where Christ prayed, suffered, and rose from the dead. 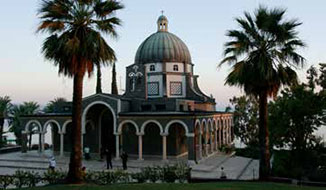 Mount of Beatitudes
Feature Call Out
$3,620
per person

Our pilgrimage begins today as we depart on our flight to Israel.
Meals and drinks will be served aloft.

Upon arriving at Ben Gurion Airport in Tel Aviv, we will be met
by our local guide, who will arrange the schedule of our visits,
and make the Scriptures come alive for us as we follow in the
footsteps of Jesus, the Apostles and the Prophets. Transfer to
our hotel in Netanya.

This morning we will depart Netanya and drive north along
the Mediterranean coast to Caesarea, the capital of the ancient
Roman Procurators of Judea where St. Peter preached and
St. Paul was imprisoned for two years. Here we will visit the
Roman Theater, Crusader’s Moat, and the Byzantine Churches.
We continue on to the sparkling port city of Haifa where we
will ascend Mt. Carmel, home of the prophets Elijah and Elisha.
After celebrating Mass at Stella Maris we will continue on to
our hotel located on the shores of the Sea of Galilee in the town
of Tiberias, our home for the next three nights.

This morning, we will enjoy a scenic boat ride across the Sea
of Galilee and proceed to the Church of Peter’s Primacy (John
21:16). Here on the shore of Galilee, Jesus appeared to the
Apostles after His Resurrection and confirmed Peter in the role
as Vicar of Christ with the words, “Feed My sheep.” The rock
emerging from the center of the church is the actual table at
which they ate breakfast. We will proceed on to Capernaum,
which for three years was the center of Jesus’ public ministry.
Here our Lord met his first disciples – Peter, Andrew, James,
John and Matthew – and worked many miracles. He healed
Peter’s mother-in-law of a fever, brought a child back to life,
cured a leper, healed the centurion’s servant, cast out a demon
from a young boy and healed all that were sick (Matt 8:16). We
will celebrate Mass, visit the synagogue where Jesus taught,
and then drive to Tabgha – the site where Jesus multiplied the
Loaves and Fishes and fed over 5000 people (Luke 9:13). Next,
we will drive to the Mount of Beatitudes, the site of the Sermon
on the Mount. We will end with a visit to Magdala, home of
Mary Magdalene, before returning to our hotel.

Following breakfast, we will drive to Cana, where Jesus
performed His first miracle, changing water into wine at the
wedding feast. Married couples will have the opportunity to
renew their wedding vows at this holy site. Then we proceed
to Nazareth, the boyhood home of Jesus. In the Church of the
Annunciation we will celebrate Mass. Just behind the altar,
at the Cave of the Annunciation, we will see the actual room
in which Mary said “yes” to the angel Gabriel. From there we
will visit St. Joseph’s Carpentry Shop and Mary’s well. In the
afternoon, we will take an excursion to the summit of Mt. Tabor
where Jesus transfigured himself and revealed his Divine Glory
to the Apostles (Matt 17:2).

This morning we will depart Tiberias and travel south through
the Jordan valley to the traditional baptismal site on the River
Jordan to renew our baptismal vows. The Bible tells us that the
Children of Israel crossed the River Jordan opposite Jericho
when they came into the Promised Land. The prophet Elijah
divided its waters and crossed with Elisha on dry land. Naaman
the Syrian dipped in the waters seven times and was cured of
his leprosy. And Jesus was baptized by John in the Jordan
(Mark 1:9). Each year, pilgrims from far and wide come to the
Place of Baptism to immerse themselves in these holy waters.
From here, we will visit ancient Jericho, the oldest known
city in the Western world. In 1250 B.C., Joshua encircled the
city and at the blast of the priests’ trumpets, the walls came
tumbling down (Joshua 6). Many times Jesus passed through
this city on his way to Jerusalem. The sycamore fig, the tree
which Zacchaeus climbed in order to catch a glimpse of Jesus,
still grows in this area. From the ruins of ancient Jericho,
we will ascend the Mount of Temptation where Jesus fasted
and prayed forty days to resist the devil. We continue on to
Jerusalem, our home for the next five nights.

This morning we will celebrate an early morning Mass at the
Church of the Holy Sepulcher. After Mass, we will return to our
hotel for breakfast. Afterwards, we will drive to Bethlehem and
celebrate Mass in the Grotto of St. Jerome. Above the traditional
Grotto of Jesus’ birth, we will visit the Nativity Church, built by
the Emperor Constantine in the 4th century. Also we will tour
the Manger, the Church of St. Catherine, the Milk Grotto Chapel
and the Shepherd’s Fields before returning to Jerusalem. The
afternoon will be free for personal devotions.

This morning we will enter the Old City of Jerusalem through
St. Stephen’s Gate to visit the Church of St. Anne, where the
Blessed Virgin Mary was born. Next to this site is the Pool of
Bethesda, where Jesus healed the paralytic man. We will then
walk the Via Dolorosa, finishing prayerfully in the Church of the
Holy Sepulcher where we will have Holy Mass. There we will
climb Mt. Calvary and pray at the site of the crucifixion. We will
venerate the site where Jesus’ body was anointed, the tomb
where he was buried and rose from the dead, and the Chapel
of St. Helena where the true cross was found. While in the
Old City, we will also see Pilate’s Judgment Hall, the Chapel of
Flagellation, the Arch of Ecce Homo, the “Wailing Wall”, and the
Temple Mount. Afterwards, we exit the city to visit the Pool of
Siloam, where Jesus healed a man born blind. We then go to
Mount Zion to visit the Church of St. Peter in Gallicantu and the
Upper Room, the site where Jesus celebrated the Last Supper.
Last, we pray our Rosary together in the Church of Dormition,
where Mary was assumed into heaven.

We will drive to Bethany to visit the site of the House of Mary,
Martha & Lazarus and the Tomb of Lazarus. Then we drive
down along the Dead Sea to Masada where we will make
an exciting ascent by cable car to this last stronghold of the
Jewish Zealots in their war against the Romans in 73 A.D. Then
we proceed to Qumran to see the caves where the Dead Sea
Scrolls were discovered. On our return to Jerusalem, we stop
at the Dead Sea for a short swim in its salty, mineral-laden
waters for those interested.

This morning we will celebrate Palm Sunday. Join fellow
pilgrims from across the world in the Palm Sunday Procession
from Bethphage to St. Anne’s Church as we follow Jesus’
triumphal entrance into Jerusalem. The procession takes us
along the same route that Jesus walked and is lined by people
with palm branches. We will be among thousands who make
their way up to the Mount of Olives. In the afternoon, we will
drive to Ein Karem, birthplace of St. John the Baptist, to visit the
Church of St. John the Baptist, and the Church of the Visitation,
where Mary proclaimed her famous “Magnificat” when she
came to visit her cousin Elizabeth.

Today our Holy Land pilgrimage comes to an end. We will
transfer to the airport in Tel Aviv for our return flight home. 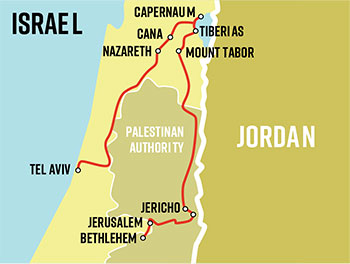 Contact Tekton Ministries to reserve your spot on this life-changing pilgrimage
"My favorite time on the pilgrimage is celebrating Mass each day. Celebrating Mass in the Grotto of the Apostles was particularly blessed and unforeseen. The manifestation of the Spirit was apparent."
- Fr. David W., pilgrim from Havana, IL
"I am a middle school teacher who teachers Social Studies and Theology, the pilgrimage has given me renews passions and ideas for reaching teenage students."
- Melissa Z., pilgrim from Omaha, NE
"The unplanned moments were very memorable. Our group was in the Shepherd's Field church in Bethlehem. A second tour group entered the church. Our guide, Rami, knew the other guide (I think they were cousins). Soon both groups were singing Christmas hymns together. It was spontaneous and very joyful."
- Michael K, pilgrim from Lincoln, NE