Retreat Days in Jerusalem and Galilee

Immerse yourself in the land of Jesus and the Apostles and visit some of the holiest places of Catholicism.  During this unique retreat experience, enjoy prayerful time along the shores of the Sea of Galilee, in the Garden of Gethsemane, and in the empty tomb of our Risen Lord. Reflect upon the love of God and his Son as you walk where Jesus walked and contemplate His presence in your life today.

Our Holy Land retreat begins today as we depart on our flight to Israel. Meals and drinks served aloft.

After our morning arrival at Ben Gurion Airport in Tel Aviv, our immersion in ancient Israel where Christ walked begins. Drive along the Mediterranean Coast to Caesarea, the capital of the Roman Procurators of Judea where St. Peter preached, and St. Paul was imprisoned for two years. Visit the Roman Theater and Crusader’s Moat and see the stunning architecture and art of the Byzantine Churches. Then journey to the summit of Mt. Tabor, the site of the Transfiguration and the culminating point of Christ’s public life. Christ revealed His divinity here to three of His Apostles as He spoke with the prophets Moses and Elijah and where God spoke from Heaven declaring Christ was His beloved Son to whom they should listen (Matthew 17:5). Afterwards make our way to Galilee – our home base for the next five nights.

We begin this morning at the Yardenit baptismal site, where we will renew our baptismal vows in the very river where Christ was baptized by John the Baptist (Mark 1:9). Afterwards, travel around the Sea of Galilee and stop at Kursi, where Jesus met a possessed man and cast out a legion of demons into a herd of swine (Luke 8:26). Continue on to visit ongoing excavations at the Sussita (Hippos) National Park – where ancient mosaics depicting Biblical miracles have been unearthed. Later this afternoon, we sail upon the Sea of Galilee with ample time to reflect upon Jesus’ life and ministry in this area. We will return to the other side of the sea for an evening of reflection & prayer.

We begin this morning in Magdala, birthplace of Mary Magdalene, known as “the Apostle to the Apostles,” where we have time for prayerful reflection as we visit the chapel and surrounding ruins. We then depart from the region of Galilee and travel south through the Jordan River Valley. Ponder how the children of Israel crossed the River Jordan opposite Jericho when they came to the Promised Land. These are the waters the prophet Elijah divided and crossed with Elisha and in which Naaman the Syrian dipped seven times to cure his leprosy. On our way to Jerusalem, we pass by Jericho, the oldest known city in the Western world. In 1250 B.C., Joshua and the Israelites encircled the city, trumpets blasting, and the walls came tumbling down (Joshua 6). Jesus Himself passed through Jericho on his way to Jerusalem. From the road view the Mount of Temptation, where Jesus fasted and prayed for 40 days to resist the devil. Continue through the Judean Wilderness along the road Jesus mentioned in his parable of the Good Samaritan on our day in Jerusalem, our home for the next five nights.

We will take a morning drive to the top of the Mount of Olives for a panoramic view of Jerusalem and visit the Church of the Pater Noster where Jesus taught his disciples how to pray the “Our Father.” Descend the mount on the path Christ walked on the “Palm Sunday Road” to Dominus Flevit, where Christ wept over Jerusalem and her future destruction. Then enter into the Garden of Gethsemane where Christ had his agony and was betrayed. Keep watch with Christ and pray in the Church of All Nations at the Rock of Agony, the very rock where Christ prayed and sweated blood before he was to be crucified. In the afternoon, we drive to Ein Karem, one of the most beautiful sites in the New City of Jerusalem where St. John the Baptist was born. Pray at the Visitation Church where Mary proclaimed her service to God in her Magnificat prayer. Journey a short distance to the Monastery of St. John in the Desert, where Zechariah and Elizabeth fled and found refuge during the time of Herod’s massacre of the innocents. This evening, we will spend a Holy Hour in prayer together. (B, D, Mass) 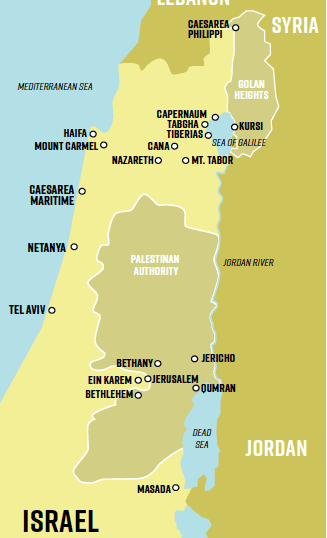