The Passion Play, Germany and Prague 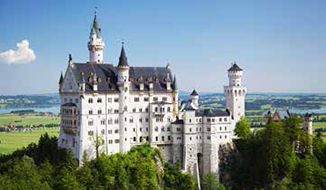 Our pilgrimage begins today as we depart on our flight to Germany. Meals and drinks served aloft.

After arrival in Frankfurt, we will meet our tour manager and then board our motor coach and drive to Rudesheim for overnight. The balance of the day will be free.

This morning take a cruise on the Rhine River. Visit Rheinfels Castle, the largest, and one of the most magnificent castles ruins on the Rhine. Also, see the Basilica of St. Martin, the main Catholic church in the city of Bingen. Afterward, we’ll tour the Benedictine Abbey at Eibingen. Here we learn about Saint Hildegaard of Bingen, also a composer and poet. But it’s only recently that her songs, writings, and remarkable life and visions have been rediscovered. After Mass, return to our hotel in Rudesheim.

This morning we drive to Heidelberg where we will stroll through the historic city center’s Gothic streets. We’ll see Heidelberg Castle, the symbolic heart of the city; Alte Brucke, a beautiful 18th-century bridge; The Altstadt (Old Town), Church of the Holy Ghost and the Jesuitenkirche. Then drive to Augsburg for our overnight stay.

This morning we will depart for the village of Oberammergau, home to the world-famous Passion Play. Today will be the highlight of our tour as we witness the Passion Play performed by the local people of Oberammergau. The story of Oberammergau is one of faith and began with a miracle. In the 1600’s the “Black Plague” swept through Europe, striking down one in every three people and leaving in its wake, misery, panic, and death. The people of Oberammergau prayed to be spared, vowing that they would present a play depicting the Life and Passion of Jesus Christ every ten years. True to their word, the villagers performed their Passion Play in 1634 and have kept their pledge, the routine of plays only having been interrupted by two World Wars.

This morning we will depart Oberammergau and drive to visit the Wieskirche (Church of the Meadow) which is considered to be the most beautiful Rococo church in Europe. We will then see Neuschwanstein which is one of the fairytale castles built by King Ludwig II. Lastly, drive to the Dachau Concentration Camp, the first of the Nazi concentration camps opened in Germany, intended to hold political prisoners. Then drive near Munich, our home for the next three nights.

Today we will celebrate Mass and then have the balance of the day free to explore the famous Oktoberfest festivities. Visit one of the festive beer tents and celebrate the closing of the celebration or walk around the Old Town. Dinner will be on your own at one of the many Old Town restaurants.

This morning drive to Erding, site of the famous Eucharistic miracle from 1417, dedicated to the Most Precious Blood. Return to Munich where we will visit the historic Glockenspiel on the Marienplatz, and the revered twin-towered Frauenkirche, the most familiar landmark of old Munich, the Burgersaal Church, and the Michaelskirche.

Depart Munich and drive to the Shrine of Our Lady of Altotting, also known as the Chapel of Grace, which is the oldest Marian shrine in Germany. The shrine became a popular pilgrim destination in 1489 after a young boy who had drowned had a miraculous recovery after his mother laid his body before the image and prayed to the Blessed Mother for a miracle. After Mass in Altotting, we will continue across the German-Czech border and continue our scenic drive through the countryside to the Czech capital of Prague, one of Europe’s most attractive cities.

Today we will enjoy a full day tour of Prague, starting with a visit to Loreto Shrine, one of the most important pilgrimage shrines in the Czech Republic. Then visit Prague Castle where we will visit St. Vitus Cathedral, St. George’s Basilica, the picturesque Golden Lane, the Royal Palace, and St. George’s Convent. Then proceed to Mala Strana, “the Little Quarter,” with its beautiful architectural buildings. Here we will visit the Church of St. Nicholas and then the Church of Our Lady Victorious where we will see the famous statue of the Infant Jesus of Prague and celebrate Mass.

This morning we will cross the Charles Bridge to visit the Old Town, which is considered to be one of the best historic city centers in Europe. Visit the Old Town Square, the Town Hall with its famous Astronomical Clock which comes alive when the hour strikes and the twelve disciples appear to bless the crowd, and the Church of Our Lady before Tyn. The remainder of the day is free for personal activities.

This morning transfer to the airport to catch our return flight home. 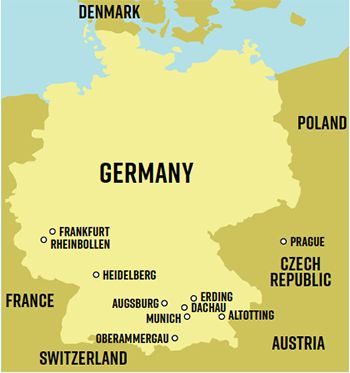