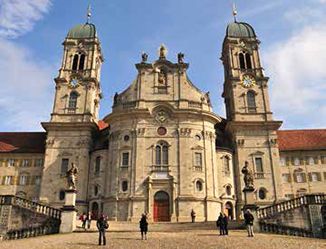 Postponed
Monastery of Einsiedeln
Experience the Passion Play
$4,335
per person

Depart today on our overnight flight to Zürich. Meals and refreshments will be served aloft.

After arrival in Zürich, we will meet our tour manager and then board our motor coach and take a scenic drive to Lucerne, one of the most beautiful cities in Europe. The rest of the day is free to discover this fascinating city on our own.

This morning we’ll enjoy a sightseeing tour of the medieval city center with its historical and picturesque old houses, churches, world-famous wooden bridges, towers, fountains, and narrow streets. Then, we will depart Lucerne and drive to Einsiedeln, the most famous pilgrimage destination in Switzerland. Visit the Benedictine Monastery of Einsiedeln whose name derives from the German word Einsiedler, or hermits. Among these was the famous Meinrad who, in the early 9th century, retired to the forest with a little statue of the Madonna which was given to him by a local abbess. Since the early 10th century, Einsiedeln has remained a place of fervent pilgrimage, and the famous Black Madonna statue is found in the Mercy Chapel. We will celebrate Mass at the Monastery, which is situated amidst green pastures and dense forests. Then cross the Swiss/Austrian border and drive to Innsbruck, one of the most attractive cities of Alpine Europe located in a lovely spot at the foot of the Karwendel Alps.

Today will be the highlight of our tour as we depart for the village of Oberammergau to witness the Passion Play performed by the local villagers. The story of Oberammergau is one of faith and began with a miracle. In the 1600’s the “Black Plague” swept through Europe, striking down one in every three people and leaving in its wake, misery, panic, and death. The people of Oberammergau prayed to the Lord, vowing they would present a play depicting the Life and Passion of Jesus Christ every ten years if their village was spared. True to their word, they first performed the Passion Play in 1634 and have kept their pledge for nearly 400 years since.

This morning, visit the ‘Wieskirche’ (Church of the Meadow) also called the Church of the Scourged Redeemer, considered to be the most beautiful Rococo church in Europe. Drive on to Munich, where we will visit the Old Town. We’ll see the historic Glockenspiel on the Marienplatz, and the revered twin-towered Frauenkirche, the most familiar landmark of old Munich. Proceed on to Altôtting for overnight.

This morning visit Altôtting Shrine, which is Germany’s most significant pilgrimage site for the veneration of St. Mary. In the Miraculous Image Chapel in Altôtting the first recorded miracle occurred in 1489 when a desperate mother laid the dead body of her drowned child before the statue of Our Lady and the child became alive. Ever since this little village has been growing as a spiritual shrine for millions of pilgrims. After Mass in Altotting, we will continue across the Austrian-German border and then stop in Maria Plain, which has been a famous pilgrimage site since the 17th century. We will then drive a short distance to Salzburg and visit the beautiful gardens of Hellbrunn Palace, a 17th Century castle known primarily for its trick fountains that spray unsuspecting walkers with water. Transfer to our hotel in Salzburg.

Stroll through the heart of old Salzburg and visit Mozart’s birthplace, the famous Horse Fountain, the Hohen Salzburg Fortress and the modern Festival Hall. Visit the religious heritage of this town including the 17th-century Cathedral, Nonnberg Convent, founded by St. Rupert in the 8th Century, and the Benedictine Abbey of St. Peter, also founded by St. Rupert. Continue to Vienna for overnight.

Today we will enjoy a full day in Vienna, exploring the Catholic heritage of this beautiful city by visiting Karlskirche, Peterskirche, and the famous Stephansdom Cathedral. Our sightseeing today will include a special visit to Schönbrunn Palace which is one of the most celebrated cultural monuments in the Austrian Empire. The gardens and elaborately decorated rooms rival Versailles. Tour the Old Town and enjoy the sights as we drive along the Ringstrasse.

This morning we will depart Vienna for a stop in Bratislava, the historic capital of Slovakia. Visit Bratislava Castle (outside view only), the Old Town, Michael’s Gate, and the Cathedral of St. Martin. Continue our scenic journey into Budapest, the capital of Hungary, which straddles the Danube River. The Buda Hills rise on one side of the river, housing the city’s ancient past. Pest is on the other side, modern and inviting. The two are linked with a series of elegant bridges.

Today we will spend the whole day exploring the sights of Budapest. Visit Hero’s Square, one of the largest and most inspiring spaces in the city, with its towering stone column and statue of the Archangel Gabriel. Pass by the Parliament, the massive, neo-Gothic building that stands majestically on the Danube. Then proceed to St. Stephen’s Cathedral where we will celebrate Mass. Discover the magic of Fishermen’s Bastion, with seven stone towers overlooking the famous river, and the distinctive Castle District with St. Mathias Church.

This morning we transfer to the airport in Budapest for our return flight home. 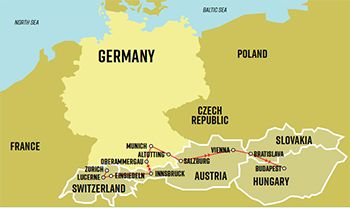