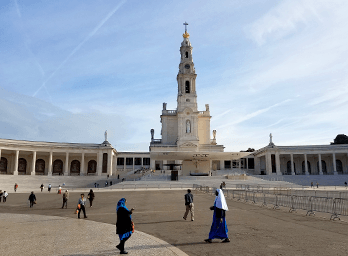 Our pilgrimage begins as we depart on our overnight flight to France. Meals and refreshments will be served aloft.

Upon arrival in Pau we will be welcomed by our local tour manager and transfer to our hotel in Lourdes, one of the most famous Marian Shrines in the world, where the Virgin Mary appeared to St. Bernadette in 1858. It is also where the Blessed Mother introduced herself as the “Immaculate Conception.” Join hundreds of other pilgrims this evening in the Blessed Sacrament and Candlelight Procession, which has been a devotional staple here since 1863. Return to our hotel for the first of three nights in this peaceful setting.

Bask in the grace of Lourdes all day as we have Mass at the Grotto of Massabielle, where Our Lady first appeared to St. Bernadette and had her dig for the spring that is now known across the world for its many miracles of healing. We visit the Basilica of St. Pius X, a massive underground concrete church. We also visit the humble home where St. Bernadette lived during the apparitions. Tonight, we join the candlelight procession in prayer and song once again.

Enjoy a full day on your own in the peaceful setting of Lourdes. Visit a place we saw yesterday, explore somewhere new, or just sit in awe and wonder and contemplate the events that happened here and the miracles that still occur. Participate one last time in the evening pilgrim activities.

After breakfast, we depart Lourdes, crossing the border into Spain and arriving in Loyola, the birthplace of St. Ignatius of Loyola, founder of the Jesuits. Here, we will see the 17th-century Basilica dedicated to St. Ignatius and his family home behind the sanctuary. Pray in the venerated room where Ignatius, at age 30, was brought following his serious wounding at the Battle of Pamplona and experienced his great conversion. This afternoon, we journey to Burgos, the historic capital of Old Castile, where we will check into our hotel for dinner and overnight.

Today we will enjoy a morning tour of Burgos including visits to the 14th century city gate known as the Arco de Santa Maria and the Monasterio de las Huelgas founded in 1180 with renovations and additions from nearly every major European architectural style. Pray in the vast limestone cathedral dedicated to our Blessed Mother – Spain’s only cathedral to have received the UNESCO World Heritage designation. Explore the Miraflores Charterhouse, the Carthusian monastery housing the tombs of Spanish kings and queens, along with other treasures of the church. Journey to the historic city of Oviedo this afternoon for check in and dinner at our hotel.

This morning attend public Sunday Mass at the Cathedral of Oviedo – San Salvador – an important spot in the history of the Camino de Santiago. It was from here that the King of Asturias, Alfono the Chaste, set out to venerate the relics of St. James in Santiago, thus becoming the first recorded pilgrim to do so and establishing the “Camino Primitivo,” or “Original Way.” The Cathedral is home to the sudariuam, or burial face cloth of Jesus, and numerous other Catholic treasures. This afternoon, set off for Santiago de Compostela, stopping at the top of the Monte de Gozo (Mount of Joy) where pilgrims would catch their first glimpse of the spires of the cathedral. Upon arrival at Monte de Gozo, there will be an option for those with the stamina to walk the last three or so miles along the Camino to the Cathedral of Santiago de Compostela.

Today we will enjoy a complete tour of Santiago de Compostela. Visit the impressive Cathedral which is considered to be one of the finest pieces of architecture in Europe. Climb down the stairs behind the altar to visit the crypt, where a silver urn contains the relics of St. James, then climb up the other set of stairs to the statue of St. James, worn in places by the hugs of millions of pilgrims given in gratitude for a successful Camino. See the Portico de la Gloria (Gateway to Heaven), an unparalleled masterpiece. Walk to the top of the Cathedral for a panoramic view of this glorious city. We will also visit the museum in the cloister adjoining the Cathedral. Enjoy a second evening in this charming Galician city.

Depart Santiago de Compostela and drive south to cross the border into Portugal. Continue on to Braga which contains over 300 churches and is the religious center of Portugal. Our pilgrimage here will include visits to Braga’s Sé Cathedral which is the oldest in Portugal and the Bom Jesus do Monte which is an important pilgrimage shrine. This afternoon, proceed to the charming riverfront city of Coimbra to visit the Convent of Santa Teresa where Sister Lucia – the eldest of the visionaries of Fatima – resided until her death in 2005. Finish our day in Fatima, our home for the next 3 nights.

A full day is ours in Fatima, where in 1917 three young shepherd children were graced with apparitions of the Virgin Mary. The message of Fatima has inspired generations of Catholics to pray the rosary daily for peace and reparation. Visit the Chapel of Apparitions before praying at the graves of Sts. Francisco and Jacinta, and Servant of God Lucia. Explore the tiny village where the three children lived and continue to Valinhos where Our Lady appeared to the children after they were unjustly imprisoned. It is here she encouraged them and told them they must still come every 13th of the month to see her. On October 13, 1917, during the final apparition, thousands of pilgrims witnessed the Miracle of the Sun – where the sun seemed to dance in the sky. This evening, we participate in a beautiful Stations of the Cross along the Via Sacre or the candlelight rosary procession in the heart of the shrine.

Today we will take an excursion outside of Fatima. Our first stop will be at Alcobaca to visit the 12th century Monastery of Alcobaca, the largest church in Portugal and one of the most prestigious monasteries in medieval Europe. This afternoon, continue to the Church of St. Stephen in Santarem to see one of the greatest Eucharistic Miracles, “The Bleeding Host.” In the 13th century, a woman stole the host to take to a fortune-teller, but as she was taking it out of church the host began to bleed profusely. Afraid, she put it in a trunk at her home only to be awakened in the middle of the night to a bright light coming from the trunk. Taking the host back to the priest, he put it in a wax pyx. Another miracle happened the next morning when they found that the wax had turned into its own crystal pyx, where it can be venerated to this day. After time for prayer here, return to Fatima, where we can participate once again in the evening prayer activities.

Today marks the end of a marvelous experience as we transfer to the airport for the return trip home, filled with memories and graces of this pilgrimage that will last a lifetime. 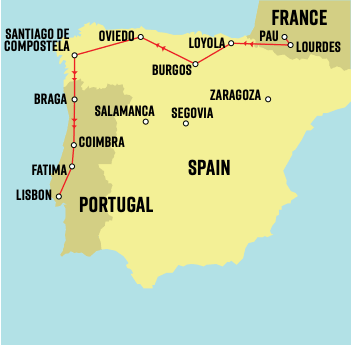 Contact Tekton Ministries to reserve your spot on this life-changing pilgrimage
"Presiding at the Eucharist in the Loyola house where Ignatius recuperated from his wounds and began his conversion and transformation. Each of the shrines we visited had something special for each of us - certainly true for myself."
- Fr. John R., pilgrim from Indianapolis, IN
"My favorite moment was seeing the wheelchairs and gurneys wheeled into the Lady of Lourdes sanctuary."
- Deacon Tom H., pilgrim from Indianapolis, IN
""Tekton took care of all details. They chose excellent hotels, well positioned to our interest points. They required very little from us once we gave them our personal information. I appreciated Richard being at the airport to help us get approved for take off. I think Tekton did a great job.” "
- Rev. James F., pilgrim from Indianapolis, IN