A Truly Catholic Pilgrimage
$3,885
per person

After our arrival in the “Eternal City”, we will be met by our tour manager at the airport and drive north, stopping in the walled town of Orvieto. In the 13th century, in nearby Bolsena, a priest doubted the Eucharistic Presence during Mass and the host turned to real flesh and the wine to real blood during the consecration. The priest brought the blood-stained Corporal to Pope Urban in Orvieto, and it is now kept in a special reliquary for the faithful to view. It was also in Orvieto where Pope Urban IV called for a world-wide Feast of Corpus Christi. After venerating the sacred Eucharistic miracle, we will continue our drive through the beautiful Umbrian countryside to Assisi, a town which welcomes us in the spirit of St. Francis and St. Clare, and our home for the next two nights. Upon arrival we will visit St. Mary of the Angels Basilica, site of the Porziuncola, the tiny church in the woods where St. Francis began his ministry and where St. Clare began her religious life. We will then proceed to our hotel for check-in and dinner. (D)

This morning we will visit St. Mary of the Angels Basilica, the site of the beloved Porziuncola the tiny chapel rebuilt by St. Francis and his fellow friars after Francis took the commandment from the Lord to “rebuild my church” literally, and where St. Clare began her life as a nun. In the heart of Assisi, we will witness where the power of the Eucharist turned away an army. The invading Saracens were about to attack the Convent of San Damiano where St. Clare lived with her nuns in 1241. Even though bed-ridden, St. Clare got up and held the Blessed Sacrament in the air and saw the advancing army flee in terror establishing “The Miracle of the Eucharist of Assisi.” Also in the convent, we will visit the chapel where Jesus spoke to St. Francis from the crucifix, Afterwards visit the Basilica of St. Clare, which holds the famous San Damiano Crucifix that spoke to St. Francis, and where the golden locks of St. Clare’s hair and St. Francis’ poor patched tunic are kept. Journey to the Basilica of St. Francis to venerate his burial place and marvel at the mother church of the Franciscan order (B, D)

Journey outside of Assisi to stopping in Siena, where we visit St. Dominic’s, St. Catherine of Siena’s parish church where she attended daily Mass and went into ecstasy. The people of Siena wanted St. Catherine to be buried in her home church, but they were only able to procure her head, which is preserved for veneration in a reliquary in St. Dominic’s. Adjacent to the church is her birthplace and childhood home, which has been renovated throughout the centuries into a museum, including several chapels and a cloister. Visit the cell where she fasted and prayed, then experience a highlight of our day in the Basilica of St. Francis: venerating the Eucharistic miracle of Siena. Explore the majestic Gothic Cathedral of Siena, also known as the Duomo di Siena, built in the 13th and 14th centuries and dedicated to the Assumption of Mary. After some free time in this charming city, return to Assisi for dinner and overnight. (B/D)

This morning we will depart Assisi and journey southeast, first stopping in Loreto, to visit the Shrine of the Holy House, said to be the same house in which the Virgin Mary was born and raised in Nazareth. This is where she received the visitation of the angel announcing that she was the mother of Jesus and according to tradition the home was transported by four angels from Nazareth to its present resting place in Loreto. Afterwards, we will continue our journey along the Adriatic to Lanciano, site of the oldest miracle of the Eucharist, still preserved after twelve centuries. Overnight in Lanciano. (B, D)

This morning we’ll visit the sanctuary of the 8th century Eucharistic miracle of Lanciano. There will be time for adoration as well as a tour of the museum detailing the history of the miracle. After time for prayer and reflection, we will then drive along the coast to San Giovanni Rotondo, the home of St Padre Pio. Visit his tomb and tour the sanctuary of the Church of Santa Maria delle Grazie, where this famous Saint said Mass. After visiting this mystical Saint’s cell and the parlor where he greeted the faithful, we proceed to our hotel for the night. (B, D)

Depart San Giovanni early this morning and drive up to Monte Sant’ Angelo for a breathtaking view of the Gargano Peninsula and a visit to the Grotto of Michael the Archangel. Afterwards, continue to Monte Cassino to visit the famous Abbey of Monte Cassino, founded by Benedict in 529 after he left Subiaco and where he lived until he died. Monte Cassino is considered by many to be the birthplace of monasticism in Western Europe. We will have a guided tour of the Abbey, including the extensive museum and the relics of Benedict and his sister St. Scholastica which are interred beneath the main altar. Arrive in Rome this evening in time for dinner and check-in at our hotel. (B, D)

Our first full day in Rome is filled with wonder and awe as we steep ourselves in the beauty of St. Peter’s Basilica, which beckons us into its interior through the arms of Bernini’s Colonnade. A quick stop to rub the foot of St. Peter’s statue like thousands of pilgrims before us takes us to marvel at Michelangelo’s Pieta and then to pray at the Perpetual Adoration Chapel renovated by St. John Paul II. Afterwards, we walk through the Vatican Museums which house artifacts from around the world and Eucharistic art to prepare ourselves for the greatest masterpiece yet: The Sistine Chapel. Painted by Michelangelo, it is the most famous ceiling in the world under which popes are chosen to lead the faithful. This afternoon, travel to St. Paul Outside the Walls, originally built by Constantine in the fourth century over the site of St. Paul’s tomb. Afterwards, we proceed to the Catacombs of St. Callistus and venerate the martyrs and early saints of the Church. (B, D)

This morning we travel a short distance outside of Rome to Subiaco, where we visit Benedict’s monastery, built around the Sacro Speco (Holy Cave) where he lived for three years in prayer and seclusion. Here St. Benedict began to codify his Rule, which became the foundation of western monasticism. We will also visit St. Scholastica’s Monastery, built by Benedict and his twin sister, Scholastica, originally one of twelve in this area. We will see the cloisters from the 6th and 11th centuries, as well as the medieval church decorated by Cosmati, before returning to Rome for dinner and overnight. (B, D)

This morning we will attend the weekly Papal audience given by His Holiness, Pope Francis (depending upon the Holy Father’s schedule). This afternoon, the Scala Santa, or Holy Stairs, are prayed this day by going up them on your knees because they are so sacred. Christ walked on these 28 marble stairs at the home of Pontius Pilate before he was condemned to death. For those who cannot climb the stairs on their knees there are other stairs leading to the chapel at the top. Our prayerful experience continues with a visit to St. John Lateran, the Mother Church of the Roman Catholic faithful and the oldest basilica in Europe followed by a stop at St. Clement’s Basilica, built in honor of the fourth pope. An original fresco inside this basilica depicts St. Clement celebrating Mass, giving us a visible history of Eucharistic worship at the end of the first century. (B, D)

We begin this morning at the fourth papal basilica of Rome. At St. Mary Major we venerate the crib of Christ, view the famous icon attributed to St. Luke, and see inestimable artwork that makes Rome renowned throughout the world. This afternoon, enjoy one last walking tour of some of Rome’s other famous sites, including the Piazza Navona, with Bernini’s lavish fountains, and the Pantheon with its unique dome that inspired Michelangelo. Admire the intricate frescoes and paintings of all the side chapels in the Church of the Gesu. Guarantee another visit to Rome by throwing the traditional coin over your shoulder into the Trevi Fountain. This evening we enjoy our farewell dinner together before retiring for our last night in Rome. (B, D) 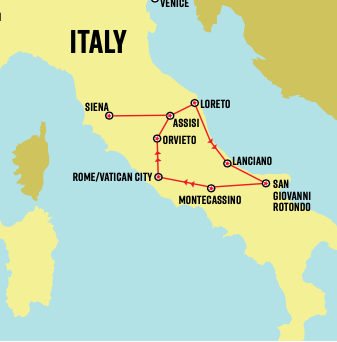