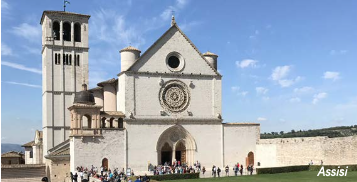 A Truly Catholic Pilgrimage
$4,185
per person

Our pilgrimage begins as we depart on our overnight flight to Italy. Meals and refreshments will be served aloft.

Upon arrival in Rome, we will be met by our tour manager and begin our adventure in Rome. Travel to Santa Croce in Gerusalemme where we get a little piece of Jerusalem thanks to Constantine’s mother, St. Helena, who brought relics of the True Cross and the inscription part of the cross that stated Jesus was King of the Jews. At one time, soil from Jerusalem covered the Basilica’s floor, so it truly was part of the Holy Land. After venerating these relics of Our Lord’s crucifixion, we climb the Scala Santa (Holy Stairs), which our Lord climbed on His way to His condemnation, followed by the Basilica of St. John Lateran. Finally, we proceed to St. Mary Major where we venerate the crib of Christ, view the famous icon attributed to St. Luke, and see inestimable artwork that makes Rome renowned throughout the world. Continue to our hotel, our home for the next six nights for check-in and dinner.

We venture outside of Rome this morning to the ancient Roman port city of Ostia Antica which became an Episcopal See as early as the 3rd century. Explore the well-preserved ruins of the town with its shops, houses, apartment buildings, temples, and forum. The peaceful ruins contrast with the vivacity of the city that it used to be and that is still there for us to perceive. Return to Rome and behold St. Paul Outside the Walls, the great church built by Constantine over the tomb of St. Paul. We journey into the lives of the martyrs as we visit the Catacombs of St. Callixtus. Here Christians celebrated the Mass in secret and buried the martyrs, including several popes. Celebrate the Diaconate Family Mass at 5:30 this evening at the NAC with dinner at the hotel afterwards.

This morning we leave the city of Rome behind to visit the Apostolic Palace of Castel Gandolfo, the summer residence of the pope, and one of Italy’s most scenic lake-towns. The pope’s former residence has its own gardens that are also now open to the public. Enjoy a tour of the villa and gardens before returning to Rome this afternoon, with the balance of the day free to explore on your own. Dinner tonight will also be on our own.

We begin our day in the heart of the Vatican: St. Peter’s Basilica, where we contemplate centuries of history of the Catholic Church. Here we see the life-like Pieta statue by Michelangelo, stunning paintings, and the importance of Eucharistic Adoration at the chapel renovated under the direction of St. John Paul II. Afterwards, we walk through the Vatican Museums which house artifacts from the around the world and Eucharistic art to prepare ourselves for the greatest masterpiece yet: The Sistine Chapel. Painted by Michelangelo, it is the most famous ceiling in the world under which popes are chosen to lead the faithful. One is always looking up at the masterwork of art that explains the theology of God. Later this afternoon, enjoy a tour through the peaceful Vatican Gardens, followed by free time to relax or explore other sections of the city and enjoy dinner on your own at one of Rome’s many restaurants.

This morning we will attend the weekly Papal Audience held by His Holiness, Pope Francis (pending the Holy Father’s schedule). Afterwards, it’s on to Rome’s lovely Trastevere District with medieval cobblestone streets and religious shrines decorating doorways. The main square is dominated by the 12th century Basilica di Santa Maria in Trastevere, a church full of classical wonders from glittering mosaics to the relics of the Holy Sponge and St. Apolonia. Our day continues with a visit to the Basilica di Santa Cecilia built atop her former home. One of the earliest martyrs of Rome, St. Cecilia survived a near-decapitation for three days and was the first saint whose body was found to be incorrupt. Journey to the Pontifical North American College to celebrate a prayer vigil with the candidates for ordination, followed by dinner.

Today is free for events surrounding the Diaconate Ordination at the Vatican. After the Ordination we will proceed to the North American College for a reception. Later in the afternoon we will return to the Vatican and enjoy a tour of the Scavi, the excavations underneath St. Peter’s (subject to availability). We will then return to our hotel. This evening dinner will be hosted by the families of the Newly Ordained at a local restaurant.

We begin by participating in a Mass of Thanksgiving with the newly ordained. We then drive north to Orvieto a walled town high on a hill that holds one of the greatest Eucharistic Miracles in its cathedral. In nearby Bolsena, a priest doubted the Eucharistic Presence during Mass and the host turned to real flesh and the wine to real blood during the consecration. The priest brought the blood-stained Corporal to Pope Urban in Orvieto, and it is now kept in a special reliquary for the faithful to view. See the steps of the Papal summer residence where Pope Urban IV held up the blood-stained corporal and announced his intention to institute the Feast of Corpus Christi. After venerating the sacred Eucharistic miracle, we will continue our drive through the beautiful Umbrian countryside to Assisi, a town which welcomes us in the spirit of St. Francis and St. Clare, and our home for the next two nights. Upon arrival we will visit St. Mary of the Angels Basilica, site of the Porziuncola, the tiny church in the woods where St. Francis began his ministry and where St. Clare began her religious life. We will then proceed to our hotel for check-in and dinner.

This morning we will visit St. Mary of the Angels Basilica, the site of the beloved Porziuncola the tiny chapel rebuilt by St. Francis and his fellow friars after Francis took the commandment from the Lord to “rebuild my church” literally, and where St. Clare began her life as a nun. In the heart of Assisi, we will witness where the power of the Eucharist turned away an army. The invading Saracens were about to attack the Convent of San Damiano where St. Clare lived with her nuns in 1241. Even though bed-ridden, St. Clare got up and held the Blessed Sacrament in the air and saw the advancing army flee in terror establishing “The Miracle of the Eucharist of Assisi.” Also in the convent, we will visit the chapel where Jesus spoke to St. Francis from the crucifix. Afterwards visit the Basilica of St. Clare, which holds the famous San Damiano Crucifix that spoke to St. Francis, and where the golden locks of St. Clare’s hair and St. Francis’ poor patched tunic are kept. Journey to the Basilica of St. Francis to venerate his burial place and marvel at the mother church of the Franciscan order.

This morning we will depart Assisi and journey south, stopping in Cascia to visit the Shrine of St. Rita and venerate the Eucharistic Miracle of Cascia. We then proceed to the medieval town of Greccio. Greccio itself, set on a beautiful mountaintop, is famous for its cool summer climate and its mineral springs. However, it is even more renowned for its connections with St. Francis of Assisi and as the birthplace of the Christmas crèche. On Christmas Night 1223, St. Francis led shepherds to the top of a nearby hill where they gathered in a stable sheltering an ox and a donkey. According to legend, the Baby Jesus miraculously appeared in the manger. On this spot the Franciscan convent of Greccio was built, and the Chapel of the Crib was erected in 1228, the year St. Francis was canonized. Continue to Rome for our final night in Italy.

Today we say “Ciao” to Italia and transfer to the airport for our return flight home, cherishing all the wonderful memories and graces of this pilgrimage. 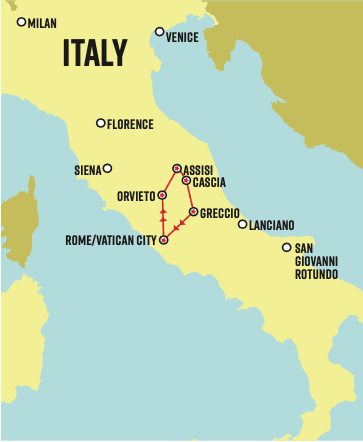