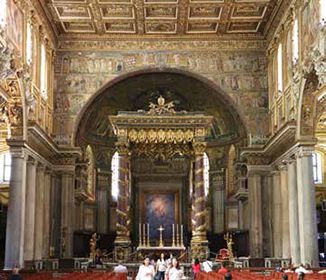 Our tour of Florence is an artful experience as we take in the Ponte Vecchio, the Duomo, and the Baptistery with its renowned bronze doors. We will visit the Franciscan Basilica of Santa Croce* to celebrate Mass before heading out into the Tuscan countryside. In this region, we will visit a family-owned winery and enjoy the delicacies of the area before returning to Florence.

This morning we will attend the weekly Papal audience* given by His Holiness, Pope Francis (depending upon the Holy Father’s schedule). Visit and celebrate Mass at St. Paul Outside the Walls, originally built by Constantine in the fourth century over the site of St. Paul’s tomb. After some time for prayer, we visit the Tre Fontane, site of three fountains and three churches, where St. Paul was beheaded. Afterwards, we proceed to the Catacombs of St. Callistus* and venerate the martyrs and early saints of the Church. This evening, we will enjoy dinner at a local restaurant near the Piazza Navona, including a walking tour to the Pantheon, Spanish Steps, and the Trevi Fountain where a coin thrown over your shoulder will guarantee you another visit to Rome.

We begin our day in Rome with morning Mass in St. Peter’s Basilica, followed by an exploration of the Scavi Excavations* below the basilica including the tomb of St. Peter. Afterwards, venerate the Holy Stairs and the Basilica of St. John Lateran, followed by a visit to St. Peter in Chains where we will see Michaelangelo’s magnificent statue of Moses. Proceed to St. Clement’s Basilica* – housing an original fresco depicting St. Clement celebrating the Holy Sacrifice of the Mass, giving us a picture of Eucharistic worship at the end of the first century or beginning of the second. End our day with a visit to St. Mary Major, the fourth major basilica of Rome.

This morning, we begin with a tour of the Vatican Gardens. Then we explore the Vatican Museum and the Sistine Chapel with its breathtaking frescoes painted by Michelangelo. Afterwards, we will enjoy a tour of St. Peter’s including the Pieta and Adoration Chapel. 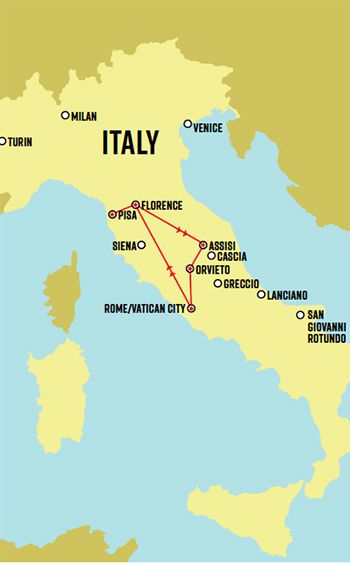