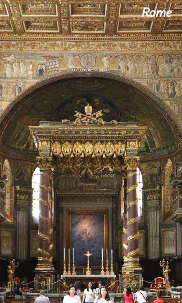 A Truly Catholic Pilgrimage
$3,975
per person

Upon arrival in Florence, we are met at the airport by our tour manager, who will be with us for the duration of our pilgrimage. Time permitting, we will celebrate Mass and then check-in at our hotel, home for the next 2 nights. (D, Mass)

Florence is a city of masterpieces where numerous churches and family chapels were painted by the greatest artists of the Renaissance to give Glory to God. We’ll enjoy a full city tour of this magnificent Renaissance city today. Stroll the same streets Michelangelo, Leonardo Da Vinci, and Botticelli walked. Gaze at artwork so divine it is still moving hearts, centuries after its creation. Where else can one admire Michelangelo’s David, gaze at the famous Perseus statue by Benvenuto Cellini, eat the best food, and go into deep contemplation all in one day? See the famous dome on Florence’s cathedral – Duomo di Firenze – that dominates the skyline, and walk along the Ponte Vecchio, the famous bridge designed by a Dominican friar. Visit the Baptistry chapel, where thousands have received the Sacrament of Baptism, with its bronze Gates of Paradise showcasing fabulous castings of the Old Testament that seem to come to life. Continue onto Santa Maria Novella Church whose religious artwork is prized throughout the world. Enter the Santa Croce Church with its 16 chapels of superb frescoes by Giotto and see where Italy’s most famous Italians are buried: Michelangelo and Galileo. (B, D, Mass)

We will depart Tuscany today and travel to the region of Umbria, stopping in Siena, where we visit St. Dominic’s, St. Catherine of Siena’s parish church where she attended daily Mass and went into ecstasy. The people of Siena wanted St. Catherine to be buried in her home church, but they were only able to procure her head, which is preserved for veneration in a reliquary in St. Dominic’s. Adjacent to the church is her birthplace and childhood home, which has been renovated throughout the centuries into a museum, including several chapels and a cloister. Visit the cell where she fasted and prayed, then experience a highlight of our day in the Basilica of St. Francis: venerating the Eucharistic miracle of Siena. Explore the majestic Gothic Cathedral of Siena, also known as the Duomo di Siena, built in the 13th and 14th centuries and dedicated to the Assumption of Mary. This afternoon we continue on to the peaceful village of Assisi, a town which welcomes you in the spirit of St. Francis and St. Clare into its peaceful interior, and our home for the next two nights. (B, D, Mass)

This morning we will visit St. Mary of the Angels Basilica, the site of the beloved Porziuncola the tiny chapel rebuilt by St. Francis and his fellow friars after Francis took the commandment from the Lord to “rebuild my church” literally, and where St. Clare began her life as a nun. In the heart of Assisi, we will witness where the power of the Eucharist turned away an army. The invading Saracens were about to attack the Convent of San Damiano where St. Clare lived with her nuns in 1241. Even though bed-ridden, St. Clare got up and held the Blessed Sacrament in the air and saw the advancing army flee in terror establishing “The Miracle of the Eucharist of Assisi.” Also in the convent, we will visit the chapel where Jesus spoke to St. Francis from the crucifix, Afterwards visit the Basilica of St. Clare, which holds the famous San Damiano Crucifix that spoke to St. Francis, and where the golden locks of St. Clare’s hair and St. Francis’ poor patched tunic are kept. Journey to the Basilica of St. Francis to venerate his burial place and marvel at the mother church of the Franciscan order. Dinner tonight will be on your own. (B, Mass)

Depart this morning for the walled town of Orvieto. In the 13th century, in nearby Bolsena, a priest doubted the Eucharistic Presence during Mass and the host turned to real flesh and the wine to real blood during the consecration. The priest brought the blood-stained Corporal to Pope Urban in Orvieto, and it is now kept in a special reliquary for the faithful to view. It was also in Orvieto where Pope Urban IV called for a world-wide Feast of Corpus Christi. The Cathedral of Orvieto has striking similarities to the beautiful Duomo in Florence with its unique exterior. Inside is the Signorelli Chapel that holds some of the greatest artistic masterpieces in the world. There will be ample time for both prayer and adoration in these majestic surroundings before continuing to Rome to check into our hotel, our home for the next five nights. (B, D, Mass)

We begin today in Santa Croce in Gerusalemme where we get a little piece of Jerusalem thanks to Constantine’s mother, St. Helena, who brought relics of the True Cross and the inscription part of the cross that stated Jesus was King of the Jews. At one time, soil from Jerusalem covered the Basilica’s floor, so it truly was part of the Holy Land. After venerating these relics of Our Lord’s crucifixion, we climb the Scala Santa (Holy Stairs), which our Lord climbed on His way to His condemnation, followed by the Basilica of St. John Lateran. Afterwards, we continue to St. St. Clement Basilica, which houses an original fresco depicting St. Clement celebrating the Holy Sacrifice of the Mass, giving us a picture of Eucharistic worship at the end of the first century or the beginning of the second. Lastly, we’ll admire Michelangelo’s magnificent statue of Moses inside St. Peter in Chains. Finally, we proceed to St. Mary Major where we venerate the crib of Christ, view the famous icon attributed to St. Luke, and see inestimable artwork that makes Rome renowned throughout the world. (B, D, Mass)

We begin our day with a tour through the peaceful Vatican Gardens. Then we enter the magnificent St. Peter’s Basilica for Mass, followed by a tour of St. Peter’s including the Pieta and Adoration Chapel. Afterwards, we walk through the Vatican Museums which house artifacts from the around the world and Eucharistic art to prepare ourselves for the greatest masterpiece yet: The Sistine Chapel. Painted by Michelangelo, it is the most famous ceiling in the world under which popes are chosen to lead the faithful. One is always looking up at the masterwork of art that explains the theology of God. This is followed by free time to relax or explore other sections of the city. Enjoy dinner on your own this evening at one of Rome’s many restaurants. (B, Mass)

This morning, we travel to the last of the four major basilicas of Rome – St. Paul Outside the Walls. Though it was destroyed by a fire in 1823, it was originally built by Constantine in the fourth century over the site of St. Paul’s tomb and was rebuilt in the 19th century exactly as it was before the fire. We then journey into the lives of the martyrs as we visit the Catacombs. Here Christians celebrated the Mass in secret and buried the martyrs, including several popes. Afterwards, it’s on to Rome’s lovely Trastevere District with medieval cobblestone streets and religious shrines decorating doorways. The main square is dominated by the 12th century Basilica di Santa Maria, a church full of classical wonders from glittering mosaics to the relics of the Holy Sponge and St. Apolonia. Our day continues with a visit to the Basilica di Santa Cecilia built atop her former home. One of the earliest martyrs of Rome, St. Cecilia survived a near-decapitation for three days and was the first saint whose body was found to be incorrupt. (B, D, Mass)

This morning we enjoy a walking tour in the heart of Rome, including inside visits to the Colosseum and Forum, followed by the Pantheon, Piazza Navona, Spanish Steps, and the Trevi Fountain – where a coin thrown over your shoulder will guarantee you another visit to Rome. You will then have the afternoon free to explore sections of the city not on our itinerary, or perhaps revisit one of your favorite sites from earlier in the pilgrimage. This evening, we will enjoy a farewell dinner to celebrate the end of our Italian pilgrimage at a local restaurant. (B, D, Mass) 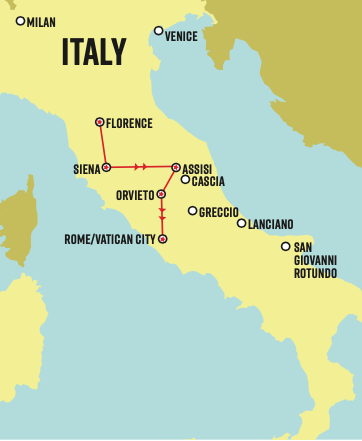 Coming Soon!
Contact Tekton Ministries to reserve your spot on this life-changing pilgrimage
"My favorite moment was offering Mass on the altar of Pope St. Gregory the Great in St. Peter's."
- Fr. Sean D., pilgrim from Pawhuska, OK
"Celebrating Mass at the tomb of St. Francis, my confirmation saint, was an incredible gift. As our pilgrimage continued, I was drawn into each and every altar and chapel that Mass was celebrated, but the uniqueness of that place was memorable."
- Fr. Steven M., pilgrim from Lincoln, NE