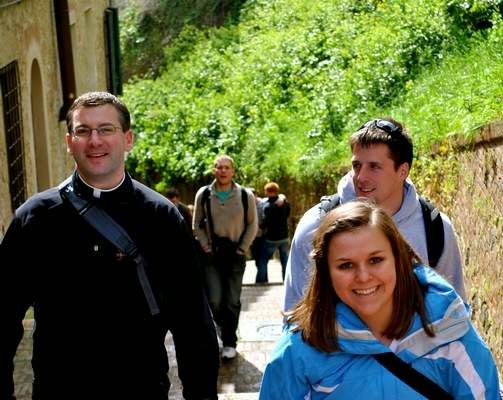 Pilgrimage to Italy meaningful to visitors

By Judy Horan / World-Herald correspondent
Trappist nuns carefully watch over a more-than-2,000-year-old veil in the ancient Italian town of Manoppello. The veil, said to have covered Christ during his burial and resurrection, is believed to show the image of his face. It is displayed in the Basilica of the Holy Face.
For University of Nebraska-Lincoln philosophy major Ben Mattern, who recently was part of a group that traveled to Italy, seeing the face on the veil in person was an awesome experience.
“If you lay this cloth up against the Shroud of Turin, they match perfectly,” Mattern said. “We spent the morning for three hours praying and reflecting on the cloth. We had Mass there. It was a very big moment for everybody in our group.”
Mattern was one of 44 college students, mostly from UNL, who signed up for the March 20-30 trip, the fourth pilgrimage to Italy sponsored by the Newman Center.
“When you come into the church, the veil is completely transparent. You can see through it, but when light hits the silk, the image of Christ’s face is clearly seen,” said the Rev. Ben Holdren, associate pastor of St. Thomas Aquinas Catholic Church, who led the pilgrimage. “Nobody knows quite sure how the image is there.”
Holdren also is assistant spiritual director for the Newman Center, a student organization attached to the church on UNL’s campus.
He said the Newman Center and St. Thomas Aquinas Catholic Church are busy places for “huskercatholic” students. (Students can be seen wearing T-shirts with “huskercatholic” on them). About 1,200 students walk through the doors Sunday for Mass. More than 600 students participate in Bible studies.
Another face that awed Mattern on the pilgrimage was the smiling face of Pope Francis in Vatican City.
“One of the biggest highlights was seeing the pope and seeing his great joy for all of us. The Holy Father had this huge smile on his face. He loves seeing us as much as we loved to see him,” the UNL senior said.
Sophomore Kathryn Kopetzky, an education major at UNL, sat about 5 feet from the popemobile as Pope Francis rode by, greeting visitors before his papal address.
“Being that close to Pope Francis was so incredible,” she said. “I’ve seen videos and pictures of him, but it was different just being that close to him, seeing him in real life and seeing he was an actual person.”
Pope Francis addressed the group in Italian, and priests from countries that were represented translated.
Mattern found joy at St. Peter’s Basilica, the center of the Catholic faith, despite waiting in St. Peter’s Square for three hours in pouring rain.
“My group was surrounded by Italians and French people, and we were having a good time and talking and laughing,” he said.
“Joy spread all around, in spite of the fact that we couldn’t communicate with each other. It was so much fun. One person would start a song, and others would join in. The joy was infectious.”
Kopetzky was struck, while at the papal audience, by how Catholicism brings the world together.
“The pope was translated into about seven different languages,” Kopetzky said. “They were from all over the world, but were united being Catholic.”
The group from Lincoln celebrated Mass at the Tomb of John Paul II in St. Peter’s Basilica.
“He was the pope for most of my life growing up,” Kopetzky said. “The pope was kind and loving. He always said, ‘Do not be afraid,’ and that stuck with me. I’ve always had a love of him.”
Holdren said the visit is about making Christianity tangible.
“We can actually go to the place where the first Christians would have had Mass in underground catacombs,” he said. “We can actually physically see the bones of St. Peter and climb the stairs that Jesus would have climbed when condemned by Pontius Pilate.”
Mattern climbed the same Holy Stairs that Christ had climbed. The Lincoln student ascended the steep staircase on his knees along with other pilgrims. There are 28 steps.
“It’s incredibly painful, but we made it up by the grace of God,” said Mattern, who stopped to pray on each step while climbing. Despite the pain, he managed the climb in 30 minutes.
“It’s a very spiritual experience.”
For Mattern, the pilgrimage was a way of getting away from routine life to spend time with God.
“I needed some time away from the daily grind of life to spend time with Him so he could reveal to me all the changes in my life I needed to do,” he said. “The 10 days were very spiritual. A lot of things were revealed to me that I need to work on. Some were hard to hear, and some were great to hear.”
Click here to see article in original location.
Copyright ©2014 Omaha World-Herald. All rights reserved. This material may not be published, broadcast, rewritten, displayed or redistributed for any purpose without permission from the Omaha World-Herald. To purchase rights to republish this article, please contact The World-Herald Store.