Tour a land steeped in the history of martyrs and well-known saints. See how the Catholic faith grew as a signpost to the world. Touch the relics of saints who lived and died for the Catholic faith, walk in ancient civilizations, and pray in front of awe-inspiring masterpieces.

Upon arrival at the airport in Rome, we are met by our tour manager who will be with us for the duration of our pilgrimage in Italy. We travel north on a beautiful drive through the Umbrian countryside to Assisi, the picturesque town made known by the piety and works of St. Francis and St. Clare. We visit St. Mary of the Angels Basilica, the site of the beloved Porziuncola the tiny chapel rebuilt by St. Francis and his fellow friars after Francis took the commandment from the Lord to “rebuild my church” literally, and where St. Clare began her life as a nun. Afterwards, we check-into the hotel that is our home for the next three nights. There is some free time before dinner in this peaceful and medieval town.

Witness where the power of the Eucharist turned away an army. The invading Saracen army was about to attack the Convent of San Damiano where St. Clare lived with her nuns in 1241. Even though bed-ridden, St. Clare got up and held the Blessed Sacrament in the air and saw the advancing army flee in terror establishing “The Miracle of the Eucharist of Assisi.” Also in the convent, we will visit the chapel where Jesus spoke to St. Francis from the crucifix, then visit the Basilica of St. Francis to venerate his burial place. Afterwards is the Basilica of St. Clare, which holds the famous San Damiano Crucifix that spoke to St. Francis, and where the golden locks of St. Clare’s hair and St. Francis’ poor patched tunic are kept. This afternoon we will travel up Mt. Subasio to L’Eremo delle Carceri (the Carceri Hermitage), St. Francis’ favorite retreat center, where he could remain in seclusion and prayer. Enjoy some personal prayer time in this peaceful location before enjoying a dinner out together at a local winery.

The home of St. Catherine of Siena beckons as we venerate the great Eucharistic Miracle of Siena at the Basilica of St. Francis on our day trip from Assisi. Thieves stole a container of consecrated Hosts, which were later found in the church’s offertory box. They were reverently collected and have remained incorrupt since 1730. We then visit the Basilica of St. Dominic where St. Catherine attended daily Mass and went into spiritual ecstasy. Inside, the Chapel of Vaults holds the only portrait of the saint painted while she was alive. Some of her relics are also here to venerate. Adjacent to the church is the home where she lived, fasted, and prayed. We take a stroll through the ancient streets of Siena, which converge on the Piazza del Campo known as one of the most beautiful squares in the world with its soaring bell tower and unique shell-like shape. We’ll enjoy some time for personal activities before returning to Assisi for our last night in this peaceful town.

Fall in love with Orvieto, a walled town high on a hill that holds one of the greatest Eucharistic Miracles in its cathedral. In nearby Bolsena, a priest doubted the Eucharistic Presence during Mass and the host turned to real flesh and the wine to real blood during the consecration. The priest brought the blood-stained Corporal to Pope Urban in Orvieto, and it is now kept in a special reliquary for the faithful to view. It was also in Orvieto where Pope Urban IV called for a world-wide Feast of Corpus Christi. The Cathedral of Orvieto has striking similarities to the beautiful Duomo in Florence with its unique exterior. Inside is the Signorelli Chapel that holds some of the greatest artistic masterpieces in the world. Afterwards we travel to Rome, our home for the next six nights.

We go to the heart of ancient Rome to the Mamertine Prison where St. Paul was kept in chains for his preaching of the Gospel. We have outside visits to the Forum, an ancient Roman marketplace, and the Coliseum, before visiting St. Clement’s Basilica. Built over the home of the fourth Pope, it holds great historical significance especially in its ancient fresco depicting Eucharistic worship at the end of the first century. At St. Peter in Chains, we see the actual chains that held St. Peter when he was imprisoned in Rome and view Michelangelo’s magnificent statue of Moses. At St. Mary Major we venerate the crib of Christ, view the famous icon painting attributed to St. Luke, and see inestimable artwork that makes Rome renowned throughout the world.

Our morning begins at St. Paul Outside the Walls, the great church built by Constantine over the tomb of St. Paul. We journey into the lives of the martyrs as we visit the Catacombs of St. Callixtus. Here Christians celebrated the Mass in secret and buried the martyrs, including several popes. This afternoon we visit Santa Maria Vallicella the mother church of the Oratorians founded by St. Philip Neri in 1561. See its vaulted ceilings painted in golds and heavenly blues with outstanding frescos. Afterwards, we visit Sant’Agostino, built in honor of St. Augustine. It holds the tomb of his steadfast and faithful mother, St. Monica. This evening, enjoy dinner out on your own in one of Rome’s many delightful restaurants.

Begin your day in the heart of the Vatican: St. Peter’s Basilica, where we contemplate centuries of history of the Catholic Church. Here we see the life-like Pieta statue by Michelangelo, stunning paintings, and the importance of Eucharistic Adoration at the chapel renovated under the direction of St. John Paul II. We then tour the Vatican Museum that hosts artifacts from around the world, some of the greatest depictions of the Eucharist in art, papal apartments, hand-woven intricate tapestries, and the stunning hallway of maps from the 1500s. The most famous ceiling in the world awaits us inside the Sistine Chapel. Popes are elected under this ceiling and the faithful have continued to come and be awed by its splendor for centuries.

The Scala Santa, or Holy Stairs, are prayed this morning by climbing them on your knees because they are so sacred. Christ walked on these 28 marble stairs at the home of Pontius Pilate to be condemned to death. For those who cannot climb the stairs on their knees there are other stairs available for walking up that also lead to the chapel at the top. Our prayerful experience continues with a visit to St. John Lateran, the Mother Church of the Roman Catholic faithful and the oldest basilica in Europe. Afterwards, it’s on to Rome’s lovely Trastevere District with medieval cobblestone streets and religious shrines decorating doorways. The main square is dominated by the 12th century Basilica di Santa Maria, a church full of classical wonders from glittering mosaics to the relics of the Holy Sponge and St. Apolonia. Our day continues with a visit to the Basilica di Santa Cecilia built atop her former home. One of the earliest martyrs of Rome, St. Cecilia survived a near-decapitation for three days and was the first saint whose body was found to be incorrupt. Enjoy a walking tour of some of Rome’s other famous sites, including the Piazza Navona, with Bernini’s lavish fountains, and the Pantheon with its unique dome that inspired Michelangelo. Guarantee another visit to Rome by throwing the traditional coin over your shoulder into the Trevi Fountain. Enjoy dinner out on your own this evening in one of Rome’s many delightful restaurants.

This morning, we join thousands of other pilgrims for a Papal Audience at St. Peter’s Basilica to hear the Pope’s words and receive his blessing – as his schedule allows. Afterwards, travel to St. Lawrence Outside the Walls, commemorating the martyrdom of St. Lawrence, one of the first deacons of Rome. Peek through one of the grates under the altar and you might see some of the ancient tunnels that led to a catacomb where he was first buried. The remains of the martyrs St. Justin and St. Stephen are also beneath the altar. This gem of a church also holds the body of Pope Pius IX who declared the Dogma of the Immaculate Conception of Mary. Visit the NAC – the North American College, where many seminarians from the US study for the priesthood, before sharing in a farewell dinner together at a local restaurant this evening. 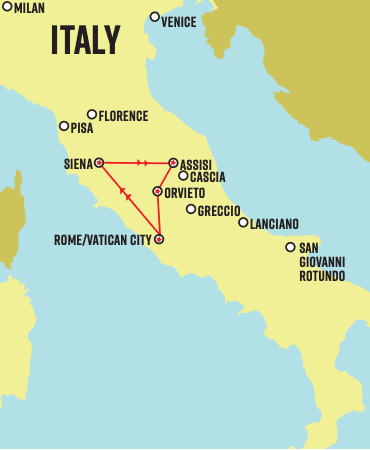