A grand spiritual journey throughout Italy begins with a papal audience and visits to some of the greatest churches in Rome. We climb the Holy Stairs that Christ did, journey into ancient Rome, and visit the breathtaking Sistine Chapel by Michelangelo. Visit the towns of the saints who shaped Italy’s spiritual landscape and see the fruits of their prayers. We encounter Eucharistic miracles that have remained unchanged for centuries before ending in remarkable Florence, a wonder of architecture, art, and all that is beautiful. 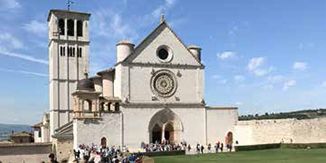 Basilica of St. Francis - Assisi
A pilgrimage to the saints and shrines of Italy
$3,440
per person

After our morning arriving in the “Eternal City,” we will be met at the airport by our tour manager, who will be accompanying us throughout the duration of our pilgrimage. We will have a leisurely afternoon with Mass and free time to relax or explore part of the city. Transfer to our hotel for check-in and dinner.

On our first full day in Rome, we will attend the weekly Papal audience given by His Holiness, Pope Francis (depending upon the Holy Father’s schedule). Then we’ll head to the Mamertine Prison where St. Paul was kept in chains, view the Forum and Coliseum from the outside, and stop at St. Clement’s to see the second century dwelling of Pope St. Clement, the third successor of St. Peter, and the original fresco depicting St. Clement celebrating the Holy Sacrifice of the Mass. This fresco gives us a picture of Eucharistic worship at the end of the first century or the beginning of the second. A stop at St. Peter in Chains to view Michelangelo’s magnificent Moses will round out our day.

We begin our day today with an early Mass in St. Peter’s Basilica where we contemplate centuries of history of the Catholic Church. Here we see the life-like Pieta statue by Michelangelo, stunning paintings, and the importance of Eucharistic Adoration at the chapel renovated under the direction of St. John Paul II. We then tour the Vatican Museum that hosts artifacts from around the world, some of the greatest depictions of the Eucharist in art, papal apartments, hand-woven intricate tapestries, and the stunning hallway of maps from the 1500s. The most famous ceiling in the world awaits us inside the Sistine Chapel. In the afternoon we’ll journey to see the Holy Stairs and the Basilica of St. John Lateran, and end our day with a visit to St. Mary Major. Here we venerate the crib of Christ, view the famous icon painting attributed to St. Luke, and see inestimable artwork that makes Rome renowned throughout the world.

This morning we travel to St. Paul’s Outside the Walls, originally built by Constantine in the fourth century over the site of St. Paul’s tomb. Afterwards, we’ll proceed to the Spanish Steps and the Trevi Fountain, then visit the Pantheon, an ancient Roman structure rebuilt into a Church, where the famous painter Raphael is buried. Continue on to the Piazza Navona and then you will be free for the remainder of the day for shopping or visiting another of Rome’s famous churches or piazzas.

Today we depart Rome and drive north, stopping in Orvieto to venerate the sacred Eucharistic miracle of Bolsena. In 1263, a priest in Bolsena doubted the Eucharistic Presence during Mass and the host turned to real flesh and the wine to real blood during the consecration. The priest brought the blood-stained Corporal to Pope Urban in nearby Orvieto, and it is now kept in a special reliquary for the faithful to view. It was also in Orvieto where Pope Urban IV called for a world-wide Feast of Corpus Christi. There will be time for both prayer and adoration in the magnificent cathedral. Afterwards, we continue on to Assisi, a town that welcomes us in the spirit of St. Francis and St. Clare into its peaceful interior, and our home for the next three nights.

Our day begins with a visit to St. Mary of the Angels Basilica, site of the Porziuncola, the tiny church in the woods where St. Francis began his ministry and where St. Clare was consecrated. Continue to the Convent of San Damiano where the miracle of the Eucharist of 1211 took place and visit the chapel where Jesus spoke to St. Francis from the crucifix, and the Basilica of St. Francis. Finally, proceed to the Basilica of St. Clare to venerate her incorrupt body and see the Gothic Crucifix that spoke to St. Francis, asking him to “Rebuild my Church.” Return to our hotel for our second night in this peaceful medieval town.

Today will be a day of prayer and reflection, as we head up Monte Subasio this morning to L’Eremo delle Carceri (the Carceri Hermitage), the Saint’s favorite retreat. There are many caves here that St. Francis and his followers retreated to for seclusion and prayer. The remainder of the day will be free for personal activities in this retreat-like setting, before descending once again into Assisi.

This morning we depart Assisi and journey to Siena, home of St. Catherine. Our first stop, and a highlight of our tour, will be the Basilica of St. Francis where we’ll venerate the Eucharistic miracle of Siena: Hosts which have remained incorrupt since 1730. Then we’ll celebrate Mass at St. Dominic’s, St. Catherine of Siena’s parish church where she attended daily Mass and went into ecstasy. Adjacent to the church is her home, which we’ll visit and see the cell where she fasted and prayed. Afterwards, we stroll the ancient Gothic streets which converge on the Piazza del Campo, one of the most beautiful squares in the world. Enjoy some free time in this mystical walled city before continuing to Florence, our home for the next two nights.

We’ll enjoy a full city tour of this magnificent Renaissance city today. Stroll the same streets Michelangelo, Leonardo Da Vinci, and Botticelli walked. Gaze at artwork so divine it is still moving hearts centuries after its creation. See the famous dome on Florence’s cathedral, stare in awe at Michelangelo’s statue of David, and walk along the Ponte Vecchio, the famous bridge designed by a Dominican friar. Visit the Baptistry chapel, with its bronze Gates of Paradise showcasing fabulous castings of the Old Testament. Continue onto Santa Maria Novella Church whose religious artwork is prized throughout the world. Enter the Santa Croce Church with its 16 chapels of superb frescoes by Giotto and see where Italy’s most famous Italians are buried. The rest of the afternoon is free for your own discoveries until our farewell dinner later this evening.

Today we say Ciao to Italia and return home, cherishing all of the wonderful memories and graces of this pilgrimage. 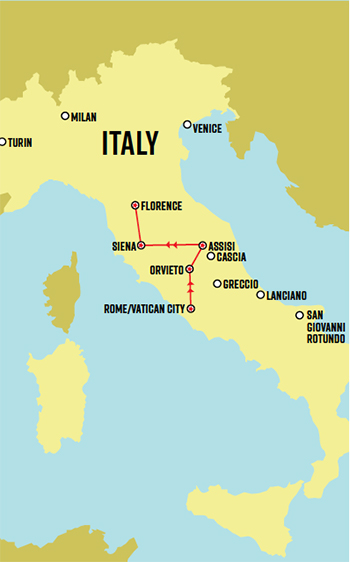