See where the foundations of the Catholic faith are displayed to the eyes of the world. To visit Italy is to journey to the past as history comes alive.

A Truly Catholic Pilgrimage
$4,140
per person

Upon arrival in Rome, we will be met by our tour manager and begin our adventure in Rome, the “Eternal City.” Travel to one of the four major basilicas of Rome – St. Paul Outside the Walls. Though it was destroyed by a fire in 1823, it was originally built by Constantine in the fourth century over the site of St. Paul’s tomb and was rebuilt in the 19th century exactly as it was before the fire. After some time for prayer here, we visit the Tre Fontane, site of three fountains and three churches, where St. Paul was beheaded. Next, we proceed to the Catacombs of St. Callistus and venerate the martyrs and early saints of the Church. Afterwards, head to our hotel to check in before our dinner and overnight. (D)

Pending confirmation, this morning we will split into smaller groups to tour the Scavi, venerating the burial place of St. Peter. We then cross the Tiber to venerate the site of our patroness’s martyrdom. On the edge of the Piazza Navona stands the Baroque church of Sant’Agnese in Agone (St. Agnes in Agony), rebuilt in the 17th century on the site of an ancient church of the same name. Afterwards, we continue to St. Clement Basilica, which houses an original fresco depicting St. Clement celebrating the Holy Sacrifice of the Mass, giving us a picture of Eucharistic worship at the end of the first century or the beginning of the second. Finally, we climb the Scala Santa (Holy Stairs), which our Lord climbed on His way to His condemnation, followed by the Basilica of St. John Lateran. (B, D, Mass)

We begin our day in Rome with morning Mass in St. Peter’s Basilica, followed by a tour of St. Peter’s including the Pieta and Adoration Chapel. Those who want can climb up to the Cupola of St. Peter’s Basilica for a breathtaking view of Rome. Walk through the Vatican Museums which house artifacts from around the world and Eucharistic art to prepare ourselves for the greatest masterpiece yet: The Sistine Chapel. Painted by Michelangelo, it is the most famous ceiling in the world under which popes are chosen to lead the faithful. Afterwards, we’ll admire Michaelangelo’s magnificent statue of Moses inside St. Peter in Chains. Finally, we proceed to St. Mary Major where we venerate the crib of Christ, view the famous icon attributed to St. Luke, and see inestimable artwork that makes Rome renowned throughout the world. (B)

This morning, we will enjoy a tour of the Church of the Gesu, the Mother Church of the Jesuits, founded by St. Ignatius himself. We will venerate the relics of the saints and take in the intricate frescoes and paintings in all the side chapels, including the tomb of St. Ignatius. Afterwards we will pilgrimage to the Chiesa di Sant’Ignazio di Loyola with its beautiful frescoes celebrating the life of St. Ignatius and the Society of Jesus. We then travel to Santa Maria Sopra Minerva, once the headquarters of the Dominican Order, where we can marvel at the Gothic interior and the New-Gothic restoration. We then proceed to the Piazza Navona and visit the Baroque church of Sant’Agnese in Agone (St. Agnes in Agony), rebuilt in the 17th century on the site of an ancient church of the same name. (B, D)

Depart Rome, driving north to the walled town of Orvieto. In the 13th century, in nearby Bolsena, a priest doubted the Eucharistic Presence during Mass and the host turned to real flesh and the wine to real blood during the consecration. The priest brought the blood-stained Corporal to Pope Urban in Orvieto, and it is now kept in a special reliquary for the faithful to view. It was also in Orvieto where Pope Urban IV called for a world-wide Feast of Corpus Christi. After venerating the sacred Eucharistic miracle, we will continue our drive through the beautiful Umbrian countryside to Assisi, a town which welcomes us in the spirit of St. Francis and St. Clare, and our home for the next two nights. Upon arrival we will visit St. Mary of the Angels Basilica, site of the Porziuncola, the tiny church in the woods where St. Francis began his ministry and where St. Clare began her religious life. We will then proceed to our hotel for check-in and dinner. (B, D)

Today we will witness where the power of the Eucharist turned away an army. The invading Saracen army was about to attack the Convent of San Damiano where St. Clare lived with her nuns in 1241. Even though bed-ridden, St. Clare got up and held the Blessed Sacrament in the air and saw the advancing army flee in terror establishing “The Miracle of the Eucharist of Assisi.” Also in the convent, we will visit the chapel where Jesus spoke to St. Francis from the crucifix, then visit the Basilica of St. Francis to venerate his burial place. Afterwards is the Basilica of St. Clare, which holds the famous San Damiano Crucifix that spoke to St. Francis, and where the golden locks of St. Clare’s hair and St. Francis’ poor patched tunic are kept. The remainder of the day will be free for personal prayer and activities. (B, D)

Make a day trip from Assisi to Siena, where we visit St. Dominic’s, St. Catherine of Siena’s parish church where she attended daily Mass and went into ecstasy. The townspeople wanted St. Catherine to be buried in her home church, but they were only able to procure her head, which is preserved for veneration in a reliquary in St. Dominic’s. Adjacent to the church is her birthplace and childhood home, which has been renovated throughout the centuries into a museum, including several chapels and a cloister. Visit the cell where she fasted and prayed, then experience a highlight of our day in the Basilica of St. Francis: venerating the Eucharistic miracle of Siena. Explore the majestic Gothic Cathedral of Siena, also known as the Duomo di Siena, built in the 13th and 14th centuries and dedicated to the Assumption of Mary before returning to Assisi. (B, D, Mass)

This morning we will depart Assisi and journey to Citta di Castello, home of St. Margaret of Castello. Venerate her final resting place in the imposing Gothic Church of San Domenico. After ample time for prayer, we continue to Loreto, to visit the Shrine of the Holy House, said to be the same house in which the Virgin Mary was born and raised in Nazareth. This is where she received the visitation of the angel announcing that she was the mother of Jesus and according to tradition the home was transported by four angels from Nazareth to its present resting place in Loreto. Check into our hotel for dinner and overnight. (B, D)

Journey south along the Adriatic coast to San Giovanni Rotondo, where we will enjoy a tour of this quaint 11th century town where Padre Pio spent most of his life. Visit his tomb and tour the sanctuary of the Church of Santa Maria delle Grazie, where this mystical Saint said Mass. Visit the Capuchin Monastery where he lived to view his cell and the parlor where he greeted the faithful. Afterwards, proceed to our hotel for the night. (B, D)

Depart San Giovanni and drive up to Monte Sant’ Angelo for a breathtaking view of the Gargano Peninsula and a visit to the Grotto of Michael the Archangel. Then drive to Manoppello where we will visit the Basilica of Volto Santo which contains an image on a thin veil which is known as the Holy Face of Manoppello and has been reputed to be the veil that covered Christ’s face during His burial and resurrection. After a brief visit of Manoppello we will continue to Rome for our farewell dinner at a local restaurant and overnight. (B, D) 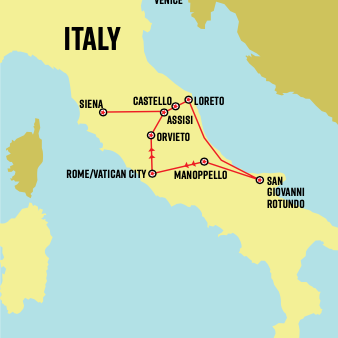